The two-story technical facility complete with two control rooms
With almost a third of the world’s population predicted to tune in to watch one or more of the FIFA World Cup soccer matches, the tournament has become one of the biggest international broadcasts of all time. So when the English speaking U.S. broadcast rights holders ESPN wanted to build temporary studio production facilities in Rio de Janeiro, they turned to Bexel, a unit of the Vitec Group’s Services Division and a leading worldwide provider of broadcast services and solutions.

The original concept for the project when it launched in November 2012 was limited to a small flypack located near Copacabana beach.

“When the broadcasters saw the beauty of the beachside location, they decided to build their main control room in Clube dos Marimbás, a Brazilian beach club,” said Joe Wire, Bexel’s vice president of Sales and Account Development. “So what started as just enough camera equipment to fit into a 20-foot shipping container soon grew into a 4,000 square-foot technical facility housed in its own custom-designed building.”

Since the FIFA World Cup competition takes place in 12 different stadiums, around the country, there was no central venue that could host the broadcasts. But, by locating the main studio right at the beach, there would always be something interesting happening behind the anchors’ and commentators’ desks to keep the pictures interesting.

Once it was installed, the studio’s entire infrastructure was built around an Evertz EQX 394 X 970 video router with all Grass Valley cameras, a Grass Valley K-Frame Kayenne 4 M/E digital production switcher and a Calrec Artemis 24 fader audio console.

“This project involved tight integration between Bexel and the U.S. rights holder,” Wire said, “and by the time we shipped the equipment in late April, the complement included 27 cameras, three control rooms and two production sets, all linked via fiber from the beach club to their main facility in Bristol, Conn.” 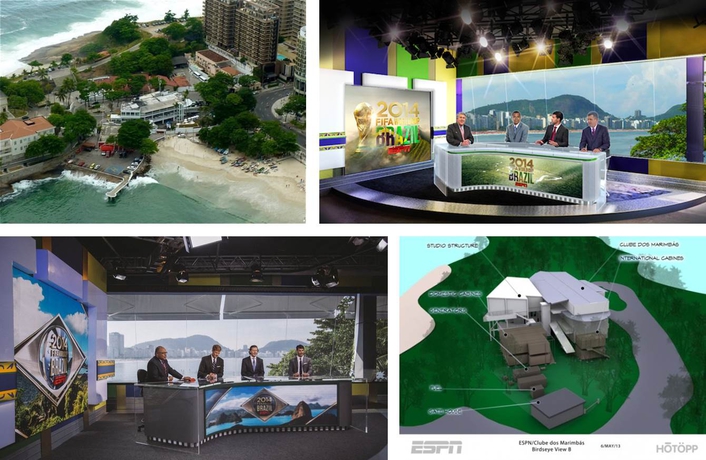 Once they started to build the gear into the Rio de Janiero location in May, there were two main challenges the Bexel team had to overcome: power and logistics. “Every country to host a large event presents unique challenges and Brazil is no different,” Wire commented.

Bexel’s crew had to conform to the Brazilian concept of how and when to work. “We learned to adapt to the city’s own regulations that keep trucks carrying containers over 6-feet long off the streets between 6 a.m. to 10 a.m. and 5 p.m. to 10 p.m.” Wire said. “Most of our unloading had to happen during the night. But adapting to those intricacies is just typical of the type of service that people have come to expect from Bexel.”

The two-story technical facility complete with two control rooms was completed on June 4 when Bexel’s team handed it over to their client after certifying that everything was up and properly functioning.

“Since we had to build the technical infrastructure inside the Clube dos Marimbás beach club, we were working in a defined space,” Wire said. “But by the time the games started to air, we had created a world-class broadcast facility on time, and within the specified budget at one of the most beautiful locations on the earth.”