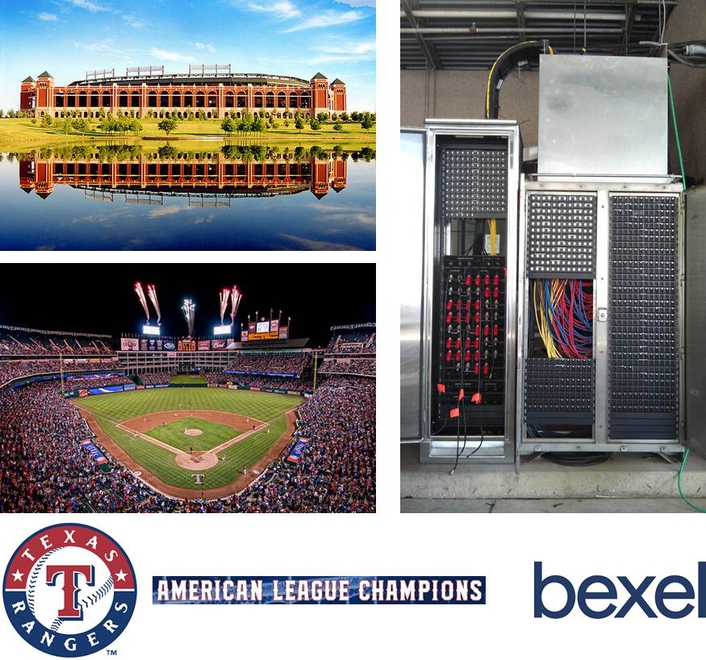 Broadcast Infrastucture Upgrade: Bexel Conquers Triax, Timing and Tornados for Facility Overhaul
When Opening Day festivities commenced at Rangers Ballpark in Arlington, Bexel, a unit of the Vitec Group’s Services Division and a leading worldwide provider of broadcast services, had just wrapped up a major broadcast infrastructure overhaul for the facility, a project that was completed in less than two months. To ensure the 18-year-old ballpark had full broadcast capabilities, Bexel provided an infrastructure makeover that included more than 70,000 feet of new triax cable while also adding significant audio and fiber to many positions in the venue.

“Our goal was to replace the majority of the broadcast infrastructure in time for Opening Day,” says Justin Paulk, manager, Bexel Broadcast Fiber Solutions. “To do this, our team was required to demolish nearly 10,000 pounds of existing triax—a significant portion of the old infrastructure. Once that was complete we had to install new triax cable, audio cable and fiber cable in the venue.  Bexel also provided on site coordination with the General Contractor for the new center field construction, ensuring that the cable runs required under Bexel’s contract and those associated with the new centerfield locations were closely coordinated to eliminate damage and maximize the efficiency of the installation.”

With an office located in nearby Irving, Texas, the Bexel team has had a standing relationship with the Rangers and is extremely familiar with Rangers Ballpark, having done work there over the last decade. “During the initial demo, we had to be very careful because we couldn’t just cut and remove everything; we had to make sure that we indentified and removed the correct cables,” adds Paulk. Following the demolition of the old cable, the Bexel team worked quickly to install 70,000 feet of new triax cable, 25,000 feet of 12-pair audio cables and 27,000 feet of 12-strand single-mode fiber.

In addition, the team equipped the facility with 96 new triax connectors, replaced all panels and re-terminated all of the existing audio and added 132 audio pairs. “Essentially we kept some of the newer existing triax that was installed when the scoreboard was updated several years ago, moved the existing audio cable over to the new panels and added more channels of audio and fiber. In all there are 126 strands of fiber now that didn’t exist before. The timing of this project was challenging, but the experience and efficiency of the Bexel crews allowed us to rise to the challenge and complete the overhaul before Opening Day,” says Paulk. Along with the specific upgrade for the Rangers, Bexel added SMPTE fiber cable for NHK (Japan Broadcasting Corporation), including two SMPTE runs to center field and six pairs of audio and six fiber strands to an auxiliary interview room, to cover pitching sensation Yu Darvish for viewers in Japan. “We also put fiber in for the local media including KXAS-TV, KTVT and Univision.”

“While the time allotted was a bit of a challenge, it was a job well-done by the entire team,” concludes Paulk. “Not only did our expertise in fiber solutions help ensure this, but our standing relationship with the venue was extremely valuable. Despite delays caused by recent tornados in North Texas, we completed the project in about two months. It was definitely an exciting project to be a part of for us.”

Bexel Expertise Forges Gr...Relationship with the NHL
Bexel Teams Up with the C...ing the 2012 Summer Games
Bexel Invests in EVS XT3