Charlie Cope, BBC Technical Executive @ the IBC during the London Olympic Gmes 2012
In 1948, the Games of the XIV Olympiad in London became the first-ever Olympics to offer live television coverage transmitted to the home. As the host broadcaster, the BBC delivered 60-plus hours of programming — including the first multicamera Olympics-event coverage — to more than a half million viewers within a 50-mile radius of London. Sixty-four years later, the Games have returned to London, and the BBC has once again taken a giant leap forward in the evolution of Olympic television production.

By the time the Closing Ceremony concludes on Sunday, BBC Sport had delivered more than 2,500 total hours of live Olympic programming over 17 days (1,000 more than from Beijing). In addition to 18 hours of coverage per day on BBC1 and BBC3, the BBC allowed UK viewers to watch every minute of the Games live via 24 dedicated “Red Button” channels (available to Sky, Virgin, and Freesat subscribers) that were also streamed to the Web and to mobile devices and tablets.

The 24 BBC Live Channels on Sky, Freesat, Virgin and Online

One example: The women's marathon
The women's marathon at the 2012 Olympic Games in London was held on the Olympic marathon street course on 5 August. Spectators on the course were able to see the athletes live and on their mobile devices. And the receiption was clear and without breakdown even during the rain storm when the race was started. The course started and finished on The Mall in central London. Runners completed one short circuit of 2.219 miles around part of the City of Westminster and then three longer circuits of 8 miles around Westminster, the Victoria Embankment and the City of London. The course was designed to pass many of London's best known landmarks, including Buckingham Palace, Trafalgar Square, St Paul's Cathedral, the Guildhall, Leadenhall Market, the Monument, the Tower of London and the Houses of Parliament. 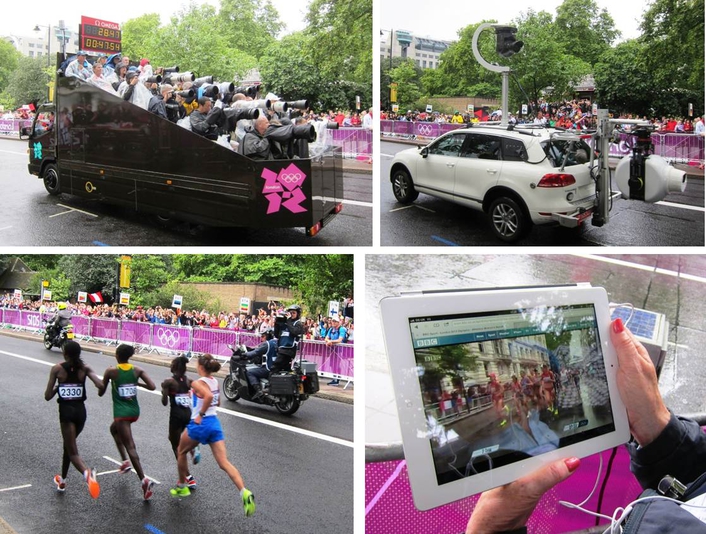 The Manchester move
To deliver this historic amount of coverage, the BBC was forced to take on an equally historic task: preparing for the largest UK sporting event in recent memory while relocating the bulk of its broadcast operations 200 miles north of its storied London headquarters. Over the past two years, BBC Sport has migrated much of its manpower and infrastructure to the new BBC North facility at MediaCity UK in Salford, Manchester, as part of an overall cost-cutting move by the BBC.

At the venues
In addition to taking in the OBS host feeds from each venue, the BBC had deployed more than 100 unilateral cameras, including about 20 ENG teams. SIS Live was providing the bulk of BBC’s mobile-production facilities while BBC's own OB truck was located at Weymouth Bay for the sailing events. At rowing and gymnastics the BBC also had operations, however without an OB truck. All the feeds were sent back to the IBC where the mix was done. Usually the BBC would have sent also an OB truck to the North Greenwich Arena for the gymnastics or to Eaton Dorney for the rowing, however to avoid doing massive duplication of resources the BBC relayed on the signals from OBS.

The BBC was providing commentary for all BBC1, BBC3, and dedicated-stream feeds, as well as for much of the host-feed commentary for OBS’s MDS (multichannel-distribution) feeds and its partners, such as NBC and Channel Nine.

At the IBC
The BBC had erected a massive operation at the International Broadcast Centre (IBC) in London, nearly doubling its staff from Vancouver and Beijing and establishing a sprawling infrastructure that linked directly back to BBC North. 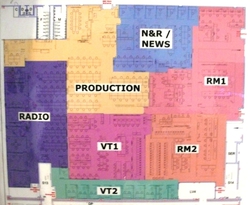 BBC Sport took in the dozens of OBS and unilateral feeds at the IBC, where three control rooms were equipped with Sony MVS6000 switchers handling the switching and commentary-control operations. Two additional control rooms located at BBC North received the 24 dedicated streams — 12 apiece — and distributed these feeds out to the Red Button channels and the Web. This pair of control rooms was also responsible for the FreeView Channels, which were running editorial content throughout each day.

The BBC was also running two separate graphics operations: one at the IBC for live output and one up north that inserted graphics for all its sports-news content, the 24 dedicated streams, and online VOD content. Deltatre was serving as a third-party graphics vendor.

The core to this workflow was the “multiplatform hub” at the IBC, which monitored all the incoming streams and determined when a story was about to break and needed to be covered immediately. 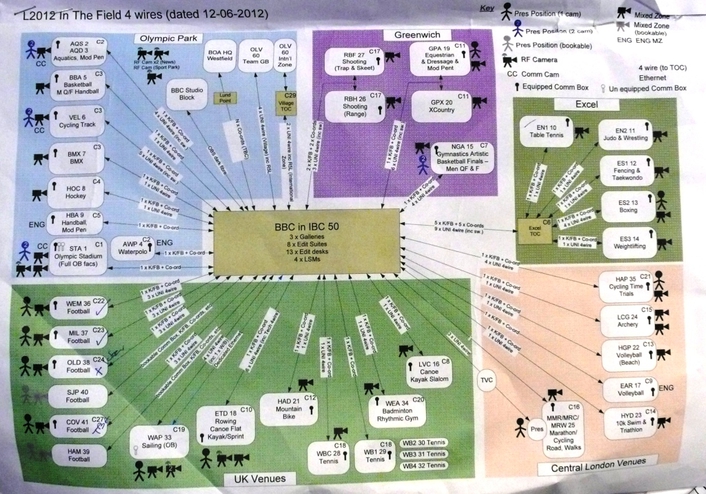 The feeds of 100 unilateral cameras were received at the IBC

Postproduction and archive
The IBC postproduction-system design was based on the BBC North workflow and comprised three main elements: server, ingest, and playout. An EVS IPDirector fed content into the WIK (work-in-progress) bucket, which was built on a Harmonic Omneon MediaGrid. All 21 on-site edit suites could access this content and published it back to the playout servers.

This system was also linked to BBC’s radio, news-service, and Olympic-venue operations to allow file-based exchange among the various operations.

In addition, BBC North, which used Apple Final Cut Pro editing systems, could view proxies of all content on the IBC servers and request a hi-res file when needed.

In terms of archiving, BBC Sport brought approximately 1,000 hours of archival content to the IBC and loaded it on its main servers for production of the Games, but it left with much more than that. The BBC was running a constant rolling archive of all host, edit, and ENG material, cummulating to about 1,500 hours of file-based archive which was taken up north by the time the Games conclude. All logging was handled at BBC by a team of 30 loggers synched with the IBC archival system.