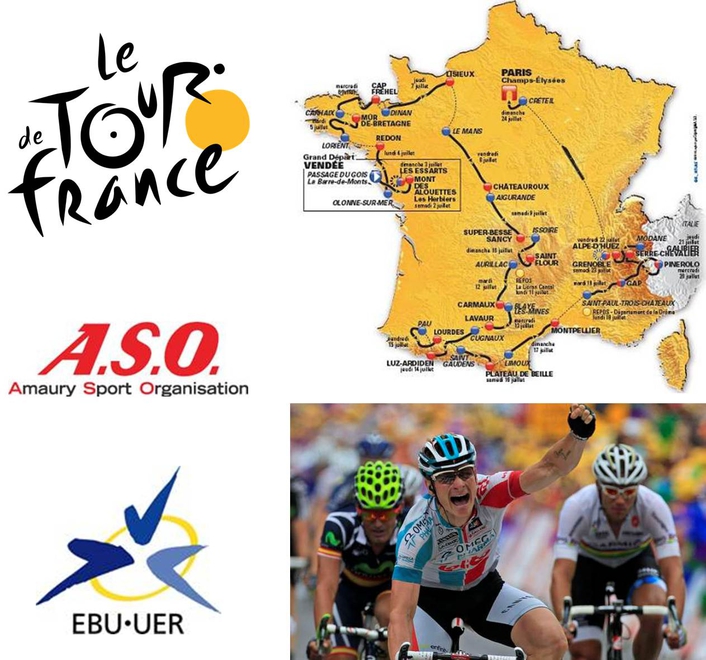 Much of Europe watches cycling's most prestigious race under an agreement between the EBU and ASO
The Amaury Sport Organization (ASO), the organizer of the Tour de France, and the European Broadcasting Union (EBU), its broadcast partner for Europe, are reporting very high audiences since the start of this year's Tour de France.

EBU Member TV2 Norway has reached a 41.33% average market share since the start of the race, while in the Netherlands, NED1, the main channel of Dutch public-service broadcaster NOS has achieved a 45.65% average market share. NED1 posted its best audience since 2007 for a Tour de France with 1,456,000 viewers for the Sunday 17 July stage, which is 52.80% of market share.

TV2 Denmark has attracted an average of 418,000 viewers (and a 54.8% share) for its live coverage of the Tour de France this year, outperforming the channel’s average market share.

At the same time, the two public-service broadcasters in Belgium are posting astonishing figures. ÉEN, VRT’s main channel, has recorded an average market share of 66 %, even reaching the outstanding figure of 76.52% last Saturday for the stage arriving at the Plateau de Beille. RTBF also peaked at 42.30 % for the same stage.

A number of national broadcasters in other countries have also reported strong viewing figures. In addition, audiences on the pan-European channel Eurosport have so far increased compared to the last Tour de France. The last stages of the Tour de France in the Alps should even provide ASO and EBU Members with higher audience figures.

In April, ASO and EBU renewed their partnership for another four years in an agreement that includes the Tour de France and all other cycling races organized by ASO until 2015.

The EBU serves 85 national media organizations in 56 countries in and around Europe. It represents its Members and promotes the values and distinctiveness of public service media in Europe and around the world. The Eurovision and Euroradio networks deliver news, sports, events and music to EBU Members and other media organizations. Services to Members range from legal advice, technical standardization and development to coproduction and exchange of quality European content.

Amaury Sport Organisation is a company that owns, creates and organizes major international sports events. A.S.O., a subsidiary of Editions Philippe Amaury, organizes 200 competition days per year for 50 events, such as the Tour de France, the Dakar Rally, the Paris Marathon, the Alstom French Open golf tournament. A.S.O. has in-house expertise in all the various sectors linked to organizing, marketing and media coverage of sports events.