Francis Tellier and Jeremy Cole, CEO and Chairman of IGBS 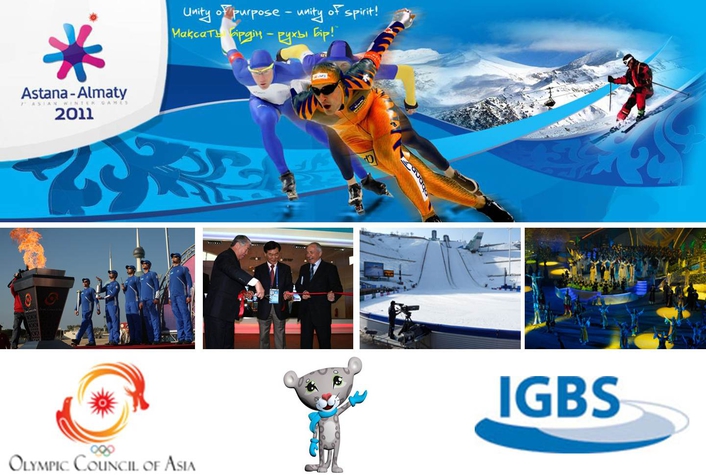 Akhmetzhan Yesimov, Mayor of Almaty, opened the IBC on 26 January alongside SICC CEO Lee Yoon-Ho and IGBS CEO Francis Tellier
With the 7th Asian Winter Games Astana-Almaty 2011 about to reach their conclusion with this evening’s Closing Ceremony, IGBS would like to take a moment to look back on an extremely successful event.

In cooperation with our partners at SICC and AWAGOC we have been able to deliver impeccable coverage of the event, achieving an Olympic production standard.

Based on our cumulative experience with winter Games, we were aware that weather would likely play a part and prepared appropriately. We were therefore able to implement back-up plans and find successful solutions to each challenge as it arose.

This event has also given us an opportunity to make new friends in Kazakhstan, both in the Organising Committee and among the thousands of extremely helpful volunteers. It has been an honour to be able to pass on our experience and know-how to our broadcasting associates in Astana and Almaty.

Feedback from Rights Holders towards IGBS’ services and assistance has been overwhelmingly positive, and it is this knowledge which makes the intensive period of preparation and the long event time hours of our staff worthwhile.

Though final figures are not yet available, Rights Holders tell us that they can safely say that several hundreds of millions of viewers across the world have followed the event.

All that remains is to thank all involved for their participation at the 7th Asian Winter Games and wish all of our Rights Holders, associates and staff a safe journey back home.

The 8th Asian Winter Games are scheduled to take place in 2017 with the Japanese city of Sapporo awarded the honour of hosting the event. This will be the third time that the city has hosted the Games following the stagings in 1986 and 1990.

The decision was announced at the 57th OCA Executive Board meeting at the Ramada Plaza in Astana on 31 January. With Aomori also having hosted the Asian Winter Games it will mean that Japan will have staged four of the eight editions of the Games.