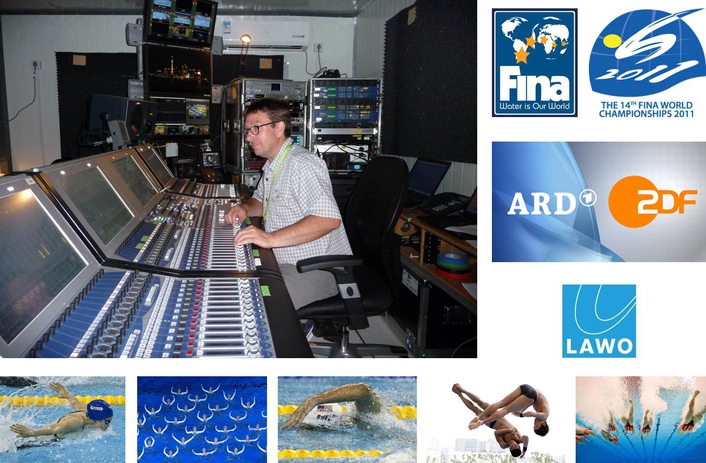 MPE Administrator Horst Dünchem on the mc²56 in the Shanghai IBC
In July the Mobile Production Unit (MPE) belonging to ARD and ZDF, Germany’s nationwide public broadcasters, was put to good use at the FINA Swimming World Championships in Shanghai. Now the MPE is on its way to Korea, or, more precisely, to Daegu, where it will be used for broadcasting the IAAF World Championships in Athletics. Very much on board is technology from Lawo, providing excellent audio feeds from both super sports events.

The MPE is equipped for both events with a Lawo mc²56 in a 16-16C frame with two extensions of 16 faders each, which brings the overall number of faders up to 64. Seven DSP cards (one of which is used for redundant cover) provide 336 DSP channels, out of which 288 DSP channels are used actively. In Shanghai, everything was mixed on the mc²56 but not, however, in surround sound, as the host broadcaster, CCTV (China Central Television), only broadcasts in stereo. The MPE’s administrator, Horst Dünchem, had to adapt the unit’s setup to cope with the limited space available on site. This was — apart from reliability and the redundancy design of Lawo consoles — one of the main reasons for choosing a mc²56, which is perfectly qualified for applications like this. Fast access to any channel functions is guaranteed by the console’s Reveal function.

Planning started in March 2011 and, by the end of May, the MPE was shipped in six 20-ft containers from the port of Mainz in Germany (on the Rhine) via Rotterdam to Shanghai; the containers arrived in early July. At the International Broadcast Center (IBC), offices and control rooms were erected, and this is where all the broadcast equipment was installed.

16 different sized containers were provided to house the technical equipment, control rooms, the editing staff, plus offices for ARD and ZDF, all with ample air-conditioning. The central control room measured around six by eight metres. This accommodated the studio control and editing areas as well as space for EVS operators, a virtual technology unit, the video mixer and an audio control room for live broadcasts. The other containers hosted three AVID edit suites, one audio mix area and a well-cooled equipment room with a video matrix, the AVID network, the EVS network, the Lawo console’s HD core and two matrix nodes for the Riedel talkback system.

Another room housed the Master Control Room for the technical control of broadcast outputs, the on-air broadcast scheduling crew, and camera control for five cameras (for national coverage in addition to the international feed). International feeds from the host broadcaster, which were used for transmission to Germany, included those for water polo, diving, open water swimming and the short-distance swimming competitions.

In the swimming hall, there was one commentator position for swimming, one presenter location and one flash interview location in the mixed zone and, if required, also in the athletics’ block. In all, 15 DALLIS frames were used in different areas, all supplying signals to the Lawo mc²56.