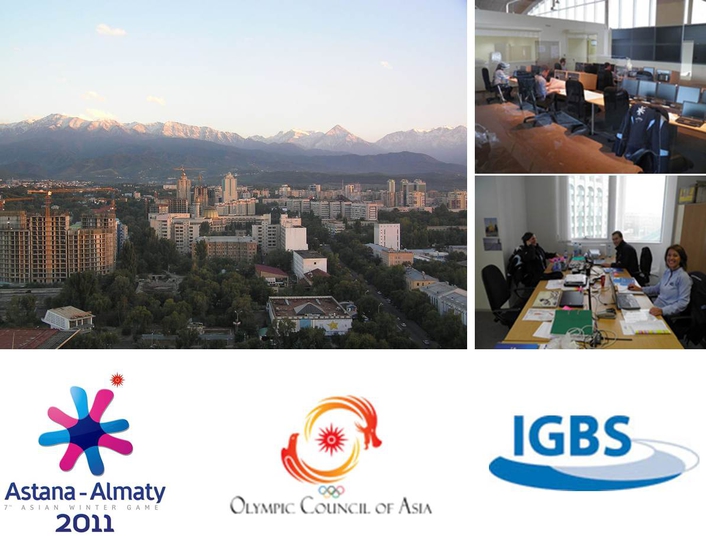 The Contribution, Distribution and Transmission Room saw early action as the IGBS team run through their final checks and tests
As scheduled, the International Broadcast Centre for the 7th Asian Winter Games Astana- Almaty 2011 became fully operational on 10 January, marking the symbolic start of IGBS’ event-time period, but dozens of experienced IGBS staff members have been based in Kazakhstan for months, working in close collaboration with the Olympic Council of Asia (OCA) and the Astana-Almaty Asian Winter Games Organising Committee (AWAGOC) in order to develop and implement a broadcast plan of unprecedented scale and ambition.

Over the last few weeks hundreds of additional personnel have joined the “locals” at the IBC and at the ten venues in order to receive event-specific training and put the finishing touches on the preparations. The IBC, based in the Almaty Towers complex in the city’s business district, has already welcomed the staff of IGBS – who are making the final preparations ahead of the forthcoming Games – and will shortly see the arrival of its first Rights Holders.

The host broadcast of the 7th Asian Winter Games will include all 11 sports as well as the Opening and Closing Ceremonies, with between 13 and 32 High Definition 16:9 cameras covering every event. IGBS has contracted over 800 staff members for the event, gathering broadcast industry veterans from all over the globe, including around 100 local hires. These staff members are working in rotating shifts, allowing for true 24/7 operations over the course of the Games.

As always, it is IGBS’ intention to build on the experience gained from its previous host broadcasting projects to raise the bar still higher. This objective is reflected in the company’s considered implementation of technological innovations as well as its methodical recruitment of experts in each of the specific domains involved in its operations.

On January 11, 2011 the Flame of the 7th Winter Asian Games (WAG) was lit at the Kuwait –Towers building which also is the headquarters of the Olympic Council of Asia (OAC). On January 12 the Asian Games Flame was delivered to Almaty, Kazakhstan. The subdivisions of the Emergencies Ministry of Kazakhstan received the high honor to deliver the Torch to Kazakhstan. A TU-154 plane of the Ministry with the Torch on board landed in Almaty. After the official welcome ceremony the Torch Relay processed to the major streets of Almaty and the regions. On board of AN-30 plane the WAG Flame now is traveling around the regional centers of Kazakhstan and finishes in Astana on January 30 on the Astana-Arena football stadium in the very climax moment of the WAG opening ceremony. During the entire trip the Torch will be accompanied by a camera crew with a mobile TV studio that will put daily reports about the Relay on the major TV channels. The Relay is going to be a nation-wide project; millions of Kazakhstanis in the most remote regions of the country will feel involved in the Asiad. 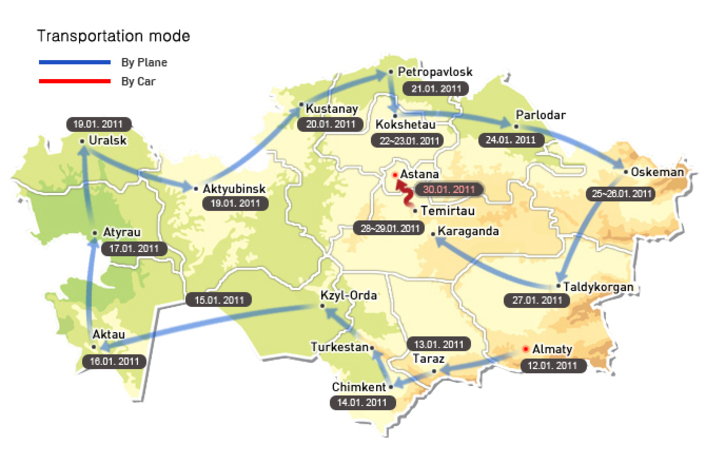 The Torch across Kazakhstan

The Torch Relay will be a great incentive for the development of sport industry in Kazakhstan, especially children’s sport. That is why the age of torchbearers was changed from traditional 16 years old to a younger age; therefore the majority of the Relay participants are children talented in sports. 800 torchbearers have been selected. The main criterion: active sport and life position, patriotism, commitment to ideas of Olympics.

The 7th Winter Asian Games 2011 is not merely a sport event to Kazakhstan, but also a meaningful political event to which President Nursultan Nazarbayev gives particular attention. 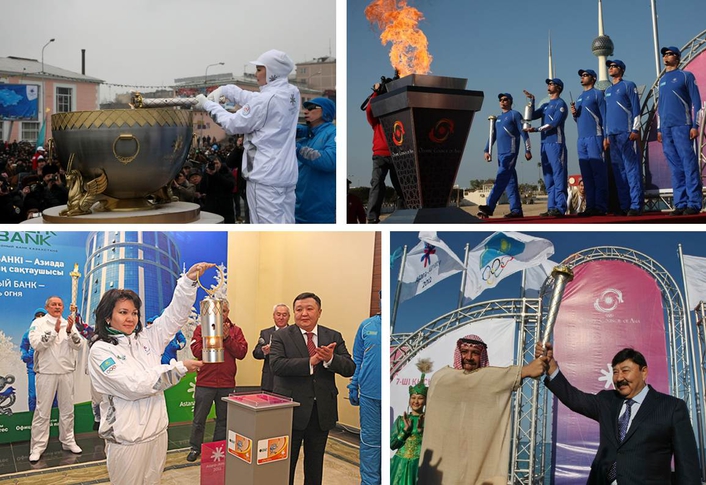 The torch on ist way in Kazakhstan

A note on the contractual environment of the 7th Asian Winter Games Astana-Almaty 2011 host broadcast:
AWAGOC initially contracted SsangYong Information & Communications Corp (SICC) for the provision of data, graphics and host broadcast services at the event. SICC, which has been successfully involved in several international sport events, including a previous partnership with IGBS at the 15th Asian Games Doha 2006, then contracted this latter function to IGBS.

IGBS, formerly DAGBS (Doha Asian Games Broadcast Services), is a unique joint venture between HBS and IMG Media which was set up in September 2004 with the mission of being the Host Broadcaster of the 15th Asian Games Doha 2006. It has since provided production teams for the 16th Asian Games Guangzhou 2010.
The combined skills and experience of the two parent companies make IGBS a genuine and unique “turn-key” Host Broadcaster, drawing experienced personnel and expertise from the top levels of the television industry. The company’s head office is in Zug, Switzerland. Its Chief Executive Officer is Francis Tellier and its Chairman is Jeremy Cole.