.
The Riot World Championships is officially the most watched eSports event of 2014. More than 27 million people tuned in to the League of Legends tournament, which ran from September 18 to October 19 earlier this year. In September the top teams from the American, Asian and European Leagues got together for the group matches (in Taipei and Singapore) to qualify for the quarter finals in Busan, and the semifinals and the final in Seoul.

Due to the excellent performance TV Skyline has shown during the production of the European League of Legends matches in Paris and Cologne, Riot Games has placed the order for the group phase and the knock-out matches up to the final in Seoul again with TV Skyline. For the European matches the Ü7 OBVan was on location, however for the Asian tour with stages in Singapore, Taiwan and South Korea TV Skyline needed to set up two high spec flight packs. 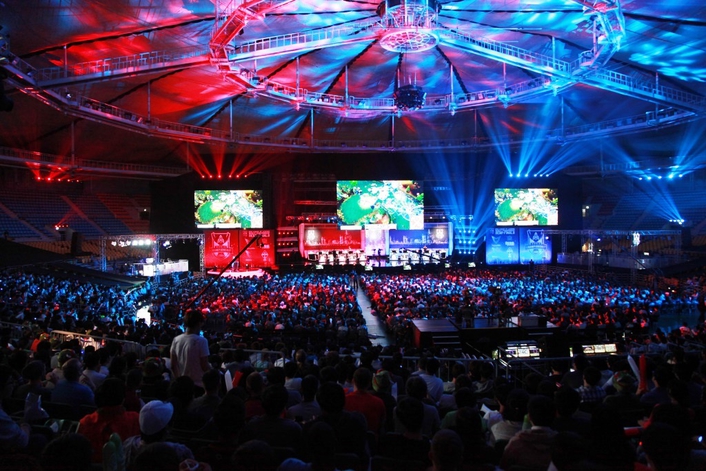 Each match was covered with a minimum of 19 cameras: 10x HD:1200 POV cameras from LMP were recording the 10 players (five in each team), while 9 broadcast cameras (including a wireless and a remotely operated crane camera)were covering the action within the spectators  at each location, at the interview positions and at the commentator positions in the studios. In addition to the production of the world feed the flight packs have also to produce the signals for the LED walls, send 22 signals to the US (for ESPN) and deliver the requested clean and dirty feeds for the Korean, Chinese and Taiwan rights holders. At each location also up to 30 monitor positions needed to be served with various signals. 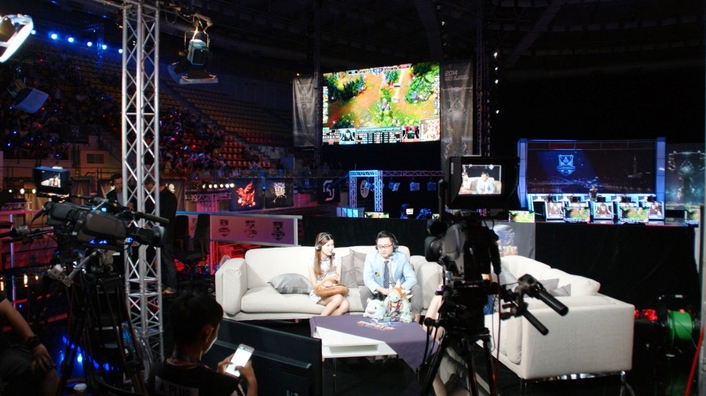 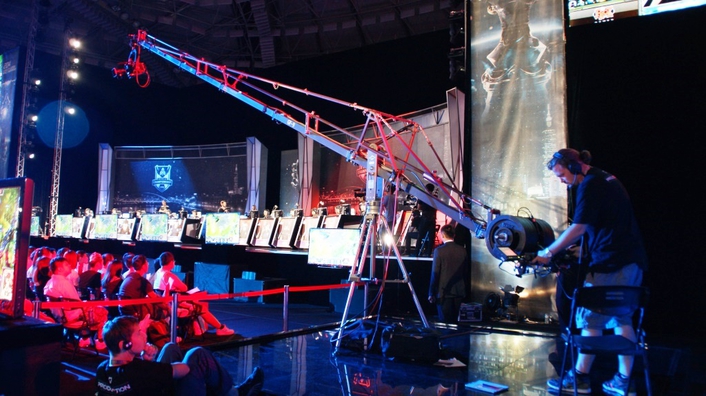 To reflect these requirements TV Skyline had built each of the two flight packs with 48 embedders and 48 de-embedders. Part of the flight packs are four stage boxes, each with eight signal paths while one stage box also includes a 20x20 router to deliver the requested signals to the monitors. The main products in each flight pack are a Sirius 830 hybrid router from Snell, a Kahuna 360 vision mixer with Maverik panel, EVS servers, a Lawo mc²56 audio mixer and a Riedel Artist intercom matrix – all managed via a redundant VSM server from L-S-B. 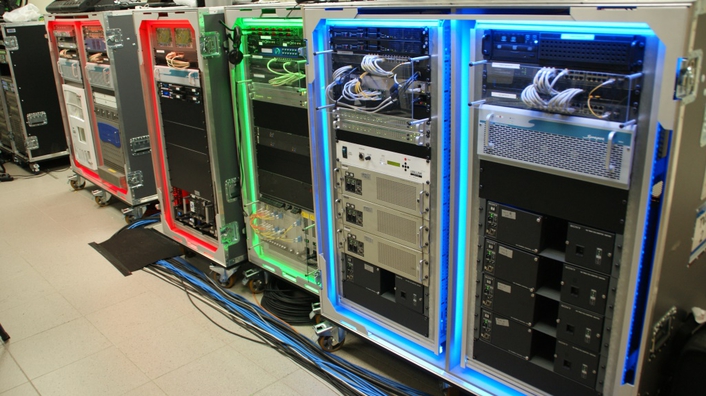 Under the leadership of Laurent Schlitz (Technical Manager at TV Skyline) the whole set-up and integration of the flight packs were realized in-house. This was quite helpful for the first productions at the other side of the world, because the team was aware of every detail of the system. Also every product in the system down to the BNC connectors was brand new. Every product was labeled, listed and packed in the particular cases according to the carnet that was necessary to deliver the equipment to the four countries in Asia. 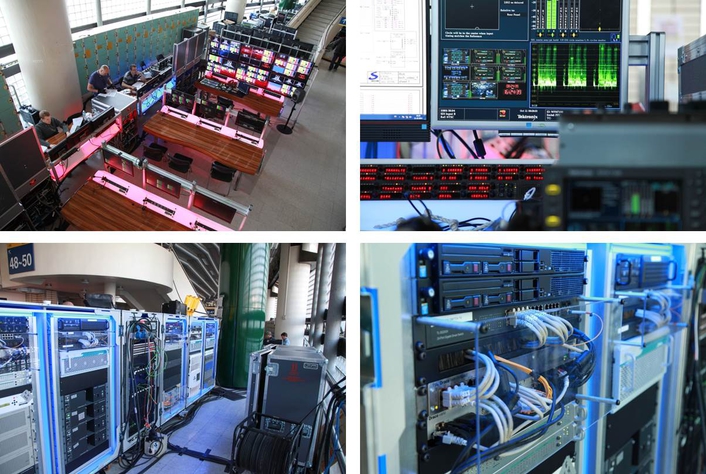 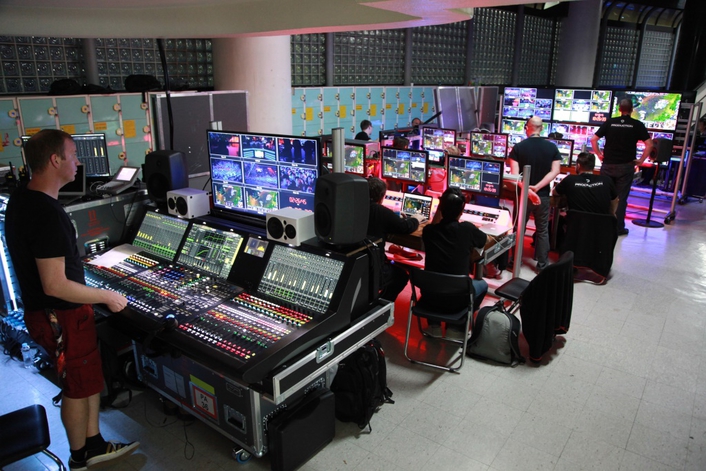 For the final in Seoul both fly pack systems were combined to one to achieve the requested 43 camera production, this included a Steadicam, a camera on a drone and three crane cameras. About 50,000 spectators watched the final live in the stadium and another 20,000 watched the match at the public viewing area next to the stadium. About 100 dancers and Korean drummers involved in the opening ceremony of the final highlighting the performance of the Imagine Dragons with their hit “Warriors”. After the team Samsung Galaxy White das beaten the Star Horn Royal Club by 3:1 and was crowned as the winner of the competition the Imagine Dragons kept the energy in the stadium on a high level with a 20 minutes live performance.

The successful completion of this project is another mile stone in the history of TV Skyline. And due to the high acceptance of this Esport event in Europe, America and Asia RIOT already has started the planning for the next years together with TV Skyline. It also was a big year for eSports, and the Riot World Championships really was the culmination of it for eSports as a whole, not just for League of Legends. 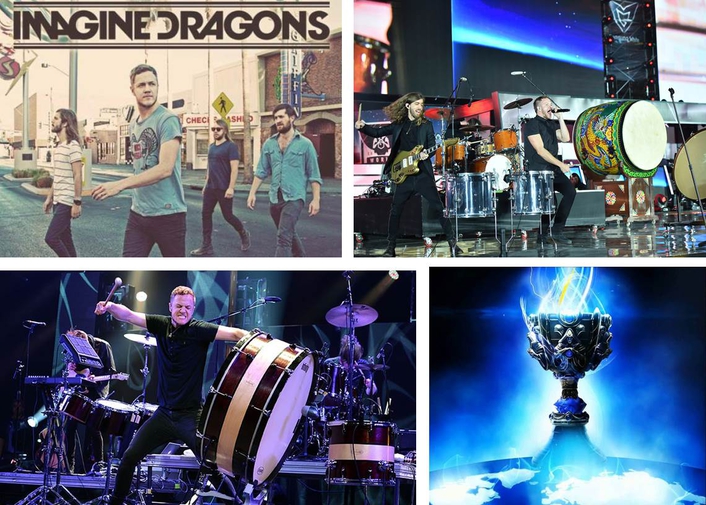 Fans watched over 179 million hours of eSports during this year’s World Championships. It’s impressive to see viewer engagement increasing on such a level—especially since the games were broadcast before most people in North and South America were out of bed—broadcasts started just before 3am ET and lasted for more than six hours. That’s one of the key reasons eSports will continue its meteoric rise, even if events like the finals saw less overall viewers this year compared to last. However the kind of fan engagement is increasingly rare in our always online, fast-paced culture. It’s the kind of number that advertisers dream about.