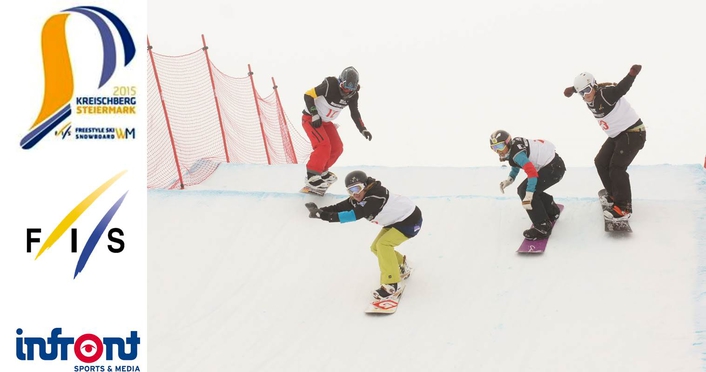 Elite event in Kreischberg (AUT) to be transmitted almost throughout 100 territories by close to 30 broadcast partners
The International Ski Federation (FIS) and Infront Sports & Media, as its exclusive media rights partner for the 2015 and 2017 FIS Freestyle and Snowboard World Championships, have achieved superb levels of media interest for the upcoming event which showcases both disciplines for the first time alongside each other in Kreischberg, Austria from 15 - 25 January 2015.

Handling the rights for all forms of television, internet and mobile devices for the event (excluding the host territory), Infront has negotiated broadcast coverage into almost 100 countries and territories. Agreements for the FIS Freestyle and Snowboard World Championships have been sealed with close to 30 broadcasters with full HDTV coverage guaranteed worldwide.

Tailor-made offering complement HDTV signal
The host broadcast operation is being handled by ORF – the Austrian national public service broadcaster – with all races produced in HDTV. Besides the live and delayed international feed, Infront also offers additional tailor-made programming such as highlights footage and interviews, based on client’s need.

Up to 12 commentary positions have been booked by broadcasters to provide up-to-the-minute detail of the action from the slopes. Over 150 media representatives across television, print and online media will be present at the event reporting extensively over the full ten day schedule. 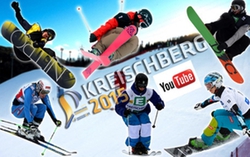 Digital coverage complements global outreach
Furthermore, Infront together with the FIS is providing live online programing free-of-charge which encompasses all FIS Freestyle and Snowboard World Championships races in full length on dedicated YouTube channels www.youtube.com/FISFreestyle and www.youtube.com/FISSnowboard worldwide – for countries where no exclusive media rights agreements are in place.

As a first for FIS disciplines, daily video tweets will be also distributed from the FIS Freestyle and Snowboard Twitter accounts to target the widest possible public of already existing and potential fans.

Marcel Looze, FIS Marketing Manager, said: “This year the total coverage of the FIS Freestyle and Snowboard World Championships is reaching a new level. Infront has taken an innovative and all-encompassing approach using television and digital platforms to bring the World Championships to a global audience.”

Bruno Marty, Executive Director Winter Sports at Infront, added: “Thanks to our extensive involvement in FIS flagship events, we have been able to draw from existing expertise, network and sales capacities to maximise exposure for the competitions in Kreischberg. A high-quality live feed and tailor-made programming significantly enhanced the appeal for broadcasters. Coupled with our digital outreach via YouTube and Twitter we are convinced this will be a record breaking year for the FIS Freestyle and Snowboard World Championships and a strong base for the future development of these two youth oriented disciplines.”

Background on the FIS/Infront partnership
Infront supports the successful development of international skiing through its involvement across multiple flagship events and disciplines. As a partner to the FIS, it holds all commercial rights and handles media production for both the 2019 and 2021 FIS Alpine as well as FIS Nordic World Ski Championships. This is complemented by a role as exclusive media partner for the 2015 and 2017 FIS Freestyle Skiing and FIS Snowboard World Championships (excluding the host territories).

Infront is also the commercial partner of all national skiing federations (except for Austria) that host the FIS Alpine, Cross-Country, Ski Jumping, Nordic Combined, Snowboard and Freestyle Skiing World Cup events. Managing the media and/or marketing rights of more than 90 per cent of the FIS World Cup events on a collective basis, Infront ensures the effective co-ordination of television coverage, high broadcast standards and an exciting television showcase for the competition.

About Infront Sports & Media
Infront Sports & Media is the most respected sports marketing company in the world, managing a comprehensive portfolio of top properties. Led by President & CEO Philippe Blatter, Infront covers all aspects of successful sporting events – including distribution of media rights, sponsorship, media production and event operation – and has won a reputation for its high standards of delivery. As the number one player in winter sport and with a leading role in football and summer sports, Infront enjoys long-lasting partnerships with 160 rights-holders and hundreds of sponsors and media companies. Headquartered in Zug, Switzerland, Infront has a team of 600 experienced staff working from 25 offices across 12 countries, delivering 4,000 event days of top class sport around the world every year.