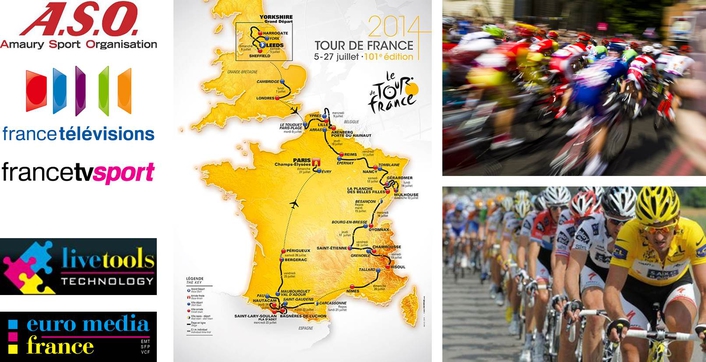 Since Christopher Froome’s victory on the Champs Elysées on 21 July last year, France Télévisions, host broadcaster of the Tour de France on behalf of Amaury Sport Organisation (A.S.O) and Euro Media France (EMF), wireless technology services provider for France Télévisions have been working non-stop, together with A.S.O, in order to offer television audiences around the world numerous technical innovations that will provide the 2014 edition of the Tour de France with the best broadcasting technology available.

Improved image quality
A F12 2000 lx sensitivity is what the new LDX cameras installed on the five video recording motorcycles will be offering on the Tour. The close collaboration between Livetools Technology (a Euro Media France subsidiary) and Grass Valley resulted in the development of a new camera platform that offers both exceptional image quality and the highest degree of usability ever. Thanks to the ultra-compact CA developed by Livetools Technology (code name: Colibri), the camera operators will benefit from the lightest, most compact and best-balanced camera on the market. Connected to the Livetools Technology HD-Runner III wireless camera transmitter, the motorcycle footage will now be capable of delivering signals in the 1080p50 production format. 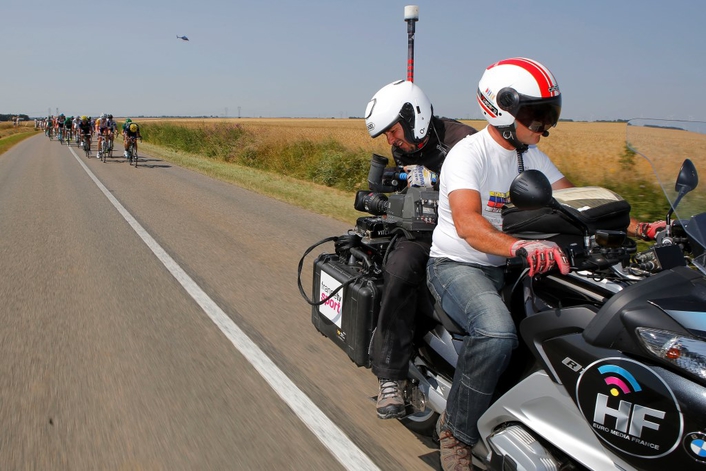 New immersive surround sound
For many years the Tour de France sound was recorded in stereo. This year, long hours of R&D work carried out jointly by France Télévisions and Euro Media France will result in the addition of a third audio channel for surround sound recording. The use of digital microphones with excellent directivity will not only ensure remarkably low coloration of off-axis sound but also localisation accuracy for the recordings without affecting the sound. This is an innovative technical solution that will immerse the television viewer completely at the heart of the peloton.

A definite goodbye to analogue
Yet another major innovation concerning sound will make its appearance in this year’s Tour de France. Motorcycles capturing sound on behalf of France Télévisions journalists and consultants will make full digital recordings. This has been made possible thanks to the software development of the Livetools Technology transmitters that strike a balance between quality, resistance to latency and spectrum occupancy, which puts an end to analogue and its sound interferences for France Télévisions journalists and the Tour de France.

Ladies First!
During the « la Course by le Tour de France » women’s cycling event organised by A.S.O.  the cyclists will arrive on the Champs Elysées on 27 July, before the last stage of the Tour. The event will be broadcast live on France 3 and EMF will install, on behalf of France Télévisions, two on-board cameras in the women’s peloton so as to test innovative picture taking during a race and to evaluate the editorial input of such a set up.

A connected peloton
In addition to the sound and video, Euro Media France together with UCI, and on behalf of France Télévisions is also setting up a data collection network destined to render the entire peloton « connected ». Absolute positioning of all the cyclists, climatic conditions, and performance indicators: a setup like this will place cycling at the cutting edge of TV production and media content technology.

About  France Télévisions
France Télévisions, first french broadcasting group with 5 national channels, France 2, France 3, France 4, France 5 and France Ô and it regional network and overseas, stands out as the main French television offer by collecting more than a third of the national audience. Composed of channels with strong identities and complementary, the group is present on all the programs and offer each time a real choice for the televiewer. Satellite, TNT, ADSL, Internet, Mobile telephony, tablet, connected TV … The transfers accelerate, supports multiply, the practices diversify … France Télévisions anticipates and adapts itself to the new technologies to be always closer of the  expectations and needs of the televiewer. France Télévisions is in fact the official diffuser of the Tour de France and radiodiffuser host of “La Grande Boucle” for Amaury Sport Organisation within the framework of a partnership renews until 2020.