2011 IIHF World Championship is a global television and marketing success 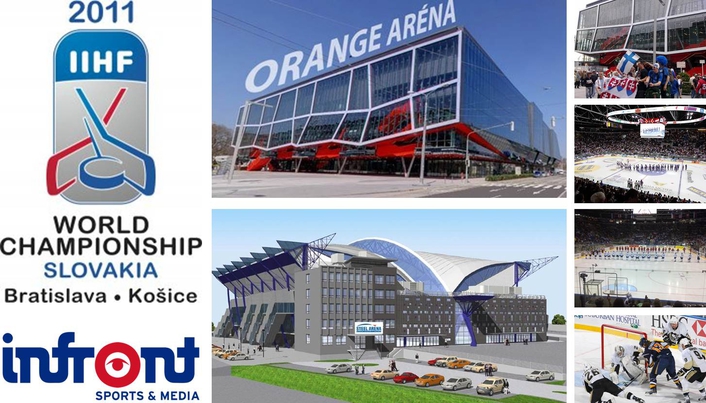 Infront is handling marketing, media rights and media production of the 75th edition, hosted by Slovakia for the first time
The 2011 IIHF World Championship faced off on 29 April in Bratislava and Košice, Slovakia. Until 15 May 2011, 16 teams will play a tournament of 56 games to establish this year’s world champion.

Infront Sports & Media has successfully handled the marketing and media rights of the event for 30 years in a long-term relationship with the International Ice Hockey Federation (IIHF), which has generated many benefits for the sport and its commercial partners. This year, 14 international and local sponsors will be involved, enjoying the global television coverage and exposure provided by the event’s 70 broadcast partners.

Ice hockey fans over the world have access to extensive media coverage of highest quality. Broadcast in over 100 countries and territories worldwide with national free-to-air coverage, with either live or near-live transmissions depending on the time zones and schedules. In addition, there are high levels of interest in news access. Fans in Slovakia are watching games on public television network STV and in Russia on RTR. In North America games are available on Versus (USA), TSN and RDS (Canada). Even fans in Africa, Asia and Oceania are able to watch the event.

The group of commercial partners for the 2011 championship will all benefit from their involvement, not only in terms of brand exposure but also from the positive image association of being connected with international ice hockey’s premium event. In 2010, media exposure reached an all-time high – the cumulative television audience peaked at 734.7 million.

Škoda (Cars - Czech Republic) is the Official Main Sponsor and Official Car Partner for the tournament. The company has been involved since 1993 and this year will be promoting its new corporate identity that enhances the attributes and features of the brand – communicating both freshness and precision.

The Official Sponsors of the IIHF World Championship are very much involved in making the event a success, providing many additional activities and enhancements for fans and demonstrating their products and services in an attractive environment.

Bruno Marty, Infront’s Executive Director Winter Sports, said: “The IIHF World Championship event has proved itself time and time again as one of the most effective winter sports sponsorship platforms available worldwide – attractive to international brands and local partners in the respective host country. There has been continual growth in television coverage since 1998, with a record cumulative audience of over 734 million in 2010. This underlines the popularity of the annual IIHF World Championship with fans and guarantees worldwide exposure to the sponsors. For this year, we expect the TV figures to remain on a high level and pass again 650 million.”

Avid ice hockey fans are pleased by the additional option to view all games on the internet via a dedicated online broadcast service — fully integrated into the official federation website www.iihf.com. Infront has developed a flexible system allowing live and on demand coverage for supporters to select games or subscribe to a tournament pass (one-off fee of 39.95 Euros) or a ‘Follow your team’-pass (24.95 Euros). Single games are available at 6.95 Euros each.

Furthermore, Infront offers free footage via a dedicated IIHF channel on the online video platform YouTube: www.youtube.com/icehockey. Users can enjoy a variety of 2011 IIHF World Championship content, including: daily highlights of all four games, best-of clips, emotional highlights and even selected full-length games (available two days after game play). Access is only geo-blocked in a few countries where conflicting media license agreements are in place.

The role of Infront Sports & Media

Infront is the exclusive commercial partner to the International Ice Hockey Federation (IIHF) – a role it has occupied since 1981 - and handles media and marketing rights for the IIHF World Championship and Division 1. This long term relationship enables all previous experiences to be carried forward to support the local organising committees for each event. The group has been introducing innovations and improvements to its services on a consistent basis, including host broadcast production, a dedicated online broadcast service, B2B client servicing, graphic design and VIP hospitality.