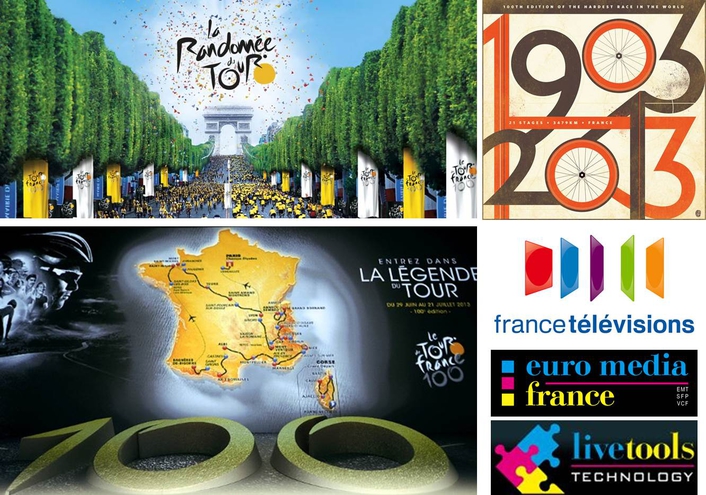 And they're off!
The centenary edition of the Tour de France started in Corsica and finished on July 21, on the Champs-Elysées. A total of 87 people pulled on the Euro Media France jersey this year! The team provided three weeks of ever more stunning coverage for viewers in 190 countries, including a number of technical feats and exploits, thanks to Livetools' digital transmitters and receivers.

Chris Froome, the first Tour winner born in Africa, triumphed in a race that also saw the first African wearer of the Yellow Jersey, Daryl Impey. The internationalisation of the event was also evidenced by Colombia's breakthrough in the figure of Nairo Quintana, and was confirmed on a larger scale through a new generation of cyclists, in the riders who fought for the title and the circle of sprinters.

The winner attitude, à la Froome
Chris Froome won the Tour de France at the age of 28 in his third participation in the race. Although we are not talking about records of youngest-ever winners or unexpected victories, Froome's arrival corresponds to a certain logic but is also the result of a break with the past, even with the conservative strategy that the Sky team used for Bradley Wiggins a year earlier. Dominating the race like a great favourite for the Tour should, Chris Froome was capable of adding his temperament to his odyssey, attacking more than necessary, spurred on by a sense of spectacle and his love of taking on the field in the mountains. The conquering stance of “Froomey” was a reaction to the non-stop ‘rebellion' by his rivals, who never threw in the towel at any time.

In the face of such superiority, Alberto Contador and his Saxo-Tinkoff team-mates tried the hardest to turn the tables. They increased their offensive as the race went on and the previous winner chose to take risks in his reluctance to be ejected from the podium at the end of the Tour. Although the Spaniard never gave up, he nevertheless showed the limits that make his return to former glory more difficult. Even so, Contador's fourth place is by far the best result of the previous winners who took part in the 100th edition of the race. Riders such as Andy Schleck and Cadel Evans were even more affected by the emergence of the new generation, finishing 20th and 39th respectively in the overall ranking. Nevertheless, the ‘oldies' put one of theirs on the podium: 34-year-old Joaquim Rodriguez, who gained 7 positions in 6 stages to end up in 3rd place.

A revelation called Quintana … and an American future
The game was played at quite a distance behind Froome. However, the winner of the battle for second place helped to give the 2013 Tour the feeling of a generation change. Nairo Quintana, wearing the polka-dot jersey he first won at Semnoz, in the best tradition of the Colombian climbers of the 1980s, also stepped up to the plate and will continue to play a leading role in the future. Perhaps the white jersey will give Froome a good battle on the roads of the Tour starting from next year.
North America also discovered some new talents during the event, not in the form of Tejay Van Garderen (who clearly went backwards in comparison to 2012) but through Andrew Talansky. The Garmin-Sharp rider ended his first Tour in 10th position, and second in the ranking of young riders, despite a lapse in the Bagnères-de-Bigorre stage that cost him around seven minutes. In this particular hierarchy, he outstripped the Polish rider Michal Kwiatkowski, another prospect for the future, if only by improving his performance in the mountains during the third week. At 23 years of age, the sky is the limit.

Sagan controls the green jersey
Twenty-three is also Peter Sagan's age. He has no ambitions vis-à-vis the general classification but plays the role of the man in green with enormous success. The Slovakian rider completely understood the nuances of the points classification and ended the 2013 Tour with almost 100 points more than Mark Cavendish; and all this with one stage won as opposed to three in 2012. With a top speed only very slightly below that of the best sprinters, Sagan had to prematurely eliminate his opponents by carrying out – together with his  Cannondale team-mates – a brilliant coup de force on the road to Albi on his way to his only stage win of the year in the Tour.
In a similar style, but on the flat, Mark Cavendish also made a strategic choice when he sensed that Kittel or Greipel were starting to flag a little. The previous World Champion, helped by all this Omega Pharma Quick Step team, took advantage of the crosswinds that blew on the route to Saint-Amand-Montrond to leave his rivals behind. The move, immediately taken up by Saxo-Tinkoff, enabled Cavendish to equal André Leducq's 25-stage record and gave rise to a top quality piece of cycling: a mountain stage … but on the flat!

Kittel, from the front to the back
The flat is where the sprinters feel at home, and where the sensation of changeover is also felt. Mark Cavendish certainly continued to make history by adding two lines to his record, but he also suffered the ‘law of the newcomer' on the straights in the form of Marcel Kittel. Sick during the 2012 Tour, the German giant had focused his ambition on the 100th … where he won the first Yellow Jersey, as well as enjoying winning in Bastia. The leader of Argos-Shimano then made his mark at Saint-Malo, at the foot of the ramparts of the city of the Corsairs, in Tours (one of the sprint capitals), and above all in Paris. On the Champs-Elysées, Kittel dominated the disputed (although academic) sprint in which Mark Cavendish, despite being ideally placed, was never in a position to apply the explosive acceleration that has made him almost unbeatable.

Times have changed. With his four highly promising stages, Marcel Kittel is a major player in Germany's victory in the “tableau of stages”. With Greipel's win in Montpellier, and the even more heroic one by Tony Martin in the time trial at Mont-Saint-Michel, the counter now reads six. In the second tier of nations, the Froome-Cavendish combination (even though they do not belong to the same team) has brought five triumphs to the United Kingdom. At the back of the peloton, the French delegation avoided humiliation thanks to the spectacular and prestigious win by Christophe Riblon in Alpe d'Huez. A bit better than the Spaniards, who had not finished the Tour without a trophy for 15 years … but Spain still had four riders in the final top 10 (Rodriguez, Contador, Valverde, Navarro).