‘You Can Make This Beast, But It Needs To Run Flawlessly’

Inside the Jacksonville Jaguars’ Ambitious 8K Video Workflow
Calling the videoboard installation at EverBank Field “ambitious” is like saying Jacksonville, FL, is about to get “a little warm.” True, for sure, but wildly understated. In the videoboard arms race, the Jacksonville Jaguars have hurtled past their NFL competition, and, with a 60-ft.-high by 362-ft.-wide videoboard broadcasting 8K content in each end zone, it’s hard to imagine they’ll be matched any time soon writes Karn Hogan for Sports Video Group.

Getting there, however, took creativity, persistence, and a little bit of luck.

The Jacksonville Jaguars announced their record-breaking project during the 2013 offseason: a $63 million upgrade that called for the largest end-zone videoboards in the NFL, more total video square footage than in any stadium in the league, and a completely revamped video control room to handle it all. 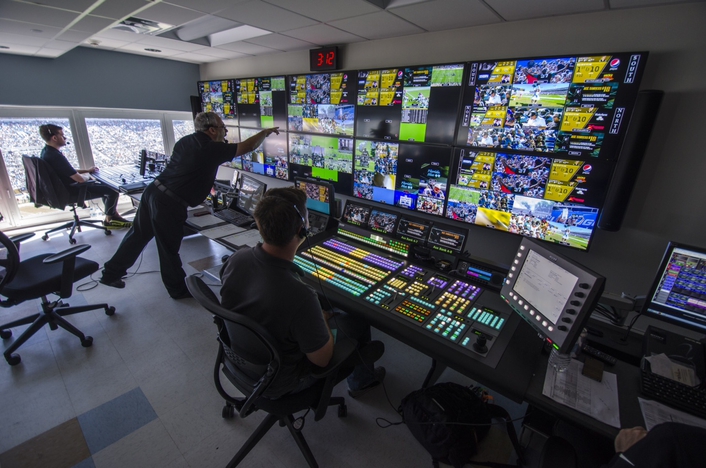 The Jacksonville Jaguars’ new control room houses an elaborate mix of gear from Abekas, Ross Video, Evertz, and other suppliers

The videoboards, manufactured and installed by Daktronics, feature a 13HD-pixel layout and, combined, more than 21,700 sq. ft. of digital canvas. They also presented the first hurdle for the Jaguars’ event operations team.

“The mandate from the senior-executive level in the Jaguar organization was harmony between both boards and a very intuitive show on each,” says Sam Thompson, director/control room engineer, Jacksonville Jaguars. “I’ve got two boards that are 8456×1400 pixels. How do we, number one, create the canvas to paint on, and then how do we manipulate and move forward in a traditional broadcast sense, where I’ve got a 1920×1080 program out?”

Not wanting to scale a 1920×1080 program feed across each board, the team looked at stitching four program feeds together to create a 7680×1080 canvas. The Jaguars reached out to Abekas and selected two 8K Mira production servers — one to power each board — which can record and play back Ultra HD and 8K video and clips. 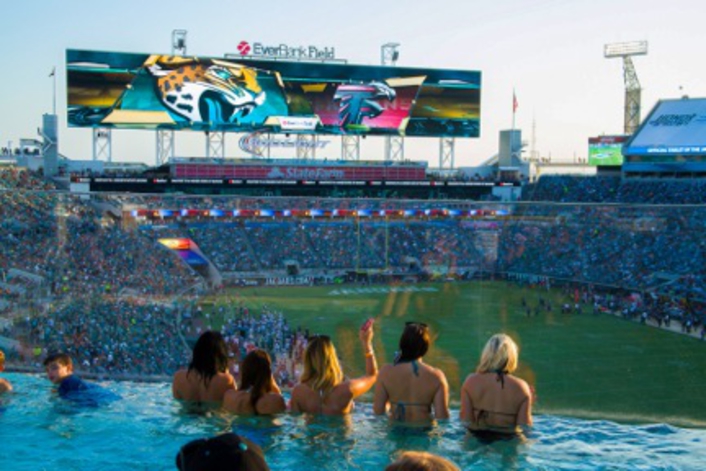 The Jaguars also installed seven Christie Spyder X20-1608 image processors and, to tie the workflow together, turned to Ross Video to stitch the 8K video together upstream of the processors, using the Multi-Screen feature set of the Carbonite production switcher to create a 7680×1080 output. Two Vision Tritium panels and an 8M/E Octane chassis control the Carbonite frames, Spyders, and Mira 8K playback systems. Four M/Es support the south left corner, south right corner, north left corner, and north right corner of both boards, with a fifth M/E providing the program feed to the center of each board.

After switching from a loss codec to a lossless one to eliminate frame interpolation and visible seams, the team was able to seamlessly play out 8K content captured from 4K cameras compositing in 8K.

The next step was ensuring that the workflow was sustainable.

“There’s a lot going on under the hood,” says Thompson. “Once we got past making it work, the next challenge that we faced was, OK, how do we make this work consistently? How do we take a very complicated show and make it simple so that we can execute it? You can design this very complicated [system], and you can make this beast, but it needs to run flawlessly for every game.”

To handle such a complex production system, the Jaguars hired two technical directors: one to manage the middle zone of each board on M/E 5 (program feed), the other to handle the remaining videoboard real estate (wings). The Jaguars again turned to Ross Video to design and build a custom control panel using the supplier’s DashBoard control software to manage the statistical and social-media data populating the “wing” portions of the screen. 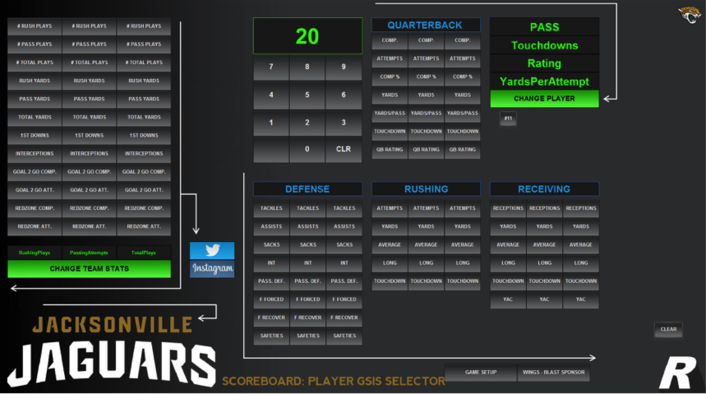 Ross Video designed a custom control panel for the Jaguars to manage stats, social media, and other information

For replay, the Jaguars opted for three eight-channel Abekas Mira instant-replay servers, giving the team a total of 18 channels of record and six channels of playout, as well as an eight-channel Mira production server.

To manage fiber connectivity to edit stations and the massive file size of 8K video content, the Jaguars invested in an EditShare platform.

For a game, 13 manned cameras are deployed: eight hard cameras, three handhelds on the field level, and two wireless Steadicams. Also, robotic cameras are installed on each field post, at the top of each videoboard, on the south studio set, and on the north DJ deck. In addition, the team takes 10 camera feeds from the network broadcasting the game. 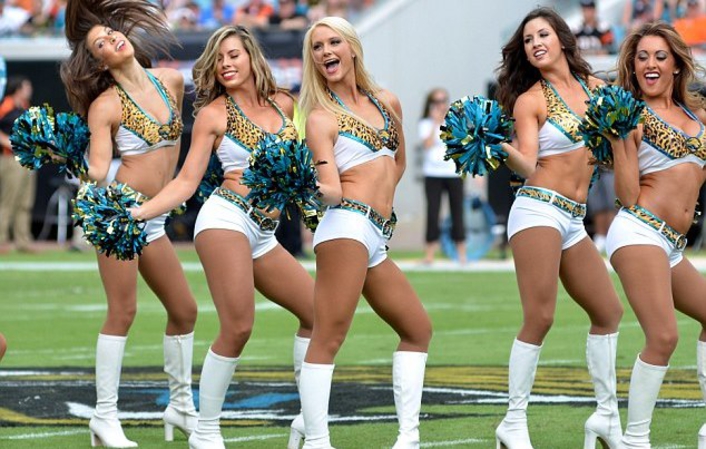 The video-control room was up and running to start the 2014 season; however, learning the nuances of the system took a few games. According to Thompson, the team found its groove midway through last season and is spending the offseason refining its programming and streamlining the workflow.

“We’ve started from zero, taking what we learned in the way we programmed [the system] towards the back half of last season and reapplying and starting from scratch for the 2015 season to become more efficient,” says Thompson. “At the end of the day, [we need to be] efficient and effective to execute any one of the hundreds of different types of execution we need to do on a game day. We learned a lot, and we’re going to apply that [for the upcoming season].”

From 31st to first
In 2013, when the Jaguars’ gargantuan videoboards were just an idea, the NFL released the findings from its “Voice of the Fan” survey, which ranks each team — one to 32 — in several categories, including fan engagement and entertainment. In that category, Jacksonville ranked 31st. 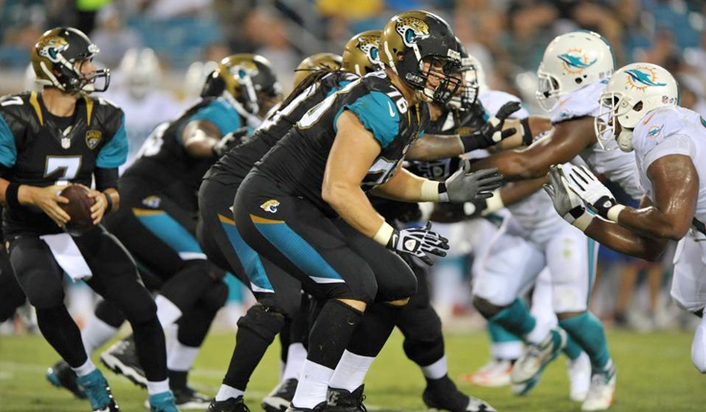 For the 2014 season, after the upgrades were unveiled, the survey results told a far different story.