Choreographed and directed by Craig Revel Horwood (who doesn’t forgo his foreboding judging duties during the tour) and under the auspicious ownership of BBC Worldwide, with their expected high production values, the Live Tour is a co-production of Stage Entertainment UK and Phil McIntyre Entertainment. The show’s I-Mag and special video effects are scripted by Vision Director Tony Grech and is Live Mixed by XL’s Richard Ellis, who was supported by a further ten members of the eleven strong XL Video team, including six of the most seasoned and experienced camera operators who lent a large hand to this year’s lead projectionist, and this year’s crew chief, Ed Moore.

Video has become an integral element of the Strictly Live presentation, which sees seven celebrity dance couples battle it out nightly for supremacy on the dance-floor. It is a vital technical discipline that helps ensure that all the intimacy and drama, thrills and spills of the TV show are replicated in this dynamic, much larger-scale, but still glamorous environment, which is so important for the always enthusiastic and dedicated audience.

Two rear surface side screens housed within scenic set frames were each served by a pair of XL Video’s Barco FLM HD20K projectors. All the VT stings, bumpers and opening credits were shown on these, with the material stored on two Grass Valley Turbo-2 hard drives.

For this year’s show opening XL deployed an additional pair of Panasonic 10K projectors, positioned on the dance-floor at the opposite end to the stage. Pre-recorded dancing silhouettes were projected onto a large kabuki silk. The recorded silhouettes matched live dancers who were revealed at the drop of the kabuki. 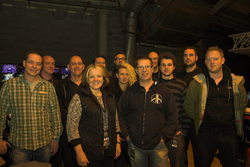 Six long lens Sony Cameras (a mixture of 86mmx and 70mmx) were positioned around the edges of the dance-floor, a further, wide-angle hand-held camera was used at both the “meet the dancers” and at the “reverse corner” of the dance-floor giving another interesting angle for the I-mag screens. A floor mounted and overhead truss mounted pair of Sony robo-cams gave the audience a birds-eye view of the symmetry of some of the dance routines, whilst also adding excitement to the dance couple elimination section of the show.

Video mixing was carried out on a Grass Valley Kayak mixer, part of the high spec portable production system supplied by XL Video and engineered by the semi-legendary Jeroen “myway” Marain, whose beautiful TX pictures were lovingly sent to the audience screens, comfort monitors and VIP areas alike.

The project is again managed for XL Video by Malcolm Mellows, Director of the Company’s specialist Theatre, & Arts, Dance and Performance department.

Mellows comments, “We are absolutely delighted and honoured to be serving this, the fifth Strictly Come Dancing Live Tour. The production has really grown into a slick and spectacular “great night out” for all who come to see it. Apart from the essential live and recorded I-Mag, the video has always played a special role as part of the eye-catching top of the show opening numbers. I want to thank all of the XL touring crew for their hard work. In spite of there being quite a few of them, everyone always has something to be doing on this busy production.”