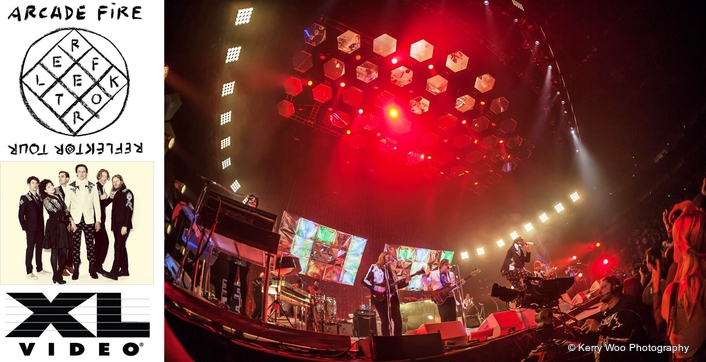 The band are well known for their penchant for the experimental, the off-beat and for embracing creative challenges. Stembridge worked on the last tour, “The Suburbs” in 2011 as Video Designer and has now taken on the role of show designer with great enthusiasm.

XL Video’s Project Manager Phil Mercer comments, “It’s fantastic that Richie has stepped up to Show Designer. The show is real proof of his imagination, vision, talent and ability to think differently. As always we are really enjoying working with him, and it’s great to see show video encouraging a real engagement with the audience, rather than just blasting out generic looks and images”.

With up to 12 people onstage at times, one of the briefs from the Canadian indie rock / art  band was that the performance area was clean and sharp, and the visuals reflected the dancier and more carnivalesque direction of the album. The ‘reflektor’ theme was prominent from the start and evolved from the initial low profile warm-up shows in the latter half of 2013.

Stembridge wanted an expedient but versatile lighting rig for the tour, and started thinking about how his set and video surfaces could be developed to also reflect light in the process becoming secondary lightsources. That all the video surfaces should be truly multi-purpose and look interesting and relevant even when no footage is playing is one of his trademarks, together with using the medium subtly, intelligently and judiciously throughout the set. Less is more!

He started investigating the possibilities of using a mirrored video screen at the back of the stage that would reflect light when not in use, and then jump to life as a screen when video was running.

During the warm-ups he hit on the solution for this, which was to cover XL’s Pixled F-11 LED tiles which they are using on tour - with mirrored Mylar polyester film material. It’s a simple idea that works fabulously! 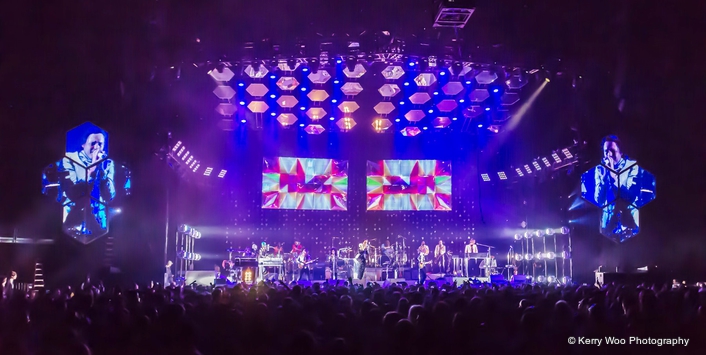 A total of 120 x F-11 LED tiles are used to create two rectangular screens with mirrored fascias, and these are flown in an out throughout the show via a Kinesys automation system. They can go all the way out to the roof so they are completely invisible.

A total of nine Barco HDF W26K projectors are on the tour, three of which beam on to an impressive 60 foot wide by 30 foot tall video back-wall made from Frazzle, a metallic sheen fabric etched by half circle slits that track across the entire surface from Rose Brand. This is behind the mirrored screens, and both takes light and projects it beautifully.

The other six Barcos are used to feed the IMAG screens – which are also integral to the overall stage aesthetics. Their intricate hexagonal lines are based on the Arcade Fire logo and made up from four individual interlinked mini-hexagons ... resembling a honeycomb!

This involves the side screens as part of the bigger design picture forming a harmonious bond with the stage, and – as you would expect - he wanted something completely different from conventional rectangular IMAG screens!

Mapping each side as four individual hexagonal zones enables the creation of different and more exciting pictures and the possibility of using it as one large surface area, four separate ones or any other combination thereof, hence the need for three projectors per side.

The show’s playback content is run from four Catalyst v4 media servers which are triggered from a Road Hog Full Boar console operated by Stembridge at FOH. He runs the Hog very much as a live console with multiple layers of video at his fingertips on the faders, all of which helps mould the organic visual picture as the set unfolds. 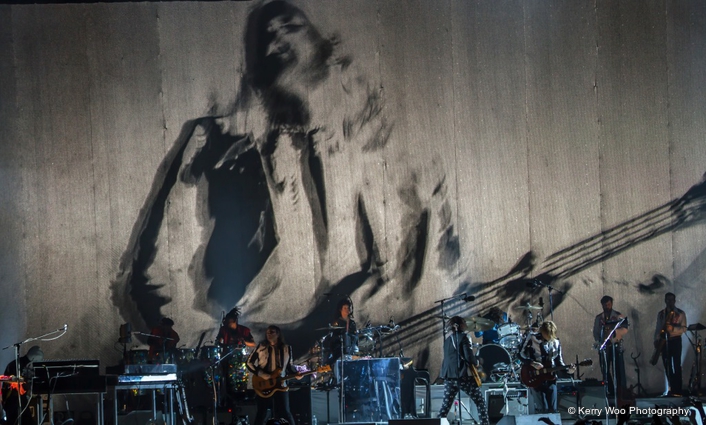 Alongside him on the riser is Chris Bushell, whom he asked on-board as Lighting Designer. The two have collaborated closely on evolving both elements of the show, together with Video Director Charles Woods who is directing the camera mix.

The operated cameras are positioned two at FOH with long lenses, two in the pit on track-and-dolly and also pneumatic pedestals, specified to provide the dynamic range of movement that Stembridge wanted.

With so many people onstage, there is an entire upstage riser with musicians, and he wanted the cameras to be able to get high enough to get good clear shots of these areas.

The final operated camera is a hand-held onstage, and the two robo cams are clamped to the upstage riser to cover the percussion and keyboard areas.

He does a full live cut for the IMAG screens and also sends four auxiliary camera feeds to Stembridge’s Catalysts, so the latter can make use of these to do his own camera cut to the onstage screens. 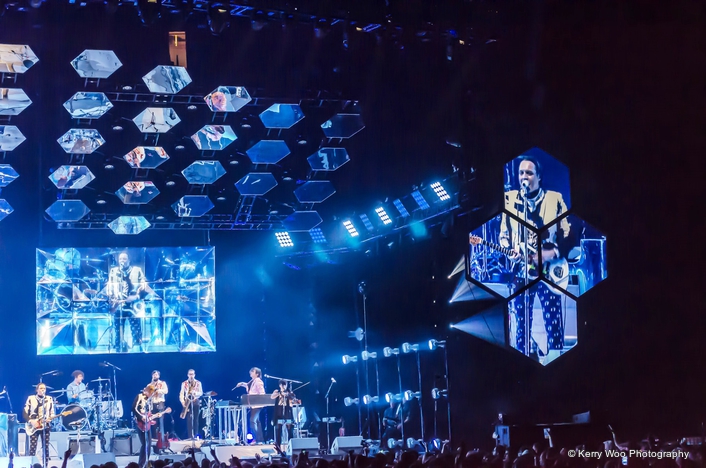 At the FOH position, a hydraulic lift forms the B-Stage, and Stembridge can utilize the pit cameras on their pedestals to capture the action on that while Woods’ IMAG mix continues uninterrupted to the side screens.

The playback content is a classic fluid Stembridge mix of abstracted and slightly obtuse materials, designed in particular to work well when woven in with live cameras – basically the complete antithesis of a music video!

Some of the content he made himself, some he commissioned out to various video artists he knows and one song’s worth was produced by Moment Factory from Montreal. Approximately 35% of the show features playback content.

The tour started in February in the US and Latin America and now comes to Europe where Arcade Fire play a mix of their own shows and festival headliners including Glastonbury. In August, they return to the US. 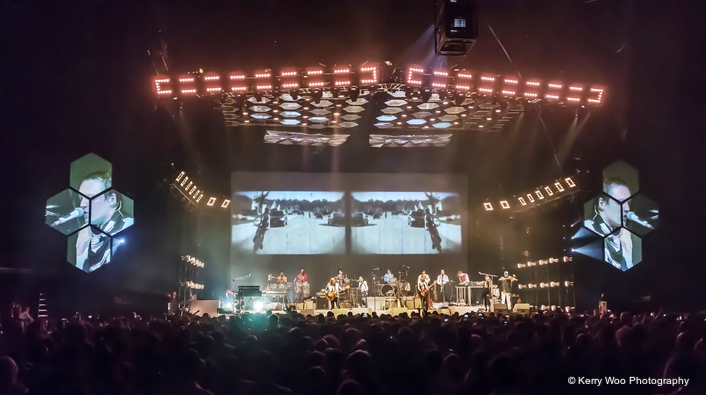 XL Video Is Over The Moon with James Blunt
XL Video Celebrates The �...y’ with The Stranglers
XL Video Sees Tomorrow With Bombay Bicycle Club