XL Video Gets The Elbow at Jodrell Bank

.
XL Video supplied production company Ear To The Ground and the band Elbow with LED screens, PPU / cameras, a Catalyst media server system and crew for a sold out performance at the hugely atmospheric Jodrell Bank Observatory & Centre for Astrophysics near Manchester. 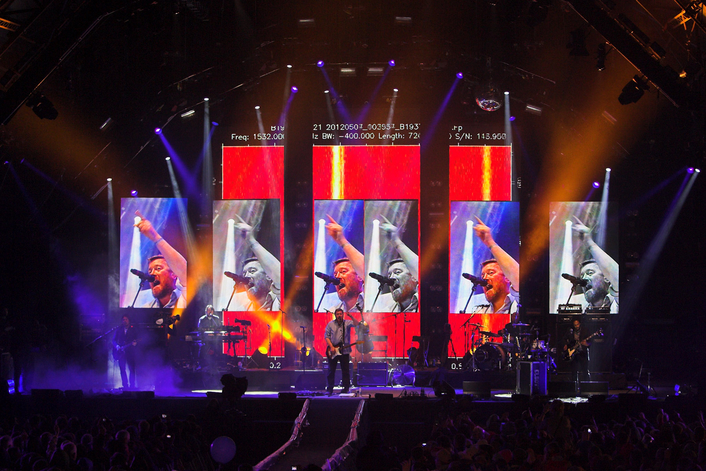 Of the 11 camera sources, three were operated, one stationed at FOH with a long lens, one in the pit and a hand-held onstage. These were joined by 8 remote cameras - two robo-cams and 6 mini cams dotted around the stage.

All these fed into Shripmton’s Kayak. Six were then fed back into Elbow’s touring Catalyst system, where the material was shaped, masked and formatted correctly before being output to all the screens.

The IMAG mix is a delicate Shrimptonesque blend that makes the cameras appear in an idiosyncratic style - very much the award-winning director’s oeuvre. To create a unique live visual look and feel for Elbow, he works closely with lighting designer Cate Carter.

Shrimpton is always keen to compliment his camera operators, who for this show were Rod Williams (FOH), Ruary MacPhie (pit) and Danny Sheldon (onstage).

Wolfgang Schram was the XL engineer for the Jodrell Bank event, and the LED techs were Chalky White and Iain Rendall.

Just before the band took to the stage, the screens were also used for a presentation by Dr Tim O’Brien, Reader in Astrophysics from the Jodrell Bank Centre for Astrophysics, who was instrumental in starting the Observatory’s live music events programme.

He explained the history and significance of the Lovell Radio Telescope – the third largest such steerable device in the world - and the day-to-day relevance of science in all our lives, and also satellite-linked live to Chile during his chat.

Shrimpton comments, “It was an amazing experience doing a show at Jodrell Bank and I was very honoured to have the chance of working with Tim O’Brien. As always, the kit from XL was in great condition, the crew were fabulous and Paul Wood ensured that all our requirements were looked after.”

On the day, everything was affected by relentless rain. It turned the site into a mudbath, presenting numerous practical challenges, but not in the slightest dampening the enthusiasm of the audience or the determination of the band and all involved to deliver a fantastic show with huge production values in an awesome setting! 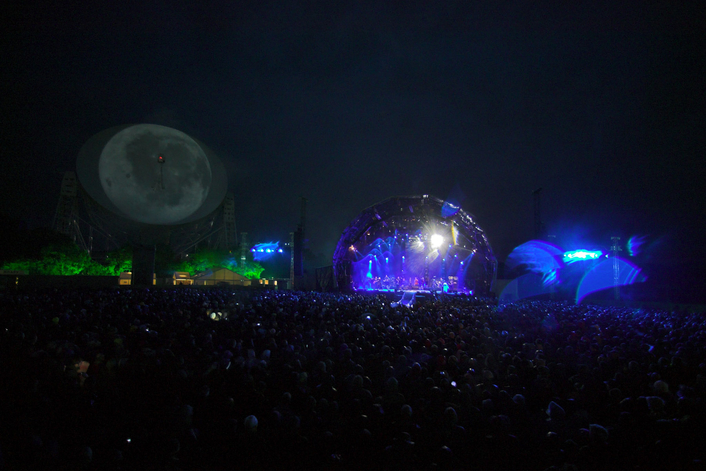