XL Video at The BRIT Awards 2014 with MasterCard

.
The BRIT Awards 2014 with MasterCard - hailed as one of the liveliest and most compelling to date for content, production and visual presentation - featured a fresh and epic look at London’s O2 Arena with an eye-catching stage set designed by Peter Bingemann and XL Video once again supplying LED screens, projection and crew.

The accompanying cameras, PPU, control systems and a Twitter feed-to-screen/moderation system were supplied and managed by Ogle Hog’s Chris Saunders who continued his 20 year relationship with The BRITs.

It’s the twelfth consecutive year that XL - and Production Manager Paul Wood - has been involved as the video contractor for the high profile annual Music Awards, once again working with Papilo Productions, who manage the project for BRIT Awards Productions. 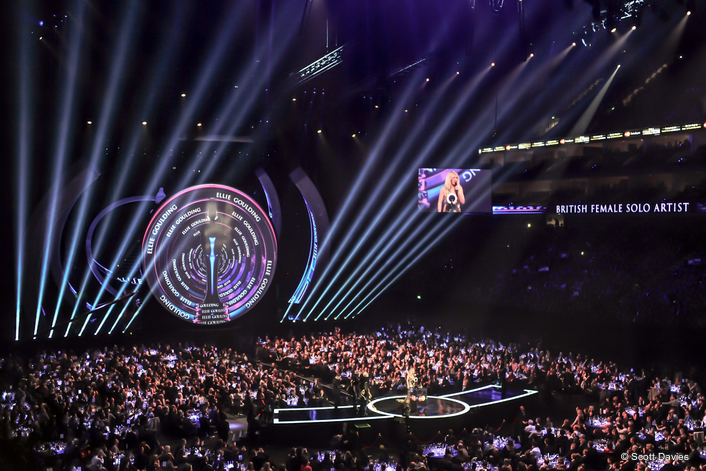 The show was presented by James Corden, broadcast live on ITV and streamed live on the internet for the first time, complete with some show-stopping live performances from Bastille, Rudimental, Beyoncé, The Arctic Monkeys, Katy Perry, Disclosure, Pharrell Williams and Ellie Goulding amongst others. 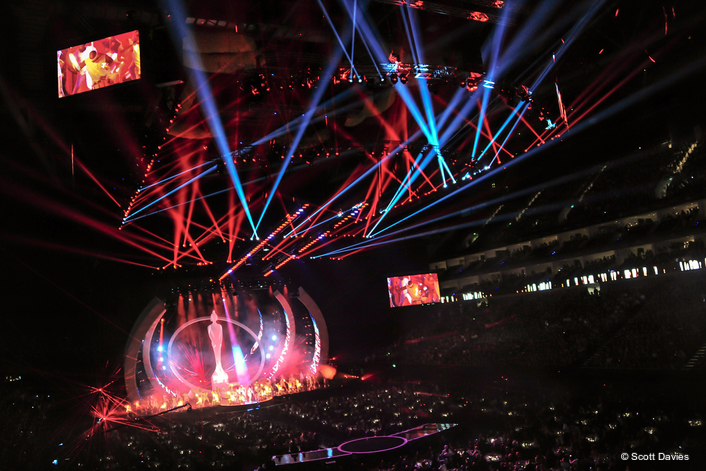 An 11 metre circular close-down projection screen was flown in (downstage on the main stage) whilst Awards were being presented on a central B stage, and this was fed by  three Barco HDQ 2K40 projectors positioned at FOH.

Custom video content for the whole show was created by Hello Charlie and played back by an impressive array of eight Catalyst media servers controlled via two Whole Hog Full Boar 4 consoles, operated by Nick Malbon. 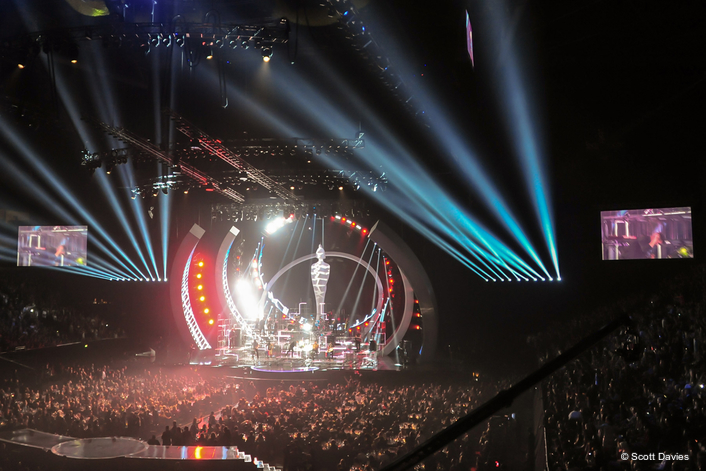 The camera PPU took in six feeds from the CTV Broadcast truck along with multiple EVS feeds, all vision mixed by Ruary MacPhie.

The Twitter feed-to-screen facilitated the receipt of over 1.3 million tweets during the show, from which the most relevant were moderated and displayed onscreen during the commercial breaks.

To ensure that everyone in the vast O2 venue had a good view of the onstage action, XL supplied six IMAG ‘relay’ projection screens. Left and right of the stage were two 26’ by 15’ surfaces using two Barco HD-20 Projectors, and four further 16’ by 9’ screens were rigged around the arena and fed by four Barco R12s.

XL also supplied a number of extras for some of the live acts including:

Katy Perry: 50 x VersaTubes – 12 each in half, one and two metre lengths – were rigged on a frame in a pyramid shape upstage of the scenic statue to enhance her Egyptian themed performance of hit ‘Dark Horse’.

Beyoncé: An 8 metre high x 6m wide gauze was flown in downstage directly in front of the star and a live camera image of her face was front projected onto it using two Barco HDQ 2K40 projectors, whilst she was silhouetted by some lighting trickery from LD Dave Davey. The gauze screen was lifted halfway through her performance to reveal Beyoncé for real as she performed ‘XO’. She was standing in front of three 16’ high multi-layered gauze boxes, and each of these was illuminated with separate content from three rear-projecting Barco HDQ-2K40 projectors.

Arctic Monkeys had their performance at this year’s BRITS enhanced with 8 square metres of Absen 6mm LED tiles cladding the drum riser.