XL Helps Put On The Style for Robbie Williams 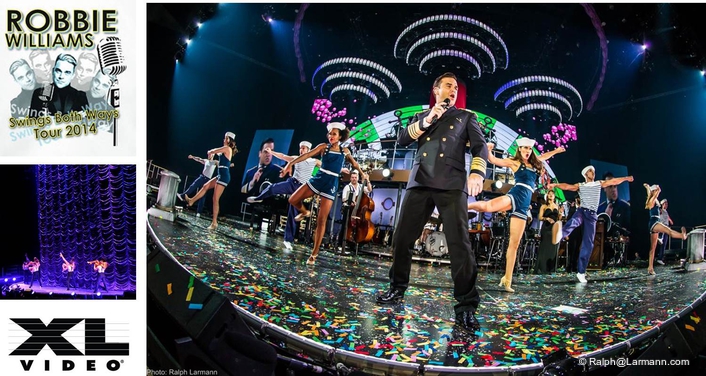 The tour was Production Managed by Steve Iredale and continued through June and July in Europe
XL Video renewed its long and productive working relationship with Robbie Williams, supplying a custom video solution and crew to his current and massively popular ‘Swings Both Ways’ tour.

XL's Project Manager was Phil Mercer with Nilkanth Patel overseeing the technical aspects and, for the first time on a Robbie Williams tour, Jon Shrimpton was live Camera Director.

Once again the stage set and visuals took on a completely new and different dimension from anything seen live before and the aesthetic was - as always – carefully crafted by Show Producers Lee Lodge and Willie Williams, both also involved in commissioning the video playback content, mostly created by Shop Studios in Bristol. 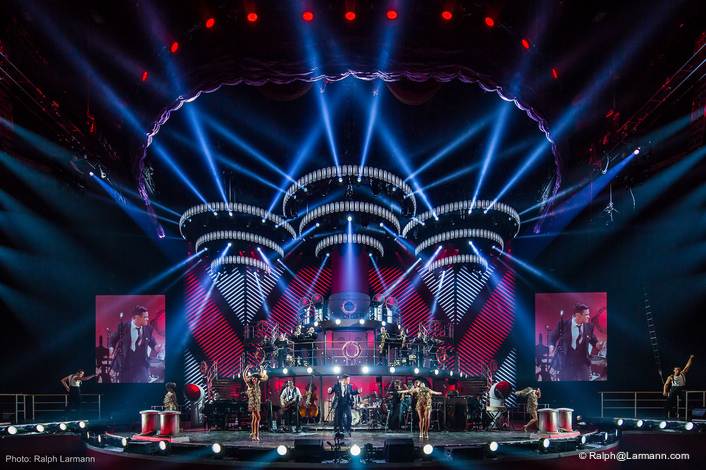 A large part of the look and feel of the show was established by the time Shrimpton joined the team, including an impressive 22.8 metre wide by 10.8 metre high upstage scenic LED wall made up from XL’s Pixled F-12 product. They had also decided on portrait orientated side screens for IMAG which are made up from Radiant MC-7T. Both LED types were housed in XL’s custom touring frames.

Three Barco 40K HD projectors were used to beam material onto a massive purple Austrian drape. This wrapped around the stage and flew in and out on a Kinesys automation system at various stages of the show to mask off different areas of the performance space. Judiciously used, it created dramatic scene changes, adding depth and dynamics and had the ability to completely transform the environment.

The projectors were flown at FOH and projected when the drape was fully in with Robbie Williams performing on the ‘passerelle’ catwalk at the front of the stage.

Content for the upstage wall was programmed and run via a Catalyst media server. The projection was fed via a d3 media server system, chosen for its specialist warping and highly flexible mapping facilities needed to deal with the eccentricities of the cloth surface. Both servers were operated by Phil Haynes via a Hog 4 console.

Shrimpton had nine cameras at his disposal - five operated Sony HXC-100s and four Bradley CamBall2s, all from XL Video. The Bradley is a piece of kit Jon is particularly fond of - he even describes them as his 'pets' – after using them on recent Depeche Mode and Sigur Rós tours.

Three of the five Sony’s were stationed around the edges of the passerelle, two in fixed positions and one hand-held and roving at the end of the runway to capture the full Robbie live interactive experience  - for which the artist is renowned. The other two were at FOH fitted with long-throw lenses. 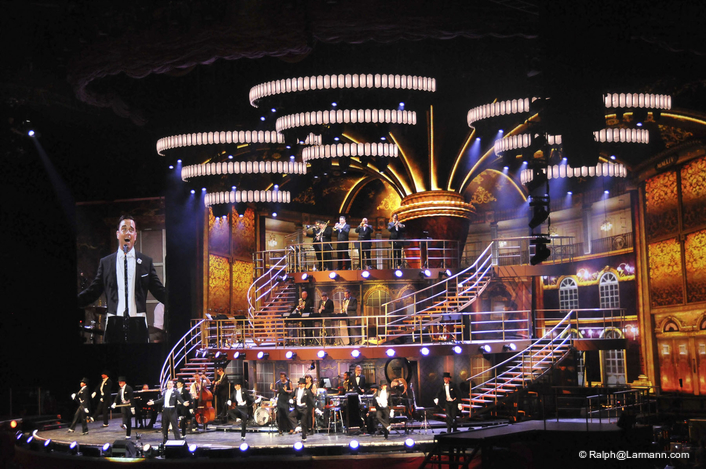 The Bradleys were right above the drum kit, with one downstage centre and two near the stage left and stage right keyboard positions. Three of these were operated by Shrimpton and the centre one by XL crew member Joe Makein using a separate dedicated Bradley controller.

At the hub of the PPU was one of XL’s new Grass Valley Karrera mixer / switchers.

Mix wise, it was an extremely clean show with the focus right on Robbie, which is what all his fans want, and as such a bit of a departure from Shrimpton's more idiosyncratic and off-beat oeuvre of direction – howevere … one that he thoroughly enjoyed!

He gave the artist space onstage and presented big, bold, lingering beauty shots without over cutting - simple and effective.

Only two spot effects were applied via the console, both at very specific points. A simulated Hollywood Mist filter diffusion effect was used to soften a still frame, keyed over a mocked-up glamour magazine cover called ‘How Do’, and the only other element of visual trickery was a split screen in one number.

Shrimpton comments, "It was a very grown-up tour with some serious talent and very experienced and well respected product industry names on-board which is great. Working with XL has, as always, been a great experience - nothing has been too much, all the kit is in great condition and the crew are just fabulous! What more can I ask for?" 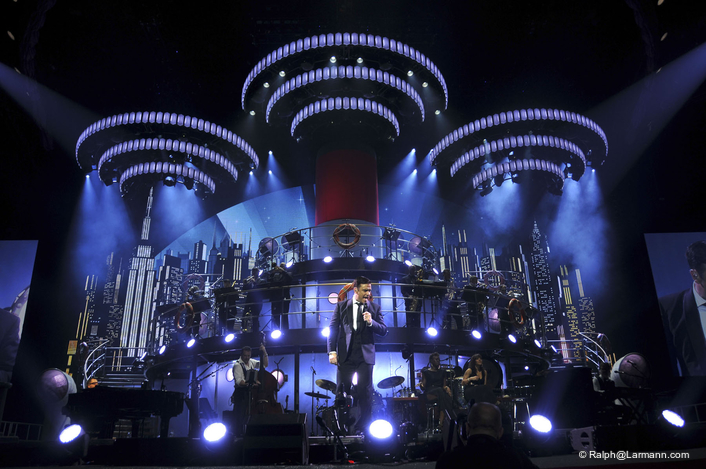 He worked alongside seven crew from XL : in addition to Joe Makein (who is also an LED Tech) and Phil Haynes who are mentioned above, were Oliver Derynck (Engineer); Al Wright (Cameras / LED Screen); Gabriella Linford (Cameras / Projection) and Rob Wick (Head of Cameras); all Crew Chiefed by the unflappable Gary Beirne.

The tour was Production Managed by Steve Iredale and continued through June and July in Europe. It is scheduled to visit Australia in September.