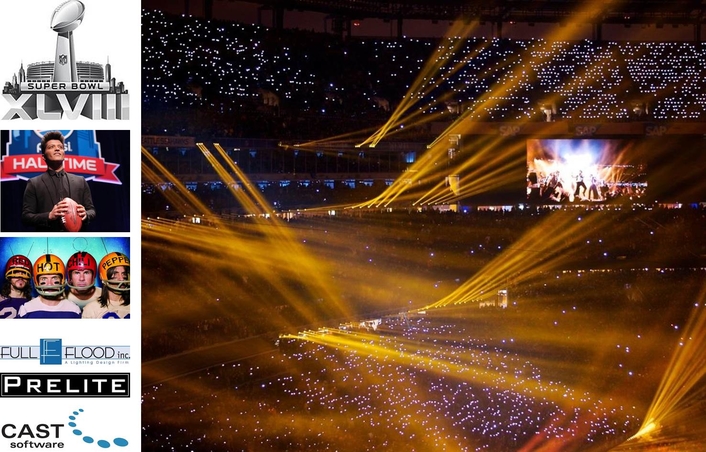 Millions of viewers worldwide had their eyes on MetLife Stadium in New Jersey on Sunday, 2 February watching as the NFL’s Denver Broncos and the Seattle Seahawks battled it out for the title of Super Bowl XLVIII champion. While the game itself left Denver fans a bit bored, the halftime show proved to be the most exciting part of the day. Super Bowl XLVIII was the most watched television program in U.S. history with 111.5 million viewers while the halftime performance was the most watched in the history of the Super Bowl drawing in a record 115.3 million viewers, passing the record 114 million who watched Madonna perform two years earlier.

The Super Bowl Halftime Show has some of the most stringent requirements in the business. Setup occurs in front of a packed stadium and in this case nearly freezing conditions – all in just under a mere 8 minutes. With this sort of timeline, pre-production is not a luxury – it’s a necessity. A tight load-in and no retakes means the plan must be flawless so pre-production means pre-visualization. No surprise that wysiwyg has been the tool of choice for the last 5 years.

wysiwyg R32 was used to bring the halftime show to life long before the whistle blew. Thompson and Lighting Director Pete Radice did pre-programming at PRG in early January. Once the project team was on site in New Jersey, while they continued programming on the previz system throughout the week prior to the show, most of the time they were able to use the real rig.

Radice explains, “We continued on wysiwyg while in New Jersey. We set up the system as soon as it rolled off the truck and continued on. By the time we got to the stadium we had most of the cue structure in place, but didn't have a time code track yet. Once we got that, I was able to work on that through our previz system, while the guys were doing the real work in the cold and snow. I also continued using the previz system after we were fully setup, so the crew could wring out the system without me bothering them while I took care of cue notes via previz.

“Tom was great with handling changes for us. He even gave me control of the stage lifts so I could see the Color Blocks mounted on their faces, and of the PAR-46 trees so they could be seen at the appropriate time in the show. I would say the whole wysiwyg setup was well worth it. We arrived at the stadium with a patched system, focus positions built, and a cue structure in place. Not too long ago, that process wouldn't have begun until we arrived at the stadium.” 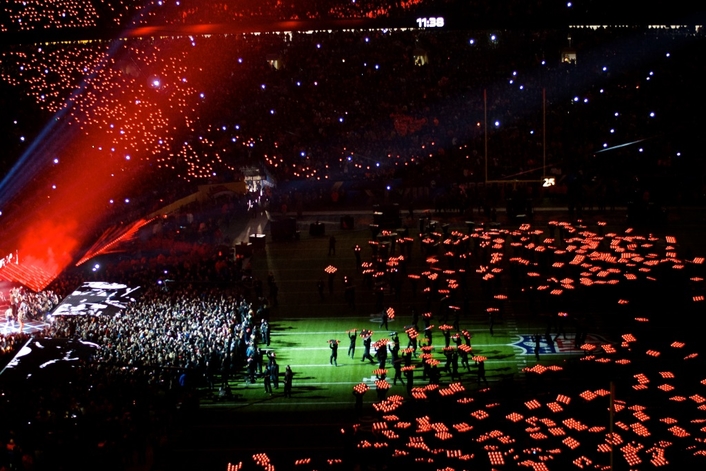 The lights creating the audience backdrop behind the stage were set on 4 levels – field level plus 3 levels on the audience balcony rails. Clay Paky Sharpys were located in both the balcony levels as well as in back of the LED panels behind the performers on stage. 220 Magic Panels were located on stage left and right in tight clusters with 12 Clay Paky B-Eye fixtures located on both sides next to the stage. PRG 4000 Spot fixtures were placed in the stadium catwalk upstage and downstage. Lighting was controlled by a PRG 676. The Magic Panels were fed video content by video director Jason Rudolph while the pan and tilt was done by Radice. The information was merged in custom PRG boxes and viewed in wysiwyg.

The 80,000 PixMob hats in the audience were used to show video effects using people as individual pixels. While PixMob used their own simulator for the video, Rudolph ran that content through wysiwyg while controlling video on a grandMA to cue with the lights.

Barnhart said, “Working with Prelite and wysiwyg was a great situation. The Magic Panels especially took an amazing amount of channels plus all the screens running through the MA. wysiwyg took on around 160 universes. Working with Prelite helped us foresee problems prior to arriving on site, which otherwise could have been very expensive. Once the previz was moved to New Jersey, we could work with Tom over the internet if we moved any lights, so that was convenient. In addition, we got held up 2 days late from getting our hands on the rig due to weather, so the New Jersey Prelite studio really came in handy!”

Thompson said, “CAST was very helpful making sure we had current fixture files such as the Clay Paky B-EYE. They even provided a new executable file that extends to cover 200 universes. Prior to R321, wysiwyg was good for 100 universes, but in this day with Magic Panels fitting three to a universe, the 100-universe version gets eaten up rather quickly with a system like this. We asked CAST for more, citing fixtures that require over 100 channels each, and they responded quickly, giving us a new version two days later. Excellent service from CAST!”

Peter Debreceni, Manager of Libraries at CAST explained about the addition of the B-EYE to the wysiwyg Library: “The B-Eye has a rotating lens effect that is completely new for us and we are working on how to simulate it for R33. The Super Bowl used a very preliminary version that simulates the basic effects only. We occasionally get requests from Users that need a new or unusual object in the wysiwyg Library and we do our best to create what they need as quickly as possible. In fact, the B-EYE is so new that there aren’t very many in circulation but ACT Lighting graciously sent us one to test here at the office.

“The rotation effect creates 37 separate facets each spiraling around the beam so I had to painstakingly map them out. The trick for us is getting all of that independent movement down onto a single beam, having it work efficiently but also looking great. Look for this in R33 – coming soon!”

The halftime show raises the bar each year so judging by the spectacular results this year, we can expect to see astounding things in 2015 – hopefully with the game as well. Or as Barnhart joked, “The game wasn’t good, but better for Bruno Mars, since that’s what everyone is talking about!”

Since 1994, the CAST Software has delivered software solutions to and for the entertainment production industry and special events and meeting industry. Based in Toronto Canada, we deliver to the world! CAST Software Ltd. proud maker of Emmy award-winning wysiwyg which is indubitably the industry standard in lighting design and previsualization software that revolutionized the entertainment production industry by automating planning, designing and producing film, TV, stage, specials, road shows and large special events.  CAST’s wysiwyg design suite provides the single point of design and previsualization for motion, lighting and media controllers. wysiwyg has been used with great success on big name entertainment like DJ Tiesto, U2, Harry Potter, Super Bowl halftime shows, the Queen’s Diamond Jubilee, the Olympics Opening and Closing Ceremonies, and the Commonwealth Games to name but a few of the most recent projects, as well as special events including the annual Nobel Prize Banquet, major product launches and celebrations.