Outlook 2014 Main Stage
The Outlook Festival is staged over four days in the beautiful and slightly desolate environs of Fort Punta Christo just outside Pula, the main city on Croatia’s bustling Istrian coastline, known for its mild climate, smooth sea and unspoiled nature.

Outlook – this was the seventh edition - features the largest collection of dub step, bass music and Soundsystem Culture in Europe with an action-packed line up uniting some of the biggest names from these vibrant dance genres.

Overall project, production and site management for Outlook 2014 – and the four day underground electronic beats Dimensions Festival on the same site the previous weekend – was undertaken by Bristol UK based WNY, headed by Ben Price, with lighting design and rigging site wide by Fineline Lighting, also from Bristol. They were working for the event organisers, NVS Promotions.

Each year the production values increase and become more demanding in line with the success of the event itself. This year, the 15,000 capacity Outlook saw over 400 international acts perform. Ben Price, as overall Production Director, was responsible for the site design and technical realisation which saw a 1.5 x 1.5 Kilometre area on the Punta Christa peninsula divided into three main zones.

The main Harbour Stage was nestled into one of the Adriatic’s many scenic sea-side coves and could accommodate audiences of up to around 7000. The second stage was located in The Clearing, mid way across site which was accessed by a network of dirt tracks. (For the  smaller capacity Dimensions Festival, The Clearing had been the main stage)

On the opposite side of the site to the Harbour was The Beach area, complete with the Beach Party stage directly on the waterfront which fired up every afternoon and ran until the main two stages and the Fort, with its seven live areas, kicked off at 8 p.m. each night. Farther along the waterfront from this was the camp site.

The late 19th century fort, Pula’s first line of defence during the days of the Austro-Hungarian Empire, presented an eclectic collection of seven ‘pop-up’ performance spaces all ensconced in and around the charismatic ruins of the extensive fort. These ranged from the 75 capacity Ballroom to the 1500 capacity Void Stage. 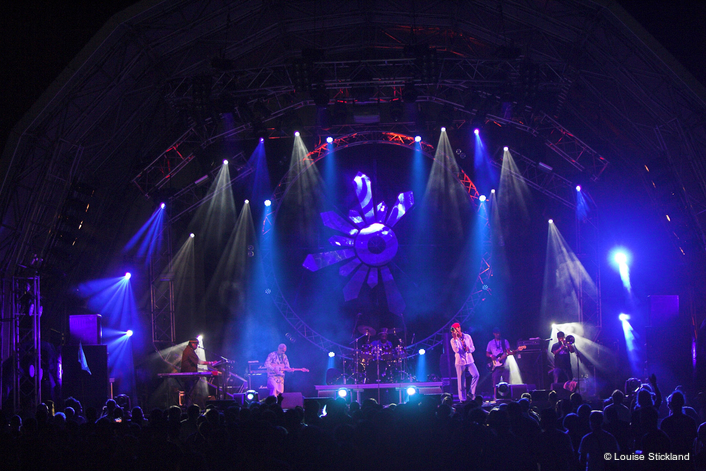 Ben Price’s team included Lead Production Manager Stuart Witcombe plus three highly experienced ‘Zone’ Production Managers, each of whom co-ordinated their own zones on the site, which was challenging to work on from many angles including the rocky terrain and the limited transport links between the areas.

Tommy McMillan was Harbour Area Production Manager, Jamie Wiseman co-ordinated the Beach Party, Campsite and the Clearing Stage, and Fineline’s own Rob Sangwell was engaged by WNY to leverage his experience by coordinating the production needs of The Fort.

Each Production Manager worked alongside a local site crew supplied by WNY’s Croatian partner Pozitivan Ritam, who brought invaluable local knowledge, insight and a whole range of skills and talents to the equation. “They were absolutely essential to the mix and the smooth running of all the production elements,” states Price.

Other suppliers brought in by WNY included RG Jones from the UK, who provided the audio requirements for all performance stages; Swiss staging company Nüssli, who built all the main structures; The Power Company from Austria who provided site-wide power and Croatian plant specialist Magrad who were the source for portacabins, trackway, fencing tele-handlers, safety lighting and other related infrastructure.

The site build started in mid-August. Price and crew - which peaked at 120 people - ran the site to the same CDM standards as they would any event in the UK, with a few local interpretations to take specifics into account.

The most galvanising aspects of working at Fort Punta Christo were the unforgiving and difficult to negotiate topography and its own micro-climate. During the build and changeover, crews had to contend with 120 Km-an-hour winds, sudden and violent electrical storms and driving rains … as well as enjoying the late summer sunshine and warmth for which the region is renowned.

It’s also a gruelling project for all site staff and crew, with long and intense working hours, no days off or breaks between the two events and multiple music stages operating simultaneously across a large geographical area.

“Having the right people and contractors on-board with the right attitude is absolutely fundamental, and once that is in place, the different areas will virtually run themselves,” explained Price.

He adds, “Everyone’s commitment, passion and dedication to making Outlook and Dimensions 2014 the best yet has been really amazing”.

Treading A Fineline
It’s the third year that Fineline Lighting has been involved with supplying lighting and rigging for the Festival – and their first supplying all eight major performance stages plus all the Fort’s environmental and architectural components including trees, bushes, landscape and historical features.

Fineline’s MD Rob Sangwell this year took on an additional dual role as Production Manager for The Fort, and the company also supplied all the rigging, trussing and motors required for all areas and created lighting production designs for the eight stages.

Harbour Stage
Fineline asked LD Nic Ayres to design and operate lights on the main Harbour Stage, which included a live mix of reggae, dub and dancehall stars as well as a selection of DJs, so his objective was to create a fabulous, flexible and dynamic visual space, which he approached utilizing curves and spheres.

The roof structure was an 18 metre wide dome from Nüssli with plenty of capacity for flying, so several trusses were sub-hung, including a vertical circular truss with a screen stretched across the middle for projecting video & gobos, flanked by two circular sections either side and another vertically hung curved mid-truss immediately in front.

The front truss – horizontally flown - was also circular, and below this either side of stage were two curved towers, their bases on the deck. All of these structural elements brought  depth to the stage design when viewed from any angle.

The moving lights were nearly all Robe - 12 x Robe Spot 600Es and 12 x Wash 600Es, 12 x Pointe multi-purpose fixtures and 8 x LEDBeam 100s, which were rigged all over the trussing framework, with an additional 8 Sharpies on the deck.

These were joined by 10 x 6-lamp PAR bars, eight Atomic strobes plus a splattering of single LED PARs used to tone the trusses and reveal the architecture, plus 8-lites and 2-lite blinders.

Control was an Avolites Tiger Touch console and Avo dimming, and Ayres ran the stage with his Fineline LX Chief, Rob Watson.

Fineline also provided all rigging and motors to fly the PA arrays. 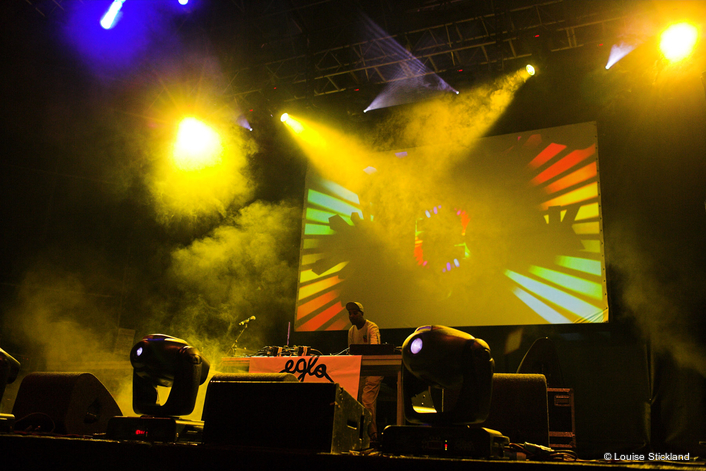 Another eight Robe Pointes were positioned on the floor and an additional package of 9 x  Sharpies was available as a floor package for specific artists.

Control was more Avo dimmers and Will Dale and Adam Morris programmed and ran lights on a ChamSys MQ100 console with a SnakeSys R8 node.

The Fort
The magnificent Fort building carved into the rock covers 10,000 square metres and comprises a rabbit warren of tunnels and underground rooms. Those utilized for the festival only scratch the surface of what is actually there.

The eclectic collection of Outlook spaces all needed completely bespoke lighting solutions involving a good deal of lateral thinking! “The basic brief in terms of ‘lighting ambience’ was to make it look and feel like a series of random parties happening across the fort – organised but with a raw, makeshift and exciting edge, also integrating as much of the Fort as possible, ” explains Sangwell. 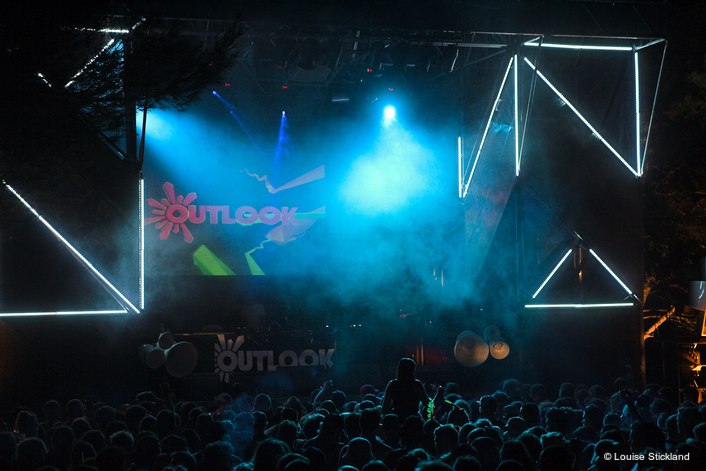 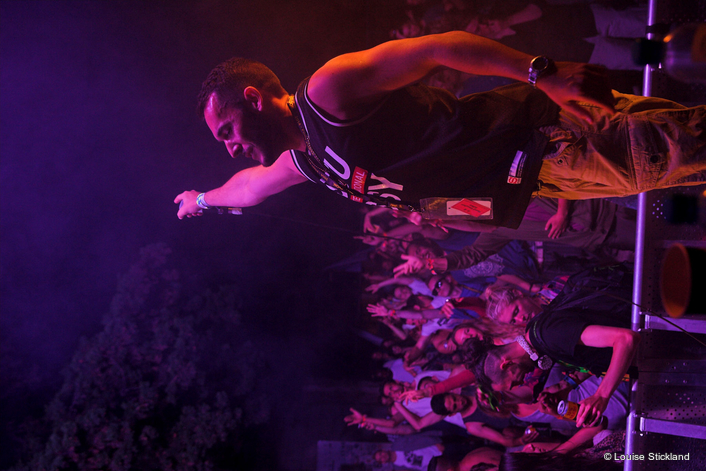 For the Mungo’s Hi Fi Soundsystem area Fineline supplied and erected a small dome stage with a stretched fabric roof which fitted into the space perfectly and neatly without involving too much exposed metalwork, with  Robe 600 Spots, 600LED washes, Atomic Strobes and Pars  hung directly off this structure to keep everything tidy.

The Garden Stage had a small steel stage and DJ set up near the entrance to the Fort which was covered in foliage by the Art Team and illuminated by a selection of Palco LED Floods & PARs. PARs, Profiles & Effects Projectors were rigged in the trees in and around The Garden to add mood to the audience area, and several art works were also lit.

The Moat was another challenging space to light. The stage was at the end of a long narrow  trench with high stone walls once part of the Fort’s original deep moat. The organisers didn’t want to see any trussing or metalwork over the moat, so long throw lights were used including 8 x Robe Pointes, four mounted on a scaffolding structure above the stage and four actually onstage, firing down the moat and into the audience. 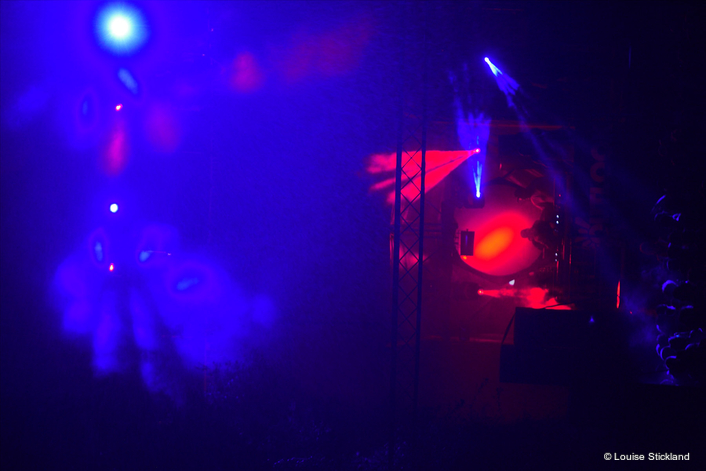 Arena 1 featured another stretched roof and a simple truss tower structure above the DJ booth, complete with PARs and low-level lighting. In here, Fineline worked closely with projection specialists Lumen Artist from Budapest, who created a series of stunning hand painted slides that were projected all down both sides of the arena. New slides were created for each night of the festival, providing a softer and eye-catching dynamic. 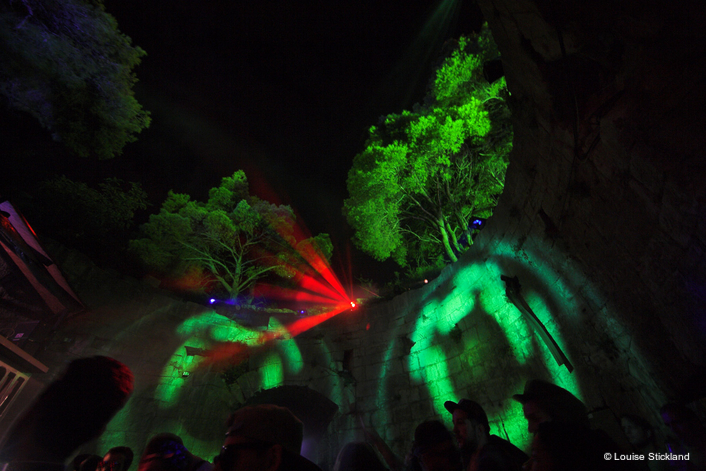 The tiny Ballroom was located in a funky cylindrical space built out of rocks, with high walls, no roof and a series of trees and the skies above which also became part of the aesthetics. The lighting brought an old skool  free party feel, with vintage fixtures to match including High End Trackspots, Martin Destroyers, Optikinetics Solar 250s and other classics. Some of these were rigged on a convenient shelf in the rock-face at the top of the walls. The trees above were suitably lit to complete the visual horizon.

Environmental Lighting
A substantial part of Fineline’s equipment package was devoted to this task and spread over a large area.

A combination of imagination and common sense informed their approach to lighting the architecture and natural flora and fauna of the Fort and included in this detail was illuminating all the main signage and various art works installed by the organisers.

It was a long-winded task due to the physical distances that lights had to be deployed and cables had to be run, but one that brought fantastic results, adding plenty of ambience and magic to the scene. 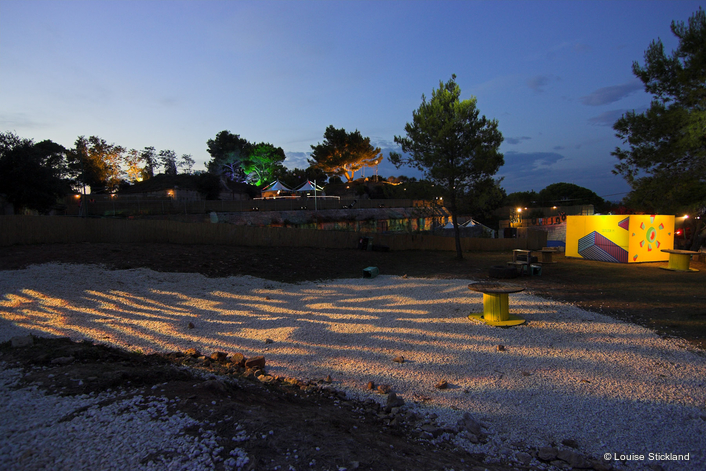 Sangwell explains that they made as much use as possible of theatrical techniques like shadowing and silhouetting against the Fort’s stone elements, and generally lit strategic hedges, bushes and trees to make the whole Dimensions / Outlook Fort experience more immersive and have a special aura.

Over half a truck’s worth of space was taken up with the architectural lighting which was mostly PARs and Source Fours, the entire range of MBI floods, plus an assortment of flicker wheels, gobo rotators and other theatrical animation effects, including a load of colour-changing LED fixtures and two Studio Due Dominators to crown the summit of the Fort.

Sangwell comments, “We all really enjoyed working on Outlook again with WNY. It is extremely hard work, but with great people in all the production departments, some fantastic teamwork and a truly special location, I think this production is a real achievement and something we can all be extremely proud of”.