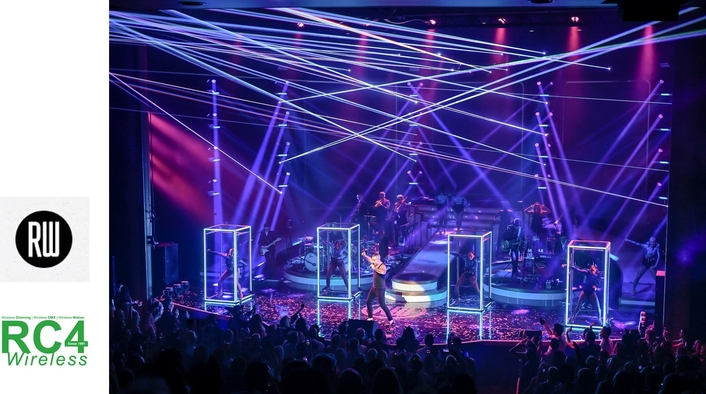 In Europe, Robbie Williams is a legend; he regularly fills stadiums and his productions are some of the most anticipated on the continent. One of his dreams was to do a Vegas show, and to make every detail of Williams’ show perfect, Production and Lighting Designer Sean Burke, principal at Holes in the Dark, needed reliable wireless DMX technology. “When the wireless stuff came up, I did a bit of research on it, looked around, and saw that Baz [Halpin, of Silent House Productions] used RC4 Wireless products on the last Katy Perry tour. I know the crew chief, and he said they didn’t have any problems with it,” confides Burke. That was enough for him to entrust RC4 Wireless with the job for Williams’ “Live in Las Vegas” show. Matt Bakken, the Master Electrician on the show, adds: “When a lot of people in the touring industry use wireless, they use equipment from RC4; to me, if your wireless is working in a stadium with 25,000 plus people with cell phones, that’s good enough for me.”

For the Williams’ production, the team built their system around an RC4Magic Series 3 DMXio-HG Transceiver with External Antenna; working along with the DMXio are six RC4Magic Series 3 DMX4dim 4-Channel Wireless Dimmers. “Addressing was easy and very straight forward; pairing the receivers with the transceivers was simple as well. The system was exactly what I wanted and it just worked,” reports Bakken.

“After working in the professional theatre world for a few years, I founded RC4 in 1991,” says James David Smith, also the Chief Product Developer. “Our DMX4dim wireless dimmers are the pinnacle of design, and can control LEDs, halogen lamps, position servo motors, ring telephones, and more.  The RC4 ColorMatch feature lets you color-correct LEDs from different manufacturers to deliver the same color palette across all props and scenery.”

It’s no secret that Las Vegas is a busy wireless environment. “We have several wireless systems running concurrently; at no point did I see any signal degradation or interference,” says Bakken. Placement of the transceiver is also important. “I try to mitigate any potential issues by putting the transceiver right down by the proscenium on the stage, so there would be no problems. And there weren’t,” Bakken adds.

The ability to punch through crowded wireless areas is a fundamental part of all RC4 Wireless products. “The entire RC4Magic Series 3 system, starting with the DMXio-HG transceiver, uses proprietary wireless technology unlike any other,” explains Smith. “It consumes just 1/15th of the 2.4GHz radio band and punches through the noise like nothing else.”

There are many in the industry that are cautious of wireless dimming and DMX. “I know a lot of people who are incredibly wary of wireless because they have been burned in the past. When you’re using it, your wireless must work,” states Bakken. The RC4 products on Williams’ show proved their worth night after night. Bakken says: “RC4 gear works well and that’s all I can ask for. If you haven’t used it, you should give it a shot.”

Robbie Williams concluded his stint in Vegas on July 6th; however, the U.K. press reports that he’s close to inking a six figure residency deal.

RC4 Wireless provides wireless DMX 512 dimmers, receivers, and transceivers for use in theatre, concerts, venues and more. The firm won the PLASA London 2014 and 2015 Awards for Innovation; LDI 2014 and 2015 New Product Honorable Mentions and a 2017 PLSN Gold Star Product Award.