Each suit contains approximately 30 meters of LEC using a RC4Wireless W-DIM for W-DMX 4-channel wireless dimmer
W-DMX™ by Wireless Solution Sweden was part of a show-stopping performance during the recent Melodifestivalen 2012 as part of Danny Saucedo’s crowd favorite, “Amazing”. Melodifestivalen is the annual Swedish song contest that determines Sweden's song to be internationally represented in the Eurovision Song Contest. This year’s Melodifestivalen began February 4 and the Finals were held at the Globe Arena in Stockholm on March 10.

Danny originally competed as a finalist in Idol 2006 - the Swedish version of Idol where he got to the top 6. During Melodifestivalen, he first competed in Malmö, where he was immediately qualified straight to the finals and considered one of the favorites to win. One of the reasons his performance got such positive feedback was due to the custom suits of light worn by himself and his five backup performers.

Henrik Lundin, Lighting Designer at Satellite Live was in charge of the “light suit” concept and realization, using innovative LEC technology in combination with W-DMX from Wireless Solution Sweden.

Each suit contains approximately 30 meters of LEC using a RC4Wireless W-DIM for W-DMX 4-channel wireless dimmer, and a Newtech scroller. The 2-piece suit runs off 8 AA batteries and plugs together with the pants holding drivers to convert the 4 channels – 1 channel each for red and blue and 2 channels for white, enabling a split in the body to enable chases. The LEC light is white so the tube itself is colored for the red and blue.

Lundin controlled the lighting on the suits from a dedicated grandMA2 Light console located at the side of the stage and communicating with the suits via a W-DMX transmitter. Over 200 cues were pre-programmed via timecode. “The W-DMX signal was strong enough even in the crowded air space to control the suits when the performers sat in the Green Room, located in the middle of the arena approximately 60 metres away,” explains Lundin.

LEC, manufactured by Sweden-based ThinLight stands for Light Emitting Capacitor, a principle that produces luminescent light of electrical energy. When one adds electricity (volts) to a thin layer of luminescent zinc sulfide, it produces light. The typical lamp consists of a glowing phosphorlayer between two conductive electrodes, much like a paste and allowing for flexibility.

Lundin said of the W-DMX, “It was important that I was able to use the 5.8GHz bandwidth which comes standard with W-DMX considering the amount of cameras and other wireless equipment fighting for air space in the arena. I had absolutely no interruptions and the performances were flawless.” 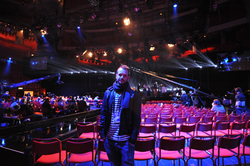 Danny ended up taking a close second place but the suits won rave reviews from both fans and critics. Watch Danny’s performance on YouTube

Wireless Solution Sweden is the world’s leading manufacturer of Wireless lighting control equipment, now celebrating 100,000 units sold worldwide and over 35 OEM partners. Hailed for its reliability and ease of use, Wireless Solution’s W-DMX range of products is the consistent choice for top professionals in the lighting industry and specified with perfect results in high-profile events and installations around the world. W-DMX is also hailed as the best wireless OEM solution. W-DMX has been used for lighting major events including the Youth Olympics in Singapore; Season of Light in Helsinki; Olympics in Vancouver; Times Square in New York City; the Nobel Prize Banquet; the Berlin Wall 20-year Anniversary; Eurovision Song Contest; and many more.