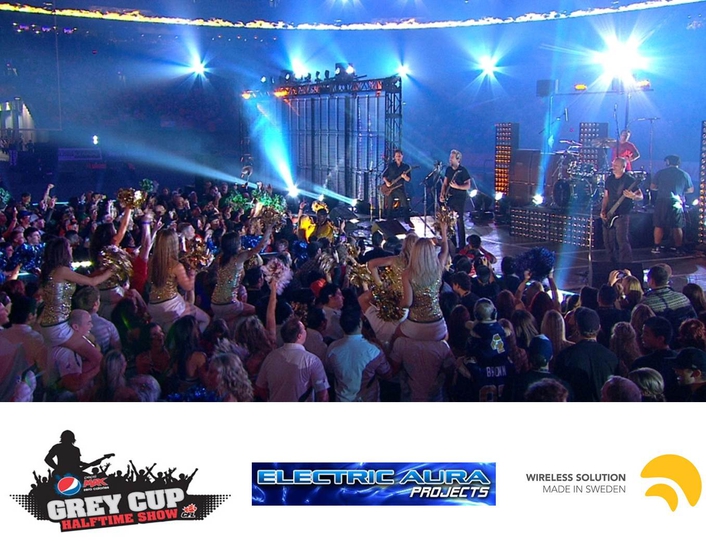 W-DMX™ by Wireless Solution was one of the players at the 99th Grey Cup, the prestigious Canadian football game between the East Division champion Winnipeg Blue Bombers and the West Division champion BC Lions to decide the champion of the Canadian Football League in the 2011 season. The game was held on Sunday, November 27 at BC Place Stadium in Vancouver in front of a live audience of 54,313.

The Pepsi Max Halftime Show was performed by the Vancouver-based rock band Nickleback, playing songs off their albums All The Right Reasons, Dark Horse, and Here and Now. The halftime show was produced by Patrick Roberge of Patrick Roberge Productions, alongside Production Designer Robert Sondergaard and TV Lighting Director Jason McKinnon of Electric Aura. System Engineer was Jason Bolger and Production Electricians were Charles Arrata, Corey Proulx, and Ken Reckahn.

The stage for Nickleback was erected center field with the stage set made up of Jarags stacked like blocks, flanked by video screens on both sides. A catwalk extended from the stage out into the audience. Lighting consisted of over 150 Martin MAC moving lights. 4 W-DMX Tranceivers sent a flawless wireless signal from 4 grandMA Light consoles, 2 grandMA NSPs and 2 Vixen Media Servers, programmed by Shaun Forbes.

Jason Bolger explains, “The W-DMX was used to send a DMX signal from 2 separate universes into the upper levels of BC Place Stadium where there was no convenient path to run cable. There was no question that the system would work flawlessly given the stability we have come to expect from the W-DMX transceivers.  Using the Uglybox to measure signal strength throughout the setup, we never saw a level below 98%. This was an excellent way to easily integrate fixtures in the upper levels of a very large stadium into the show.”

The game was watched on television by approximately 4.6 million people. In the Vancouver market, over half the population watched the game and, overall, more than 11 million Canadians watched some or all of the broadcast on TSN and RDS. In the end, the Lions defeated the Blue Bombers, 34–23, and became the first team in CFL history to win the Grey Cup after starting the season with five straight losses. Both the game and the halftime show were deemed a huge success.

About Wireless Solution
Wireless Solution Sweden is the world’s leading manufacturer of Wireless lighting control equipment, now celebrating 100,000 units sold worldwide and over 35 OEM partners. Hailed for its reliability and ease of use, Wireless Solution’s W-DMX range of products is the consistent choice for top professionals in the lighting industry and specified with perfect results in high-profile events and installations around the world. W-DMX is also hailed as the best wireless OEM solution. W-DMX has been used for lighting major events including the Youth Olympics in Singapore; Season of Light in Helsinki; 2010 Olympics in Vancouver; Times Square in New York City; the Nobel Prize Banquet; the Berlin Wall 20-year Anniversary; Eurovision Song Contest; and many more.