The live graphics for all three live shows of the ESC 2011 (semi finales 1 + 2 and the finale) were realized with Vizrt systems
On behalf of the NDR Vizrt in co-operation with Molden Media has supervised and implemented the real-time graphics for the Eurovision Song Contest (ESC) 2011. The design templates for the ESC graphics were created by Wieder Design (Munich) and Turqoise Branding (London).

The implementation of the graphics was carried out with Vizrt’s  Viz Artist software. In order to “fill” the graphics with actual data a Content Management System was necessary. For this purpose, the software Viz Content Pilot was used. Because the input masks/templates of Viz Content Pilot had to be “filled” dynamically, a corresponding programming of the templates had to take place. The programming of these templates was carried out by Molden Media. Digame was responsible for the collection of the voting data and forwarded these data continuously to Vizrt/Molden Media.

In order to read the data stream from Digame and  to store it onto a database, Molden Media developed a dedicated application to connect Vizrt to the Digame interface. For the final voting additional rules, supplied by the EBU had to be implemented in the rundown to sort the ranking of the finalists in case countries had achieved equal points during the voting. All transmission relevant data was stored in a database and read out directly into the templates. Therefore during the show no incoming data had to be edited by hand. With this system the live graphics for all three live shows of the ESC 2011 (semi finale 1, semi finale 2 and the finale) were realized.

For the live transmissions seven Viz Engines/Viz Artists were assigned for the automated playout of the graphics and four Viz Content Pilot/Viz Trio systems were used manually by operators. In addition two redundant Viz graphic hubs and Oracle database servers had been set up. All servers were installed and controlled in the central equipment room of NDR and routed via a Gundermann&Drunk KVM system to four different playout desks. One of these playout desks was located in the NDR HD OBVan Ü1 for back-up services. The other three playout desks have been in permanent operation to carry out various tasks during the live broadcast. 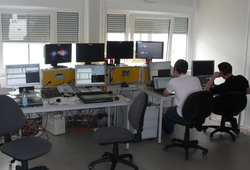 These three playout desks were allocated to serve the voting graphics, the insert graphics and the highlight graphics. The voting graphics workstation was located directly at the EBU desk in the Esprit arena. In addition to Vizrt, Molden Media and Digame staff also the EBU Supervisor Jon Ola Sand was present during the shows. The insert graphics workstation was implemented in the BR HD OBVan FÜ1 and operated by Vizrt and the BR/NDR HD OBVan team.

The graphics workstation for the highlights was located in a dedicated office container for Vizrt and Molden Media. From here it supported the EVS server systems in the HD OBVans and was used to include graphics in the song recaps and the highlight edits. In addition the entire system and signal monitoring of the Vizrt installation was carried out here.

On the Six graphic systems at the automated playout desks two channels were available which were configured as preview and redundant back-up, thus six channels were permanent live, while the graphics machine number seven was without back-up channel, because it only was used to playout the final voting onto the giant LED wall. It was not used for on air live graphics.

25 different graphic types were used in the live broadcast and not one required entry mask required the manual input of data. By means of appropriate programming of the database and the entry masks all the on air graphics was loaded automatically, however the system was flexible enough to allow changes of the graphics even during live operation if required.