twofour54 Partners with FGB Arena for Film and TV Productions

Desert Force MMA is the first production to benefit from the partnership - The show will be broadcast live on MBC Action
twofour54, the commercial arm of the Media Zone Authority – Abu Dhabi, has entered into a partnership with First Gulf Bank Arena (FGBA) to promote and utilise the venue for TV and film projects in the Emirate.

FGBA is the latest addition to twofour54 intaj’s growing list of production locations and will be the venue for the MBC Action’s Desert Force mixed martial arts (MMA) championship being held in Abu Dhabi for the first time on August 25.  As part of the agreement, twofour54 intaj will provide full production services for the venue including the use of nine HD cameras, mobile studio equipment, post production facilities and crew on an on-going basis.

Jamal Al Awadhi, Head of Commercial, twofour54 intaj, said: “twofour54 is proud to assist in growing the Abu Dhabi film and TV sector and by partnering with FGBA, there are tremendous opportunities for production companies and support services to benefit from having this venue as a filming location.  For this event, our team along with MBC’s production team will work closely to manage all aspects of the production including lighting, audio and filming; ensuring all the excitement of Desert Force is captured in the best high definition quality.

The FGBA 6,000 seat multipurpose indoor stadium is the size of three basketball courts and is located at Zayed Sports City, Abu Dhabi. The arena, which officially opened its doors to the public in February 2014, has since managed to host several successful events such as the Ragheb Alama concert, The Abu Dhabi World Professional Jiu-Jitsu Championship, and Fatima Bint Mubarak’s First International Basketball tournament.

FGB Arena’s General Manager Rainer Schueler, “We are extremely delighted with our partnership with twofour54 intaj. Working closely with them as our new strategic TV and production partner we will benefit from their extensive regional and international experience and will provide us with the opportunity to utilise our venue for major TV and film productions in Abu Dhabi. 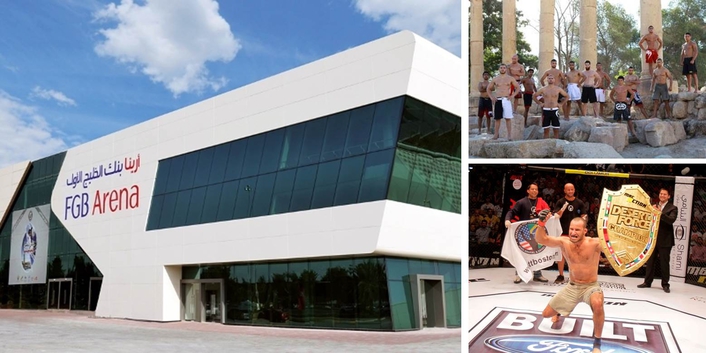 The MBC Action’s Desert Force MMA Championship is the first Middle Eastern Platform for aspiring MMA athletes to face-off against regional and international fighters for the title of Middle East Desert Force Champion. Previously held in other Arab cities, such as Amman, Jordan, and Manama, Bahrain, the event aims to promote Arab mixed martial artists by providing them with the opportunity to showcase their skills on a weekly TV series aired on MBC Action.

twofour54 intaj has attracted regional and international productions to Abu Dhabi, including the Hollywood blockbuster franchises ‘Fast and Furious 7’, Star Wars Episode VII, the paranormal thriller ‘Deliver us from Evil’ and the Syrian series ‘Hammam Shami’.  In addition global television series “Top Gear UK” and the “Bold and the Beautiful” have also benefited from the services of twofour54 intaj.

The most recent accolade for twofour54 intaj was being named Digital Studio magazine’s ‘Studio of the Year’ in 2014 having previously won the same award in 2010. It has also won Digital Studio’s ‘Post Production House’ award in 2011 and 2012, and received the Broadcast Pro ‘MENA Special Recognition Award’ as well as the Editor’s Choice award for ‘Best Live Production of the Year’ for its coverage of the Gulf Cup of Nations in Bahrain in 2013.

About twofour54
twofour54, the commercial arm of the Media Zone Authority-Abu Dhabi, is a leading media and entertainment hub in the Middle East and North Africa (MENA) region, aiming to nurture the development of creative industries in the region through supporting talent, content development, and young entrepreneurs.

As part of its mission to help Arabs realise their ambitions across diverse media platforms, twofour54 provides financial support, a creativity lab that engages members in creative projects, as well as training and networking opportunities through tadreeb, and world-class production facilities through intaj. All of these services are supported by its end-to-end business services provider, tawasol.

twofour54 powers the Abu Dhabi Film Festival and Abu Dhabi Media Summit annually to drive the development of a vibrant film and entertainment industry. The Abu Dhabi Film Commission (ADFC) is also part of twofour54 and offers international projects incentives such as a 30 per cent cash-back rebate on their first production.