Following on from its success working on series 2 of the show, HotCam is once again delivering Sony F800s, monitors, sound recorders and lighting equipment for the living soap-opera about young people in Essex which returns to ITV2 this week (25 September 2011).

From HotCam’s perspective, the biggest challenge on TOWIE is achieving the show’s ‘filmic’ look in a short timeframe using a small crew and PSC cameras. 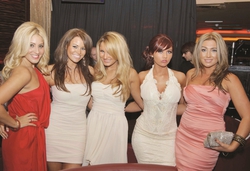 HotCam managing director Trevor Hotz says: “TOWIE requires broadcast-ready, quick-turnaround footage and the use of small, versatile but high quality cameras that can be used in the small flats and houses that the characters live in. To give it a 'filmic' look it is possible to use high-end digital film cameras but they are much less cost-effective when budgets are tight so, instead, they opted for Sony F800s - which provide great images but are also compact and nimble - and then we deploy some clever lighting techniques. It’s one of the most demanding shows we work on but I think the on-screen results are excellent.“

About HotCam
HotCam is a leading broadcast equipment hire company. It provides camera, audio, lighting and crewing services to television producers from its bases in New York and London and around the world. UK credits include “The X Factor” for ITV, “Freddie Flintoff vs The World” for Sky and “Coach Trip” for Channel 4. US credits include “What Not to Wear” for BBC Worldwide Americas, “History Detectives” for PBS and “American Pickers” for The History Channel.