The show was co-hosted by actors Omar Chaparro and Blanca Soto along with actress/singer Lucero. Together they showcased a number of distinguished performances including Carlos Vives (UR2/SM58®), Alejandro Sanz with students from Berklee College of Music (UR2/SM58), Pitbull (UR2/SM58), Marc Anthony (UR2/KSM9HS) and Carlos Santana with Juanes (UR2/KSM9). 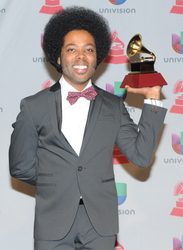 As the night’s biggest winners, Marc Anthony, Carlos Vives and Draco Rosa—who was considered the comeback of the night—took home awards for Recording of the Year (Vivir mi Vida), Song of the Year (Volvi a Nacer) and Record of the Year (Vida). Shure endorsers that won a Latin GRAMMY include artists like Bajofondo (Best Alternative Song and Best Alternative Album), and Alex Cuba (Best Short Music Video). Other artists that made history that evening were Gaby Moreno (Best New Artist) and Beto Cuevas (Best Pop/Rock Album).

Another highlight of the evening was legendary singer Miguel Bosé, who was honored as the Latin Recording Academy’s 2013 Person of the Year, and was armed with a black Shure UR2/BETA®58. “Miguel is a profoundly generous human being. He is convinced and convinces with his ideas,” said Gabriel Abaroa Jr. President/CEO of the Latin Recording Academy, on his introduction remarks. 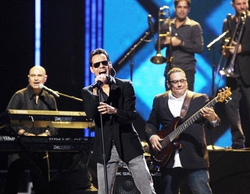 For this tribute performance, multiple artists performed some of the classic hits by Bosé like “Linda” by Gian Marco, Alex Cuba and Santiago Cruz, followed by Ricky Martin who performed “Bambú,” Laura Pausini who made an elegant version of “Te Amaré,” Juanes and Bosé indulged in a duet on “Nada Particular” and Natalia Lafourcade/Illya Kuryaki who sang with a touch of ‘ska’ on “Morena Mía.”

On performances and broadcasts like the Latin GRAMMYs, reliability and quality are the two areas where there can be no compromises. The mixes have to be pristine, and that starts with the microphones. For that reason Shure microphones were selected for the majority of the evening performances obtaining outstanding results. 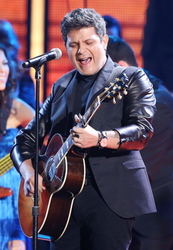 Tom Holmes, Broadcast Production Engineer said, “The Shure RFs were all rock solid for me the whole week. I was impressed in particular with the sound of Natalie LaFourcade's acoustic guitar with your Beta 181 microphone. I know she went through a whole slew of guitars before she found one she liked, but she was happy with that mic from the start.”

Usually the choice of lead vocal mics is left up to the performers as a matter of policy. Past and present ceremonies have included either a Shure KSM9 or a Beta 58A. Other Shure microphones used were the Beta 181 on acoustic guitars and the KSM313’s on horns. Of course, Latin music uses a lot of percussion – another application for Shure was the SM57 on congas and bongos. And for monitoring the leading choice were Shure PSM®1000 in-ear monitors.

This year’s Latin GRAMMY Awards telecast on Univision drew an audience of over 10 million viewers in the U.S., and makes Univision a Top 3 Network for the night. It was the fifth most-watched program on all of broadcast television with more adult viewers than the entire line-ups of the major English stations.

Shure Incorporated is headquartered in Niles, Illinois, in the United States. The Company also has regional sales and marketing headquarters in Eppingen, Germany, and Hong Kong, China, with more than 30 additional manufacturing facilities and regional sales offices throughout the Americas, EMEA, and Asia.

ADLIB is Top Of The Pops With Radio City Live
First Chilfest Event A Massive Success
Grand Opening Show of the...