Toneheads Ltd of Cologne, Germany supplied all audio equipment and technical support for Eurovision
The Eurovision Song Contest recently completed its 57th year, held at The Baku Crystal Hall in Azerbaijan, a brand new multi-purpose indoor arena with a capacity of 23.000 spectators. The Baku Crystal Hall was commissioned by the City of Baku specifically for this event and construction was completed in a mere eight months. A perfect venue to host Eurovision, the show that continues to captivate audiences worldwide and its fans are proof of this.

The event makes news every year with respect to both its technical achievements as well as for its broad and colourful spectrum of musical performances. Lighting and staging is always visible proof of the high level of professionalism, but audio is equally important for the show, having to fill many requirements.

The Eurovision Song Contest format is fairly straightforward. Member countries of the European Broadcasting Union (EBU) can submit an original song to compete in the annual show. Based on the performance, the public audience of the participating countries phone in votes for their favourite act, as long as it’s not their own country. Combined with the scores of professional national juries, a winning country is chosen which has the additional privilege of hosting the contest the following year. Last year, Ell and Nikki of Azerbaijan were crowned winner with their song “Running Scared”, putting the contest in the capital of Baku for the first time.

Baku hosted 42 participating countries spanning three live broadcasts – two Semi-finals on May 22nd and 24th and the Finals on May 26th. The 2012 Finals had a live viewing audience of 23.000 plus an estimated 125 million television and internet viewers worldwide, making it the largest music television program in the world. 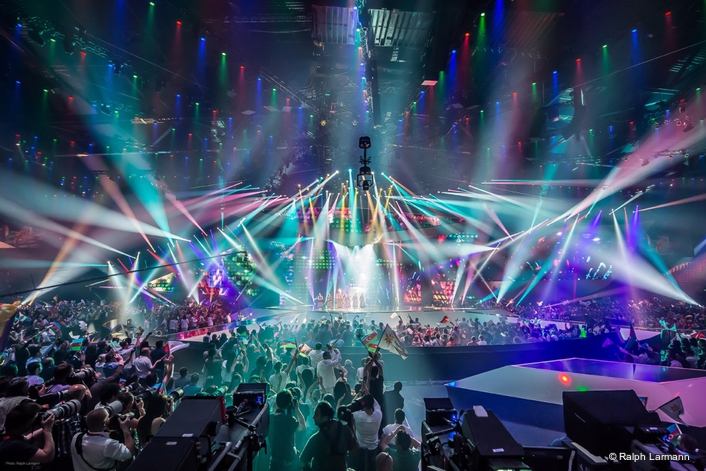 Toneheads Ltd of Cologne, Germany supplied all audio equipment and technical support for Eurovision, under the leadership of Florian Kessler. This is no small task, given that the production is first and foremost a television format but with a large live audience in an arena. Toneheads also supplied all microphones and in-ear transmitters and receivers for all of the performers

The design of the arena sound was fairly straightforward, with a few challenges along the way. The team had to evenly distribute audio to all parts of the arena, with Eurovision being the very first event in the new venue. “We were also dealing with a low trim height – only 16 metres. That posed some design challenges as well,” said Kessler.

Kessler further describes the sound setup, “Due to the low trim height we had to use small PA-Systems because of the viewing axis of the camera systems – especially the flown camera systems. With the L`Acoustics Kiva and Kara Systems we made the right choice and had good discussions about PA Sizes. We split the PA Systems into 3 main circles. The first was built with 8 L`Acoustics Kiva Systems each with 2 Kilo and 8 Kiva flown around the outer stage frame. To get a good coverage at the height of the Crystal Hall we built the second circle with 5 L`Acoustics Kara positions each with 3 SB18 in cardioid mode and 9 Kara-Systems. The third circle consisted of 11 Kara Positions flown around the grandstand. These positions were also 3 SB18 and 9 Kara Systems. Another two positions of Kara were used to cover the greenroom and another two as outfills for the areas around the greenroom. For the conventional monitoring we used 6 L`Acoustics 112XT and two Kiva Arrays (each 2 Kilo and 8 Kiva) flown at the stage.” 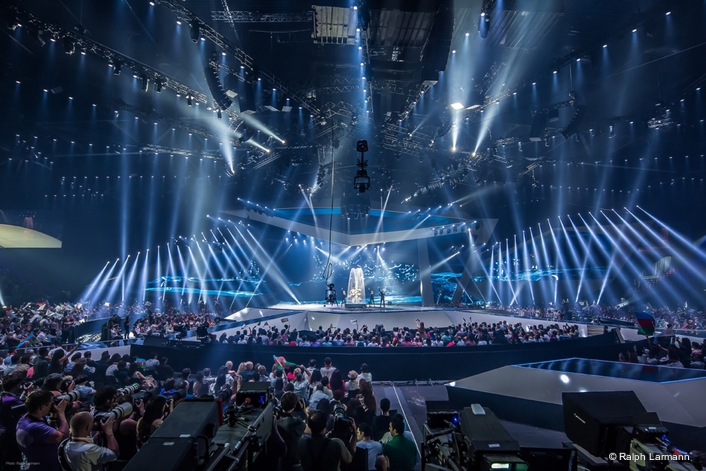 He continues, “In preparation of the sound concept we talked a lot with the Broadcast Sound Engineers to get optimal athmomicrophone – positions. Due to our rigging positions of the first circle they had the chance to get microphone positions behind the PA System. It worked really well. Markus Müller Communication was assigned from Sennheiser to execute the part of the complete wireless microphones and In-Ear monitoring. Three of our wireless-technicians supported the team of Markus Müller.”

“One of our big challenges was the transport of the entire equipment and the preparation of the shipping lists but Schenker did a great Job. Another challenge was the unknown venue. It was the first event in the new Crystal Hall and as we arrived it was still under construction. To design our setups we got construction plans of the Crystal Hall and later some of us did a forward inspection to check technical details and make some pictures to finalize the planning.”

In the end, the sound for all performers was a clear winner, although the final results of the competition put Sweden as 2012 champion with the song “Euphoria” by Loreen.