TABALUGA and the Signs of Time: A Small Dragon on a Very Big Tour

A passion for excellent sound characterised the farewell tour of TABALUGA during autumn 2012
The link between a small green dragon and Sennheiser could be clearly heard during the farewell tour of TABALUGA at over 50 concerts across Germany. For almost 30 years TABALUGA has enthralled fans both young and old; the lovable green dragon has sold around three million albums and more than 1.5 million concert tickets – an incredible success that TABALUGA’s creators (rock singer Peter Maffay, children’s songwriter Rolf Zuckowski, author Gregor Rottschalk and illustrator Helme Heine) barely dared to dream of when they first created him back in 1983.

During autumn and winter 2012, TABALUGA embarked on a huge farewell tour accompanied by some well-known guests. Actor Heinz Hoenig shone as the evil snowman, “Der Graf”, frontman of German band “Unheilig”, portrayed Death with good humour, and former Monrose singer Mandy Capristo was convincing as Lilli, the great love of TABALUGA’s life. During the tour, musical friends such as Jule Neigel, Helene Fischer, Uwe Ochsenknecht and Laith al-Deen took turns in joining the dragon on stage at various venues around the country.

Microphones and IEMs
Part of the exceptionally complex PA system was an extensive Sennheiser microphone set-up. Wired models from the evolution 900 series were used on the drums to create a powerful and dynamic sound; an e 901 transmitted the kick drum perfectly while the toms were all miked with e 908 condenser microphones. The cymbals were picked up from below using e 914 models. The guitar amps were classically kitted out with the Sennheiser e 906.

Sophisticated wireless technology was designed for “TABALUGA and the Signs of Time”: no less than 66 frequencies were used, occupied by 16 hand-held transmitters, 14 bodypack transmitters and 36 IEM beltpacks. In order to cover the runway in front of the stage and the two small stages located in the auditorium, four circularly polarised A 5000-CP antennas were used along with the AC 3200-II transmitter combiner. The system also included four A 2003-UHF passive directional antennas for the EM 2050 receivers. 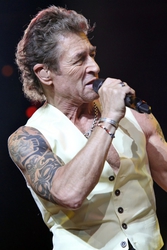 The Sennheiser SKM 2000 wireless microphone was used exclusively and was fitted with e 935 capsules. Some of the most eye-catching pieces of equipment included Peter Maffay’s personalised microphone decorated with tribal motifs and his initials, as well as the white hand-held with painted TABALUGA figure used by Mandy Capristo. EM 2050 dual-channel receivers were placed at the side of the stage near the monitor desk. All instrumentalists and singers were fitted with wireless monitoring systems with bodypacks that were perfectly integrated into the costumes and designed to be as invisible as possible.

The Sennheiser Wireless System Manager software, together with a specially modified EM 3732-II receiver, helped staying on top of things. This receiver normally covers a range of 180 MHz but was modified to cover two complete frequency windows with a switching bandwidth of 360 MHz (470 to 798 MHz). As a result, both the IEM system working in the BW range (12 SR 2050 IEM dual-channel transmitters) and the wireless microphones in the CW range could comfortably be monitored. A total of 12 ew 572 G3 systems connected to ASA 1 antenna splitters were reserved for the guitars. Here, the unallocated gap (823 to 832 MHz) between the domains claimed by LTE was used.

A rock fairy tale with perfect sound
“TABALUGA and the Signs of Time” was a magical, elaborately staged rock fairy tale that enthralled both young and old during the many sold-out farewell concerts. A singing zebra, a merry mayfly, frantic grasshoppers, busy bees and all kinds of other characters were combined into a touching storyline that tugged at the heartstrings of every generation and dealt with the timeless themes of love, loss, mortality and death. Always at the centre of the action was the small green dragon together with Peter Maffay, whose band covered a wide spectrum of musical styles from samba and jazz to rock, hip hop, ska and contemporary pop, playing music that had the audience up on their feet over and over again. 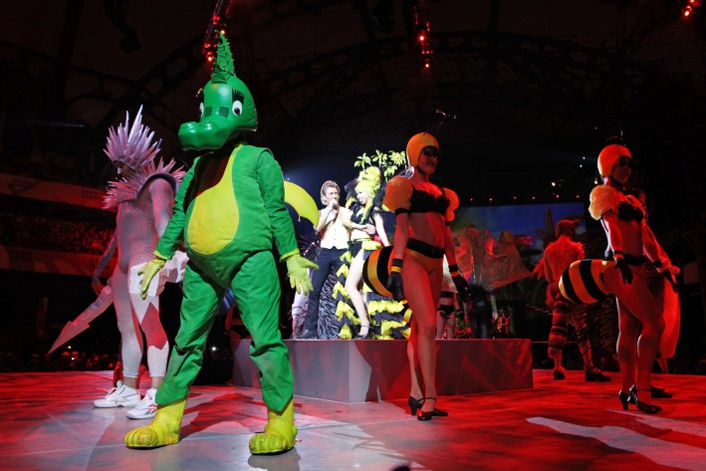 As the first link in the audio chain, the Sennheiser microphones played an important role in achieving perfect sound for the duration of the tour: “The 2000 series wireless system has impressively proved its excellent performance during the TABALUGA tour with outstanding sound quality, a large number of channels and reliable transmission over long distances,” said Thomas Holz, Key Account Manager for Rental and Artists & Engineers at Sennheiser Vertrieb und Service GmbH & Co. KG. “A passion for excellent sound is shared by both the creators of TABALUGA as well as Sennheiser.”

Arabian Nights
Echo Awards hits the high...otes thanks to Sennheiser
Scorpions: Live on Tape in 3D