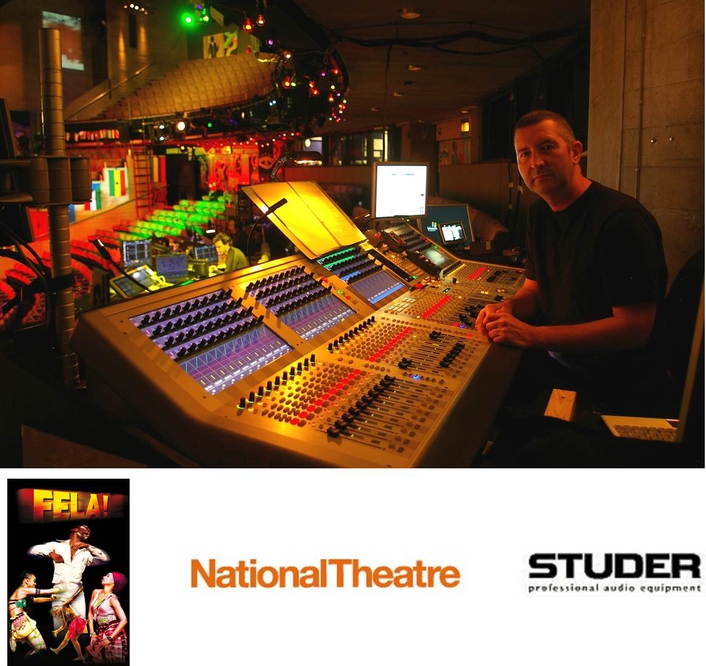 The Vista 5 comes in 32-fader and 42-fader chassis--and this production has opted for the additional bay of 10 input faders
When the Broadway blockbuster Fela! transferred to London’s National Theatre on the South Bank this month, Tony Award-winning sound designer Robert Kaplowitz took advantage of the auditorium’s vastly different form to rework his original soundscape, with a Studer Vista 5 digital console at the control centre.

Portraying the life of Nigerian political activist and musician Fela Kuti had required the audience to be immersed in a soundfield as part of the adventurous production--but at the National he decided to go a step further.

“I had hoped to have used this desk for the Broadway production--but for various reasons it didn’t happen,” said Kaplowitz. Of the advanced feature set offered by the Vista 5, the highlight--as far as this show is concerned--is the Virtual Sound Panning (VSP) feature. Offering phase and time delay, this is assigned to the 11-piece band (over 25 channels), to provide panning and a wide stereo image without level shifts.

As a result, the band audio image moves subtly. “They are on moving trucks which go back and forward and we can psycho-acoustically connect the image of the band without sacrificing gain in the whole room. It’s a big bonus having the VSP as we missed a lot of this on Broadway.”

Kaplowitz admits that the shape of the National’s auditorium had a strong impact on the mix. “This is a very different space--with 150-degree audience seating rather than a proscenium as on Broadway, where we used a runway to break up the proscenium space. At the National we are more ‘in the house’ and the VSP helps us bring the audience right into the show.

“We have ended up using a different output configuration--the flexible DSP allowed us to reconfigure the desk during our prep, and we were also able to use the flexibility of the DSP chips to add the Virtual Surround Panning.”

One of the elements important to both the sound designer and [choreographer] Bill T. Jones was the vocal surround. “The challenge was that he wanted to know where every actor was on stage with his eyes closed, and also be able to feel the surround.

“We use TiMax 2, utilising its crosspoint delay/gain matrix, to create various ‘zones’ in the house. Each of those zones is a zero point for the entire sound system, including the surrounds. The performers are placed in those zones, using the multitrack busses on the Vista 5 in conjunction with TiMax 2's Tracker system. These zones allow us the ability to fulfill Bill's request to localize the voices to their sources, while simultaneously allowing me to enfold the entire audience in the events onstage.” At the same time Studer’s dedicated VST host plug-in engine lets users run favourite VST effects either as inserts or on effects sends, with recall on Vista's Cuelist function. “This has allowed me as a designer to pick my output FX, and by freeing me for the plug-ins means I’m not limited.” The plug-in suite includes eight full-time Lexicon reverbs.

The ability to programme a custom channel / bus structure via Studer’s Config Editor, provided all the flexibility needed to structure a complex surround mix incorporating the TiMax spatialization.

The freely customizable console DSP structure has been designed around 80 mono and 20 stereo inputs, including 25 vocal inputs, a further 25 inputs from the 11-piece band (including percussion), and 12 channels of playback sound FX using QLab. The bus structure includes 32 mono and eight stereo auxes, 40 special multi-track busses for feeding the TiMax system and 18 mono subgroups for the band. Each band subgroup is split into L/C/R feeds which in turn feed eight mono matrices.

“By using a MADI interface to hook up to the VST engine it meant I could theoretically have any VST plug-ins I wanted via the host software without it eating up DSP. For instance, we found a VST plug-in version of a sub-harmonic synthesizer and added it to our virtual rack. We could use all the DSP in the Studer desk without having to waste capacity on outboard FX.”

Given the complexity of the show, Robert Kaplowitz’s task was boosted by the support he received from Studer’s sales director, Jamie Dunn, and product manager Peter Weber--with many show files bouncing back and forth between Kaplowitz and Dunn to achieve the optimum structure within the processing capacity.

The Vista 5 comes in 32-fader and 42-fader chassis--and this production has opted for the additional bay of 10 input faders. “It’s important to have more faders under your fingers,” believes Kaplowitz. “With this control surface it means Paul [Stannering] has access to 12 VCA’s on the control bay without having to go to another layer which is great.”

In addition to the flexibility and speed of the VCA’s, ease and speed of programming and an intuitive cue list structure are further attributes of the desk, he states.

“In fact the console has been able to keep up with everything. We recently added an encore and with just 20 minutes notice, we programmed the desk while the singers were learning the song--the speed with which the Vista could deal with this on the fly was amazing.”

And Paul Stannering seemed far from fazed by his first outing on the Studer desk. ”It can be a difficult learning curve on both a new desk and a new show--particularly one as complicated as this--but it’s acquitted itself well and with an intuitive interface, it’s been a quick learning curve.”

In summary, Robert Kaplowitz says, “Whereas the sound desk we used on Broadway did the job, the Studer is made to do the job-- we haven’t needed to trick it into things.”