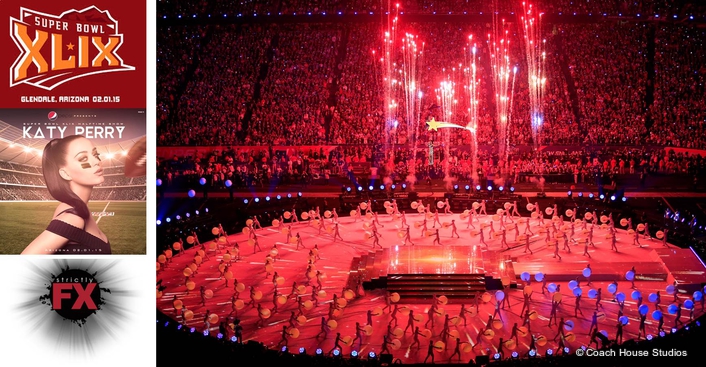 New products from the firm added excitement to Katy Perry’s production
year, the NFL Super Bowl attracts hundreds of millions of viewers; many are there for the football game. Others are there for the halftime. The core create team includes Executive Producer Ricky Kirshner of Touchdown Entertainment, Production Designer Bruce Rodgers of Tribe Design and Special Effects Designer Mark Grega of Strictly FX.  “The production is really a team effort. It’s the third year that we’ve been working with Mark; his creativity and experience are a vital part of creating a memorable Super Bowl Halftime,” states Rodgers.

For the Super Bowl XLIX Pepsi Halftime featuring Katy Perry, the special effects portion of the production was remarkably flexible. “We change the show up until the day of- in fact, we made changes on Super Bowl Sunday, because of the camera shots. We try to maximize the best shot that the director, Hamish Hamilton, is going to take and the best effect at that moment,” he explains.

From a design standpoint, the camera is a critical player in the Halftime performance. “With Katy’s songs, she had a lot of great cues. Normally take every cue, but in Super Bowl Halftime, we don’t have that luxury. There are certain moments that are dedicated to camera shots, and on those camera shots, there’s no point in doing an effect if it’s not going to be on camera, so we tend to design around those camera shots to maximize the exposure,” says Grega.

The venue itself always has to be considered, since the field has to be clear of any smoke approximately six minutes after the finale. “We went into the University of Phoenix Stadium in December and did a full demonstration of what we were proposing to shoot with the roof open and with the roof closed. At that time, we found it was somewhat acceptable amount of smoke, and we decided that we would put more of the resources on the roof to make the show bigger outside,” the special effects designer adds. In fact, Grega had an A and a B shows, depending on the roof. 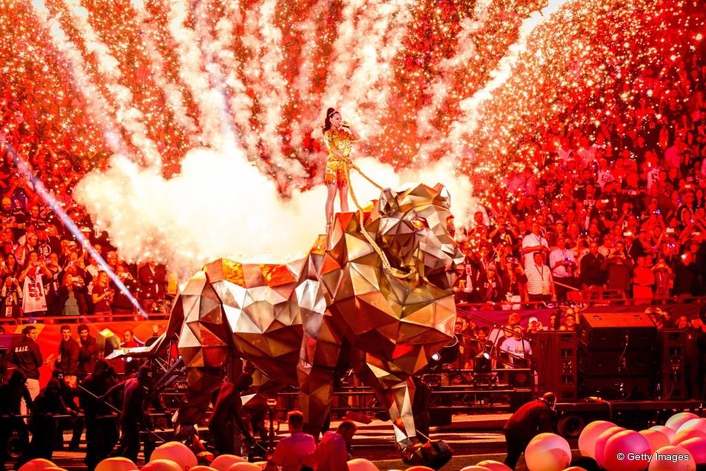 Both the open and the finale of the Halftime featured special effects, specifically pyro. “For ‘Roar,’ the first song, we had the nice big opening pyro hit with gerbs and comets, on the downbeat with the first vocal right behind her on the lion. As for ‘Fireworks,’ that was always going to be a song that we were going to be able to do and shine,” he notes. For the finale inside, Grega and his team from Strictly FX used an impressive amount of Ultratec low smoke product, including silver gerbs, mines, comets and white, red, blue, orange and yellow airbursts.  “We also had 20 pyro positions on the rooftop- they were spread out about 125 feet apart, and up there we had fully consumable aerial shells, mines, comets , crossette plates, mine plates and comet plates,” he adds. Inside the stadium, there were 210 pieces of pyro shot for the finale; outside there were  approximately 800 blasts and bursts. “There’s a delicate balance between the two visual worlds on site- one world of the ‘live show’ in front of 80,000 and then television audience of 114.5 million. We usually base FX cues on our musical interpretation of the track and or the artists/dancers choreography but on the Super Bowl it is about the whole visual experience,” Grega explains.

Perry also flew during the finale on a custom rig that featured a sparkling tail of pyro. Grega says, “For Katy’s fly gag, we used a Le Maitre ice fountain, which was shot wirelessly with FireOne and their four channel wireless receivers.” Rodgers adds, “The ice fountain that Mark added to the fly rig was another creative touch that we have come to expect from Mark as a designer.”

The Halftime was also the world premiere of a new proprietary product- the Strictly FX Liquid Propane Urn, which appeared during ‘I Kissed a Girl.’ Grega says, “The Urn is our classic design, where you have a standing flame and then an accent effect. For this show, we re-wired them so they could shoot liquid, so that they could be really big.” Six of the Liquid Propane Urns were featured during song; those flames went to a maximum height of 35’. Four TBF Five Masters flame units- which Grega nicknamed the Five Fingers of Death- were also placed behind the duo. 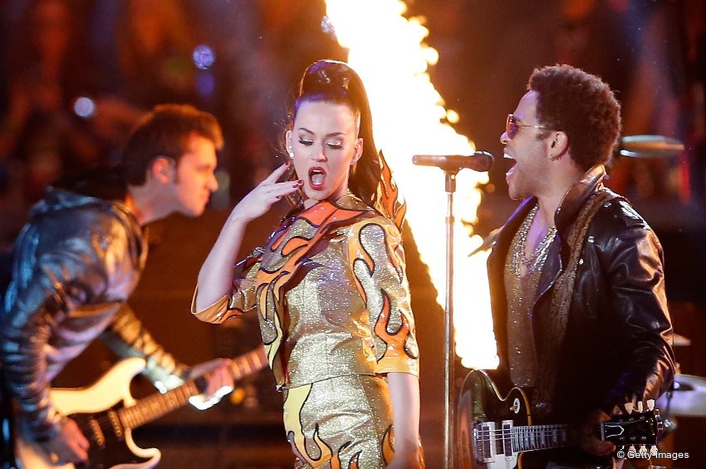 The flame units used on the duet with Kravitz were flanked by Ultratec G3000 Mega Fog Bursts. “Everyone loves CO2, and it’s a great gag, except in February in Arizona, where there’s relatively no humidity, and CO2 is heavily reliant on humidity to produce the effect,” Grega says. CO2 was out, but Grega had the Mega Fog Bursts.  He explains, “It was my go to for this show, and it worked great. It did exactly what we needed it to do, which was to instantly produce a big column of smoke.”

Another proprietary product- the Strictly FX Smoke Blade- was used to reveal special guest Missy Elliott. Grega says, “The Smoke Blade is powered by High End FQ 100’s.  We used the nitrogen to turbo the smoke through  the Smoke Blade which gives us a 6’ wide by ½” deep wall of smoke that goes up about 8’.” The smoke is opaque, but thin, so it dissipated rapidly.

The team with Grega on the field was also a critical part of the production. “This time, we had a lot of veterans on the show since this is our third year, but we also had a couple of new guys, and it was a great crew. Everyone stepped up,” Grega notes. The crew included Programmer/ Field Operator Adam Biscow, Rooftop Crew Chief/ Resident Cowboy Ron Bleggi, Rooftop Pyro Operator John Lyons and Effects Carpenters Brock Blakely and Dave Gauthier. “Year after year, Mark and his team bring not only their considerable effects expertise to the Super Bowl Halftime, but they also bring a positive attitude, which is certainly welcome on a high profile, high stress show like this one,” Rodgers concludes.

About Strictly FX
Strictly FX specializes in world class pyrotechnics, artfully programmed lasers, cryogenic effects and more for live events. The firm also holds several industry specific patents. The firm was founded in 1996 by industry veterans Mark Grega and Ted Maccabee, and developed a sterling reputation for pushing the creative boundaries and exceeding worldwide safety standards, all while staying deliberately under the corporate radar. The office has grown to include a road worthy team of special effects technicians, in house artists, as well as a detail oriented office staff that’s knowledgeable about regulations faced by the industry around the globe. Clients such  Roger Waters, Coldplay, Justin Bieber, the Black Eyed Peas and more have reluctantly yanked the firm out of the metaphorical haze, and, as a result, they’ve won  numerous industry awards, including the Parnelli Pyro Company of the year  in 2007, 2009, 2010, 2011 2012 and 2014, as well as the "Top Dog" pyro company of the year 2013 and 2015.