“I actually said out loud, ‘wow, this is amazing’”
This summer’s Commonwealth Games in Glasgow were preceded by Live at Edinburgh Castle, a 2.5-hour multi-act concert, televised live on the BBC from this unique location that dominates the Edinburgh skyline. The line-up for the event was extensive and included Culture Club, OneRepublic, Kaiser Chiefs, Motown legend Smokey Robinson, Jessie J, Paloma Faith and Il Divo. Various acts were backed by a 12-piece house band and the BBC Scottish Symphony Orchestra. To keep up with the fast-paced nature of the high-profile event, two SSL Live consoles were provided by Britannia Row Productions Ltd.

Though the event was headed by Brit Row Project Manager Lez Dwight, with Stefan Krista managing the inputs and cross-patch from scores of 12-way sub-snakes, Nahuel Gutierrez operated one SSL Live for the 75-member orchestra, generating group stems for FOH, monitors, BBC broadcast and 16 personal monitor stems for the orchestra. Niccolo Antonietti used the second SSL Live console to mix monitors/IEMs for the house band, along with guest vocals, guest backline and Pro Tools® tracks, totalling 60 outputs for 30 stereo mixes. Both SSL Live consoles were located remotely with only a BBC program shot to watch. As freelance engineers, rehearsal for the Edinburgh Castle concert was the first time Gutierrez and Antonietti had the opportunity to use an SSL Live console.

Antonietti’s console handled the house band, made up of drums, bass, guitars, two keyboards, percussion and three backing vocals, as well as director Mike Stevens’ keyboard and guitars. He also controlled the handheld microphones for guests, ambient microphones, intercoms, BBC feeds and 16 channels of Pro Tools, bringing Antonietti’s desk to 120 input channels. The two SSL Live consoles also had a MADI connection between them to feed stem subgroups back and forth.

“The orchestra was using personal monitors, so I sent them band stems, like guitar, rhythm section, keyboards and vocals, as well as Pro Tools stems,” Antonietti explains. “I then received a premix of the orchestra and of all of the other channels that I couldn’t get on my desk.”

Antonietti found the stems feature extremely advantageous. “The stems are especially important when you have that much to mix, with guests coming and going that you have to mix for and keep track of in such little time,” he says. “I could just mix the guest IEMs using stems, so it was really, really helpful. It was one of the best features on SSL Live for this show, because you can have a lot of channels that don’t need full processing.” 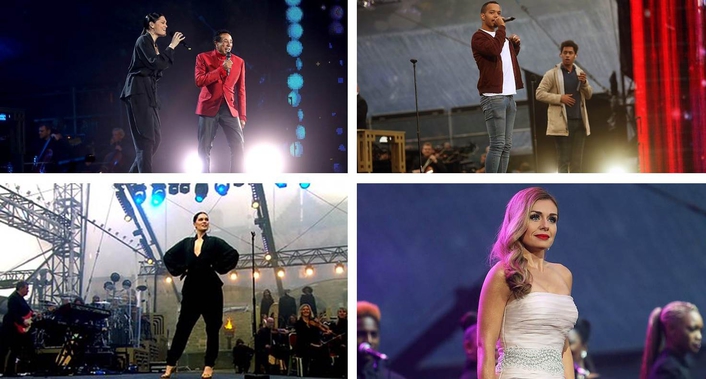 Over on the orchestra’s SSL Live console, Gutierrez used channel delay to synchronize the orchestra’s inputs. “The delays made everything sound a lot fatter and we loved it,” he says. “We measured the distances on stage and then put natural time delays from back to front, so percussion had the biggest delay and the first violins and cellos up front had the shortest delay.

With just a minimal amount of time to acquaint themselves with SSL Live at southwest London’s CATO Rehearsal space, Antonietti and Gutierrez had no trouble getting a feel for the console. “I felt very comfortable because SSL sent product specialists to help us out; after they showed me how to get into the system, it was really easy,” explains Antonietti. “We set up on Wednesday before the show on Saturday, so we only had a few days for the guests to rehearse with the orchestra and band. The quick learning curve of the SSL helped made rehearsals simple.”

Antonietti mentions SSL Live’s sound quality as his favourite feature. “The sound quality on the console is amazing; its preamps and its stereo capabilities are great,” he says. “I only needed to make slight gain adjustments to make it perfect and some EQ’ing to the really high and low ends to make it sound balanced for the IEMs. The console just sounded really good.”

“The most amazing thing about the desk is the sound,” echoes Gutierrez. “I’ve never played with an SSL before and the sound is crisp and very, very nice. It also has a wider stereo image than other desks. Don’t ask me why; that’s what I’m hearing with my ears.”

Gutierrez also mentioned SSL Live’s cueing. “One of the things that really amazed me was the solo feature,” he adds. “Being able to route the solos on any output, once you get your head around it, is really brilliant. Not having to preset the solo is really amazing. I actually said out loud, ‘Wow, this is amazing.’ ”