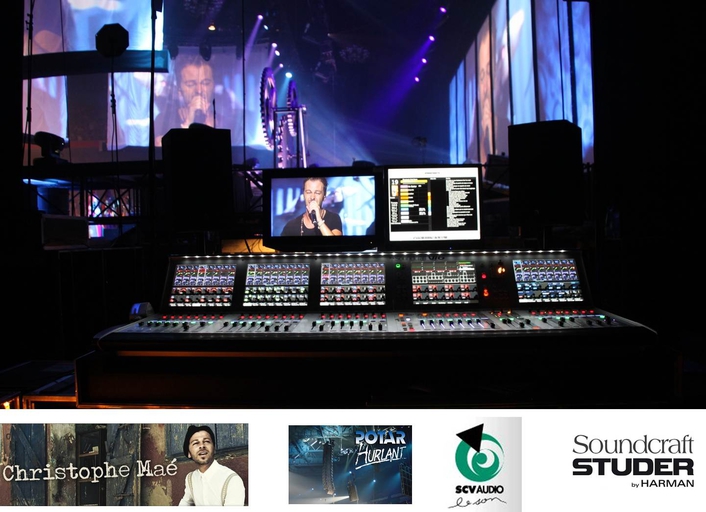 A fully equipped 96-channel Vi6 is assigned to the IEM’s
Experienced Paris-based monitor engineer Laurent Midas has been mixing Christophe Maé’s Autumn national arena tour for the first time on a Soundcraft platform, using both a Vi6 and a Vi2.

The sound man has been providing a reference mix for the best-selling French singer’s backing band, including drums and bass, two guitarists, a keyboard player and two backing vocals. A fully equipped 96-channel Vi6, provided by French rental company Potar Hurlant, is assigned to the IEM’s, with sends to the floor monitors (plus additional mixes for guest performers) from a Vi2 (supplied by Soundcraft’s French distributors, SCV Audio).

Growing up in the studio environment and then developing his own home studio, Laurent Midas switched to live sound 15 years ago. He quickly made a niche for himself as a touring monitor engineer, winning a number of prestigious accounts—mostly in Monitor City. “You could say I am specialised in IEM — around 95% of the time I am mixing in-ears … with or without wedges,” he says.

Until recently he had been working in a different digital environment—but six months ago he was introduced to Pascal Briam at SCV Audio, and his life changed. Laurent was soon beta testing the latest Soundcraft Vi digital software for the Soundcraft Vi4 and an enlightening visit to Soundcraft HQ in the UK followed.

Not that the sound engineer wasn’t already familiar with the operating topology. “Working in studios I became familiar with the Vistonics™ interface from using the Studer Vista desks. I encountered the Soundcraft Vi6 four years ago, when the product was first released and was pleased to see that it used the same engine.”

“When the software was adapted for the Vi4 it became like a brand new desk for me. I love the quality of the sound — just as I loved that Studer Vista sound.”

When Christophe Maé started to experience problems with his previous monitor sound two years ago Laurent was drafted in “to clean up the mix” — and he has remained with France’s biggest album seller ever since. “This is probably the biggest tour I have worked on — other than Mylene Farmer in 2009,” he declares.

The features of the Vi6 have certainly found favour with Laurent. “Definitely the sound is my first goal — and I’m very happy with this desk. I also love the intuitive Vistonics touch screens and the MADI connection too — giving the ability to work in playback mode for virtual soundchecks.

Other features of the Vi highlighted by Laurent Midas are the 'isolate' channels and parameters — which he says are the most powerful and flexible that he has seen — the Aux VCA, the user-definable layers and the Fader-Glow colour-coded desk design.

Having entered the world of Soundcraft quite late on it seems there is now no turning back. “I now look forward to being able to save sessions which can be used right across the Soundcraft Vi portfolio — on Vi1, Vi2 Vi4 and Vi6 without trouble,” he says.