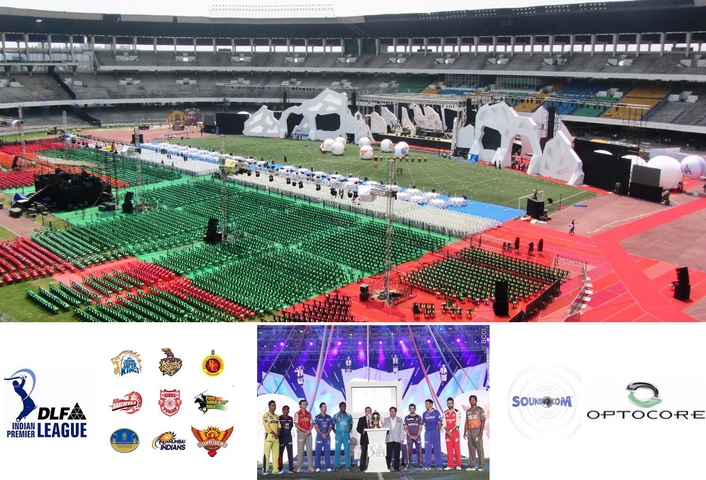 .
Since 2010, SOUND.COM has been at the forefront of some of the biggest sporting and entertainment events in India.

Therefore, when the company embarked, at the beginning of the new financial year with the Opening Ceremonies for Indian Premier League, the world-leading Twenty20 cricket championship, they were confident they could put on an audio spectacle to match similar ceremonies, starting with the Commonwealth Games 2010, The National Games in Ranchi and the Oman Tattoo in Muscat.

The multi-purpose Salt Lake Stadium in Kolkata was chosen to host the opening ceremony of the cricketing franchise this year with the inauguration promising to be one of the most spectacular events ever witnessed. Built in 1984, the stadium is the largest in India and the second largest in the world with a capacity of 120,000. With its astroturf surface the facility primarily caters to football matches and has also hosted athletic events in the past.

But according to SOUND.COM MD, Warren Dsouza, it isn’t an easy venue in which to design and deploy an audio system. “It takes a lot of experience, and one has to work through a lot of infrastructure related obstacles in order to put a system together.”

With bases in Mumbai and Delhi, SOUND.COM sent a proposal to main contractors, Dutch based Poly Worldwide Entertainment setting out their credentials. “The belief that they had chosen the right audio company in India was established as soon as we opened our flight cases,” he said. “We had had everyone inspecting and admiring our Optocore digital transport system and our self-styled OptoRacks,” he said.

The latter combined a large number of Optocore devices with Dolby Lake processing, and the Optocore network was wired in a redundant ring for fibre failure back-up. Additionally there was an analogue back-up to each amplifier position.

“This technology has allowed SOUND.COM to scale to any level of audio production, no matter how big the stage is. But nothing takes away from the human element — and the ability to integrate all this is the ultimate key to a successful show,” said D’Souza.

The successful cooperation between SOUND.COM sound engineer Sunil Karanjikar and co engineer, Poly Worldwide’s Fred den Dulk, with their respective teams, had been the underlying reason for a successful show, he said.

Sound.Com deployed four OptoRacks, each consisting of 1 x DD32R-FX and 1 X6R-FX (16 Mic In) units. One each was positioned at the console, stage left, stage right and at a central delay position for the delay arc. Also available were Optocore DD32R-FX, DD4MR-FX, DD2FR-FX MADI interfaces, although on this occasion the event was not multitracked.

Finally, the racks also housed a network switch that ran via a spare fibre link in the cabling, to help provide network control over the Dolby Lake devices. Stated Sunii Karanjikar, “Optical isolation allowed us to run the various positions on different gen-sets without having to worry about power induced issues.”

Katrin Kaifa at the IPL Opening Ceremony in Kolkotta

However, the stadium would get extremely hot and humid — as high as 38°C — and so all devices had to be continually monitored for overheating.

And here Optocore came to the rescue, as Sunil Karanjikar explained. “Though the network switches developed a communication error because of the heat, the Optocore devices performed flawlessly and we were able to use the System Ethernet option on the Optocores to regain control of the Lake devices which we had lost.”

For headline act Pitbull, the touring engineers had specified Avid consoles and SOUND.COM supplied the entire kit and backline gear for the act as well. The consoles were patched into the PA and monitors using Dolby Lake devices and the input matrix feature on the devices helped to match multiple consoles.

Summing up, Warren Dsouza said, “The main challenges were really logistics — weather, rigging, getting the gear into the stadium with West Bengal waybill bureaucracy. Actually the business of putting the kit together and executing the show was a breeze.”

And Sunil Karanjikar added, “As for the Optocore, the visiting engineer specifically commented as to how the network seemed a lot faster using this system than on a dedicated IT network switch.”