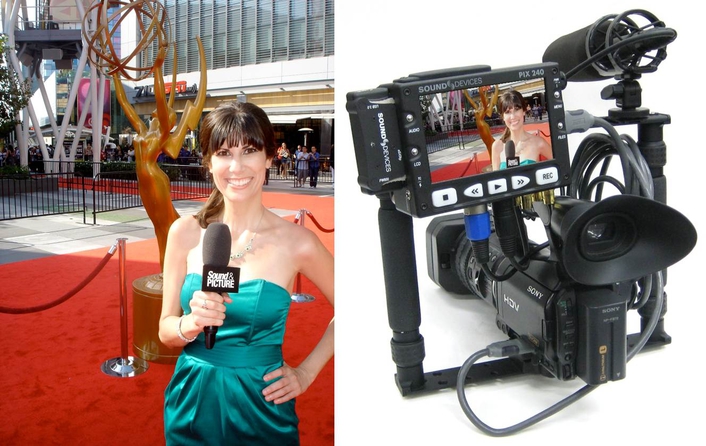 Working for professional audio equipment reseller Coffey Sound, Daron James appreciates the convenience that quality products bring to his customers. However, in his role as editor for Sound & Picture magazine, it’s these very products that help streamline video productions for the publication’s website, including his recent work on the red carpet during the Academy of Television Arts & Science’s 63rd Creative Arts Primetime Emmy Awards. In order to capture both audio and video during red carpet arrivals, James selected the Sound Devices PIX 240 to join him on one of Hollywood’s biggest nights.

“The new PIX line of recorders address the workflow changes Sound & Picture has been trying to promote,” says James, who had the role of producer during the shoot. “It’s not just sound people doing sound anymore — it’s cinematographers working with picture and sound units, so it’s great that a manufacturer is actually developing something to bridge the gap between the two departments.”

On location at the Nokia Theatre in Los Angeles, James and his team were able to extend the life of their tape-based 1080i Sony HVR-V1U camera, by selecting Sound Devices’ PIX. “The idea was to bypass using tape and revive an older camera,” James explains. The PIX 240 enables a faster workflow because when you’re done shooting, you simply drag and drop files from the hard drive. An hour of footage took 15 seconds to drop over, which was really nice.”

According to James, the PIX 240 mounted easily for a problem-free production. James hooked the HDMI output of the Sony camera to the HDMI input of the PIX 240. He then used the XLR inputs on the PIX 240 for a Sennheiser MKH 8060 microphone and a Sennheiser EK 2000 wireless transmitter. Combined with the PIX-CADDY and the PIX-256SSD hard drive, recording the red carpet footage was a cinch.

Using the PIX 240 enabled James to shoot a more film-like 24p instead of the camera’s 60i frame rate. He then matched the Sony’s 8-bit output to an 8-bit Pro Res 422LT codec on the PIX 240. “With the PIX 240 configured the way we had it, we were able to record up to eight and a half hours of footage,” continues James. In addition, recording to the hard drive allowed him to use the HVR-V1U tape system as a backup to the recorded footage on the PIX 240.

“Logging the recorded footage from the PIX 240 for editing couldn’t have been easier,” James adds. “We plugged a USB cord directly into the PIX Caddy and were able to copy the footage over in seconds, saving us a lot of time logging from a tape in real time.”According to James, the PIX 240 was the perfect addition to his on-location team. The five-inch, 800 x 480 pixel LCD display monitor worked well in sunlight and the hood accessory assured there were no reflections. “The viewing monitor allowed us to see the record time, frame rate and more importantly, the audio levels, which made audio adjustments quick and seamless,” says James. “The levels in the PIX 240 menu are very easy to get to and adjust. You have this huge knob on the PIX 240 so you can click, move and adjust it on the fly.”

“I couldn’t have been happier with the workflow of the PIX 240,” says James. “From its versatile production options to the fast setup for post, the PIX 240 made our shoot easier and much more reliable. I’ll never complain when it comes to having Sound Devices audio pre-amps on my side, they’re amazing!”