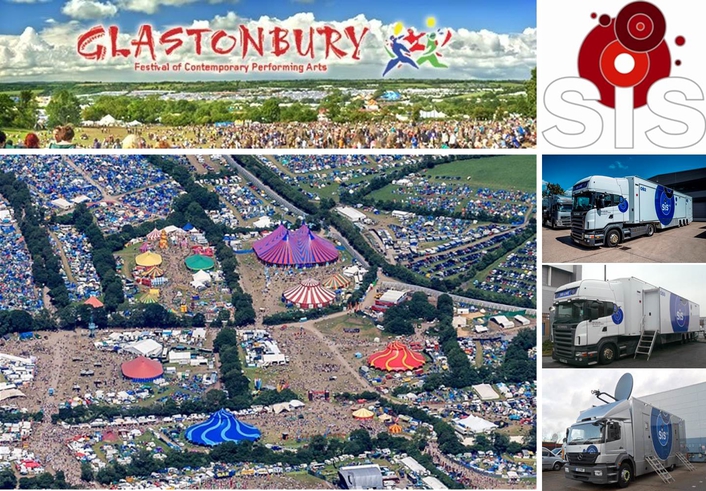 .
After a break in 2012 for the Olympics (and to give the Worthy Farm cow’s ears a rest) the 31st installment of Glastonbury Festival returned this year. The largest greenfield festival in the world it attracted over 135,000 people and was seen by millions more watching on a multitude of channels and devices around the world.

This year’s festival featured the usual impressive array of high profile and up and coming acts, including a first ever appearance from the Rolling Stones, as well as a plethora of weird, wonderful and wacky installations and performances around the vast site.

SIS LIVE, and previously as BBC Outside Broadcasts, have supported the BBC in its event coverage of Glastonbury since 1997 (the year of Radiohead’s unforgettable headline slot) working collaboratively to enhance the coverage and ensure successful output through even the most trying of conditions. 2013 was billed as the first truly digital broadcast of the festival and duly delivered, with a record 1.5million users accessing online coverage of the event through various devices and portals. Over the long weekend over 120 live performances and more than 250 hours of live coverage were generated and made available across multiple screens.

SIS LIVE delivered coverage from the four main stages – the Pyramid stage, the Other Stage, West Holts Stage and the Park Stage – as well as online coverage through the night from BBC Radio 1’s Shangri-La area. 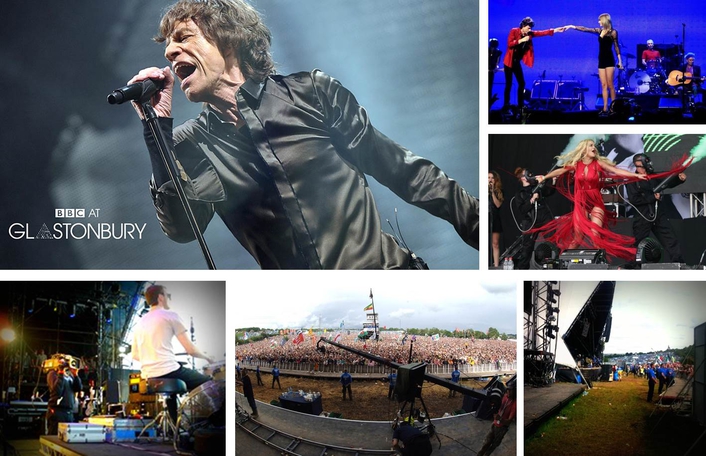 Coverage of the Pyramid Stage, which featured performances from Arctic Monkeys, Mumford & Sons and, of course, the Rolling Stones, was produced by SIS LIVE’s OB 8 outside broadcast vehicle. All the action was captured by 13 HD cameras, including on stage hand helds and a steadicam; 2 cameras on Osprey pedestals and one jimmy jib in front of the stage; a camera mounted on a track in front of the mixing tower (carefully angled to see beneath the banners and flags people were waving); a hoist up on the hill at the back of the crowd facing the Pyramid Stage. One lucky camera person was even placed amongst the crowd at the midway crowd barrier. These innovative positions afforded viewers at home an immersive view of the performers plying their trades. SIS LIVE audio engineers rigged microphones to capture the cheers and singing of the crowds, skilfully mixing these with the stage mix of the music. Live feeds were distributed to on site screens, the lighting teams and for broadcast.

Over on the Other Stage OB 9, one of SIS LIVE’s single expanding OB trucks, captured performances from headliners Portishead, Chase & Status and The XX, as well as 24 other acts across the weekend. 11 HD cameras provided various views from the mixing tower; track and jimmy jib cameras in front of the stage; and from stage left, right and rear. One camera was also placed backstage with a microphone for presentation and interviews segments, with talkback provided via incoming fibre.

OB 2 was over at West Holts Stage delivering coverage of a memorable sets from Chic (featuring Nile Rodgers), Public Enemy and Bobby Womack using 9 cameras. The Horrors, F**k Buttons and Cat Power headlined the Park Stage with 6 cameras capturing all the action. OB 16, SIS LIVE’s hybrid outside broadcast and uplink vehicle was parked up behind the stage (often seen in shot) and provided a comfortable, air conditioned home from which the production team created their programme.

SISCaster, a compact mobile production vehicle designed and built by SIS LIVE brought coverage of a different side of the festival – Shangri-La. This area has been a fixture at Glastonbury for the last three years and draws on more traditional ‘alternative’ festival roots, featuring music from bands and DJs, and beautifully designed sets and installations. BBC Radio 1, as sponsor of the area, approached SIS LIVE to deliver late night coverage on Friday and Saturday nights from this part of the festival, recorded between 11pm and 5am and broadcast on Radio 1Xtra and BBC 6Music.