Presented by Philip Schofield, Cube contestants can win up to £250,000 of prize money by completing straightforward tasks within a 4 x 4 metre Perspex cube, which becomes extremely challenging with the addition of disorientating visuals and sonic effects coupled with the pressure of performing in front of a live audience.

The video floor is an integral element of the show’s overall concept.

S+H also supplied the same quantity of 36 x Video Floor panels making up a 3.6 square metre surface area to the latest Ukrainian series of The Cube, which has now finished being filmed in Kiev. It is the fourth series of the Ukraine show that S+H has supplied.

The set design for both UK and Ukraine versions was created by Julian Healey who specified the S+H floor.

The UK series is recorded at Fountain TV Studios in Wembley, London, and broadcast on ITV 1.

Video Floor is a completely bespoke 18.75 mm video tile product available only through S + H Technical in the UK.

Using the ‘DIP’ system of three adjacently positioned RGB LEDs to populate the LED PCBs - as opposed to SMD boards - this produces a specific quality of pixel which is ideally suited to the Cube’s gaming video content that is displayed on the floor.

Robust and waterproof to IP65, LED Video Floor has an abrasive resistant surface and clear, polycarbonate covering. And with a load weight capacity of one ton per M2, it is also ideal for shows, parties, showcasing new product launches at motor shows, and on other exhibition stands.

The Video Floor is user-friendly to handle and assemble, and for a project like The Cube, a simple one-person installation. The Video Floor has also been used for the Portuguese version of the show.

S+H’s Terry Murtha says, “It’s great to see our product continue to be so effective and central to a top series like The Cube”. 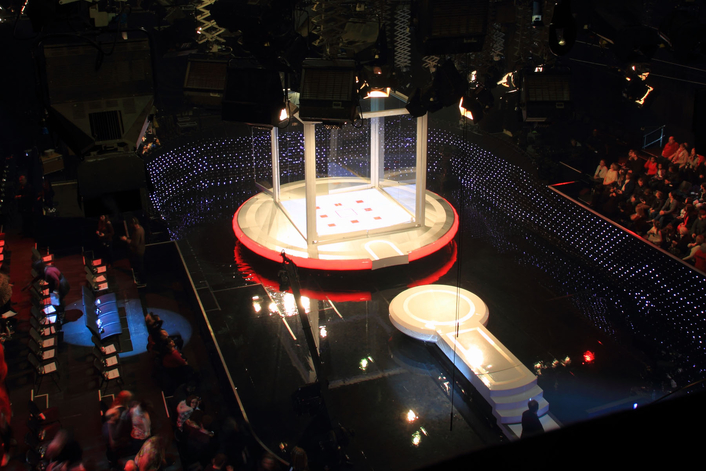 In June 2013, the company celebrates 20 years of business as a successful supplier to the television, exhibition, corporate and live events industry.