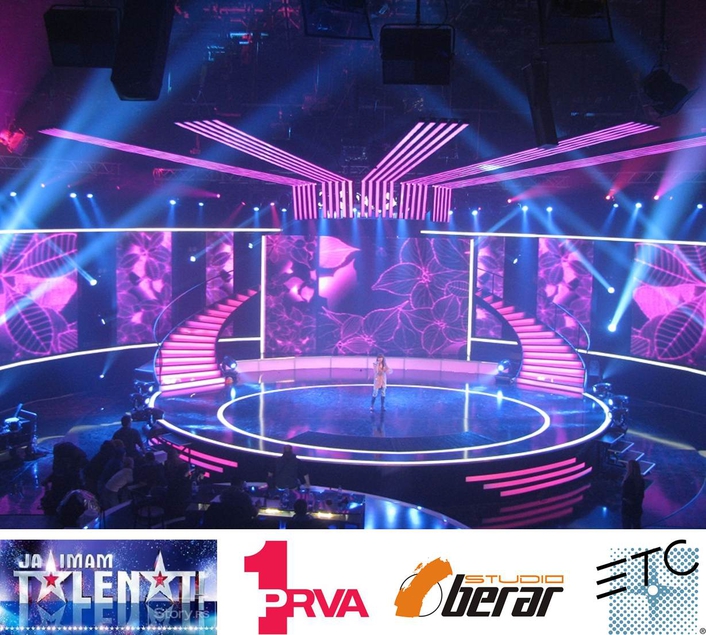 Prva is one of the most watched commercial television stations in Serbia
Serbian TV’s Got Talent – and now it sparkles even more, thanks to lighting director Viktor Trifu’s decision to light the local version of the show I’ve Got Talent! (Ja imam talenat!) with an ETC Ion control desk. The show is similar to other Got Talent programs across the globe, with its trademark huge stage and impressive lighting rig..

Says Trifu: “I decided to purchase an Ion control desk because of its compact footprint, allowing me to use it in any environment; and because it can be expand with up to six Universal Fader Wings. I purchased one fader wing for now, and am hoping to purchase another soon.

“Once I’d unpacked and started using the desk, I realised how easy it is to operate. The manual has plenty of detail, and I was able to get started very quickly. Ion is a very functional control desk – easy to learn and smooth to work on."

The desk was bought from ETC’s Serbian dealer, Studio Berar Projekt. Marketing Manager Lazar Jošanov says: “Kiki purchased the desk two months ago, and this was the first time that he used it officially. He is a great fan of ETC equipment, especially lighting desks; and he also works as a professor of lighting design at the Academy of Arts here in Novi Sad.”

Ion provides the ease, power and operational style of ETC’s Eos in a smaller package; its small footprint – at just 19” wide – is the perfect solution for space-challenged environments and small venues, and for when an easily portable desk is desirable. Providing fully integrated control of conventional and moving lights, the desk has a powerful effects package, alongside marking and timing functions.

Meanwhile, across on the other side of Belgrade, TV station Prva has built a new studio, complete with ETC dimming supplied by Studio Berar Projekt.

Aleksandar Kruščić, Studio Berar Projekt engineer says: “The network wanted to treat itself for its growing viewer market share. We installed six ETC SmartPack 12-channel dimmer modules in two racks, providing 72 ways of dimming – and the is room left in the racks should the network’s technicians wish to add more capacity. At the studio’s request, we supplied the packs with CEE 16A output connectors.”

Broadcasting nationally, with shows like Survivor Serbia (Survivor Srbija), as well as daily news and lifestyle programs, Prva is one of the most watched commercial television stations in Serbia.

ETC began more than three decades ago with the conviction that there was a better way to make a lighting control console. There was. We developed one of the first microprocessor-based systems, which boasted the then blindingly fast 2MHz 8080 CPU! Now our popular lighting control consoles – including the Eos®, Congo® and Smart Solutions™ lines – are thousands of times more powerful than those groundbreaking early versions.