Sennheiser Wireless for the ESC 2011 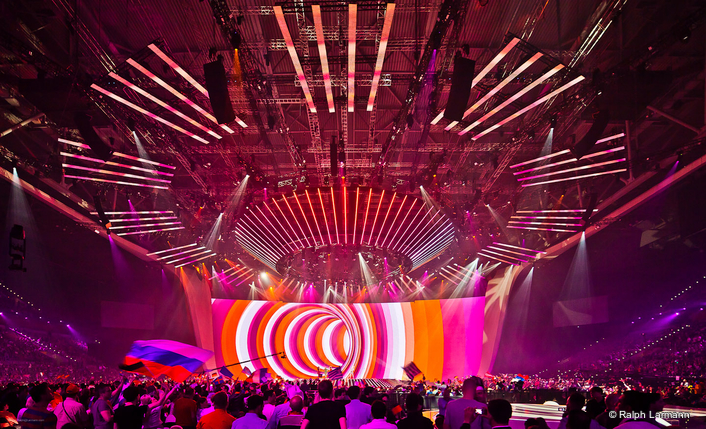 A kaleidoscope of colours appearing on the 60-metre wide and 18-metre high LED wall
Feel Your Heart Beat: the show followed on TV screens by an audience of around 120 million people on 14 May was one of superlatives. The competitors from 25 countries pulled out all the stops to try and win the 56th Eurovision Song Contest. With great technical efforts, German broadcaster NDR (Norddeutscher Rundfunk) had transformed the Düsseldorf football stadium into a gigantic TV studio for around 36,000 viewers on behalf of the hosting broadcasting association ARD. And, for the 24th time, the event organisers relied on Sennheiser for the artists’ microphones and monitor systems.

From green lawns to perfect show stages: the stage design by Florian Wieder thrilled the spectators both in the arena and in front of their TV screens. For the first time, the “green room”, where the artists sweat it out together while the votes come in, was an integral part of the hall. 160 lorries, each weighting 38 tons, had delivered the necessary equipment for the stage, lighting and sound to Düsseldorf. The kaleidoscope of colours appearing on the 60-metre wide and 18-metre high LED wall also extended on LED pathways into the auditorium, captured by 25 cameras. Total amplification power of 350,000 watts ensured excellent sound in the arena. An ESC record 163 frequencies had been reserved for the artists’ wireless microphones and those belonging to the hosts, as well as for the wireless monitoring activities and the press centre. 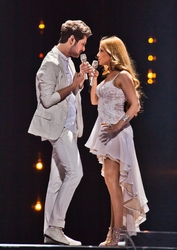 The hosts Stefan Raab, Anke Engelke and Judith Rakers used SKM 5200-II handheld transmitters with Neumann KK 104 S capsules. The artists sang with the same microphone combination, or used an SK 5212-II bodypack transmitter with HSP 4 headset microphone. Both options were used in combination with the EM 3732-II two-channel receiver. “These transmitters and receivers provide a switching bandwidth of up to 184 MHz, which gives sound engineers a very high degree of flexibility in terms of frequencies,” explained Ties-Christian Gerdes, President of Sennheiser Vertrieb und Service GmbH & Co. KG. This year’s Eurovision Song Contest saw the first appearance of the IE 8 earphones with individually adjustable bass reproduction, which many of the artists were thrilled to use as inconspicuous monitor earphones. All wireless Sennheiser systems were monitored and controlled remotely using the Wireless Systems Manager.

Markus Müller from MM Communications was responsible for frequency planning throughout the ESC. He and his team not only had to manage the 163 frequencies for the microphones and monitoring, but also an additional 120 frequencies for talkback systems, remotely controlled equipment and cameras. “Throughout the production, a 20-strong team guaranteed the strict time scheduling, as a show like this requires a really high level of reliability,” explained Markus Müller, Managing Director of MM Communications. “In Düsseldorf, we had not only the stray pick-ups of the gigantic LED wall to contend with as a source of interference, but also the large DVBT transmitter stations in Cologne , and radio signals from a trade fair that was taking place close by at the same time. With our frequencies, we exploited all the gaps in the entire UHF spectrum between 470 and 790 MHz in order to guarantee interference-free operation.”

Ties-Christian Gerdes added: “This time, the route from dressing room to the stage was extremely long. For this up-tempo show with its rapid song changes, the audio technology therefore had to be flexible and safe, and every member of the crew from MM Communications had to know exactly what to do.” The individual monitor mix for each artist was worked out in special rehearsals with the performers. The settings for all the acts were then saved on personal memory cards and read into the monitoring desk before each appearance, which also helped save time. 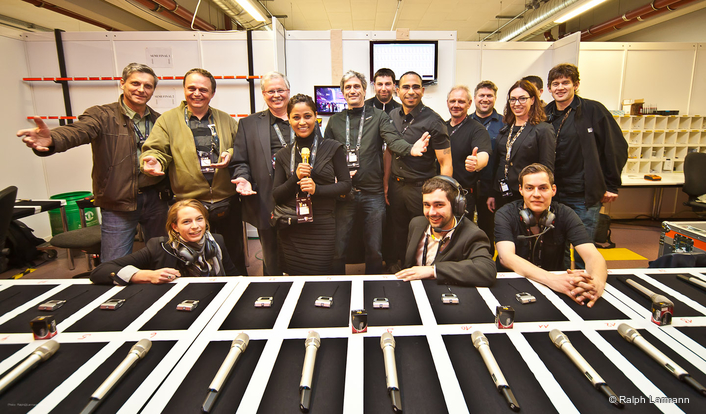 A 20-strong team guaranteed the strict time scheduling, as a show like this requires a really high level of reliability

Quite in keeping with the motto of the Song Contest, it was a really nail-biting final this year in which the result was uncertain for quite some time. In the end, Ell and Nikki from Azerbaijan prevailed as winners, taking the 2012 Eurovision Song Contest to Baku. 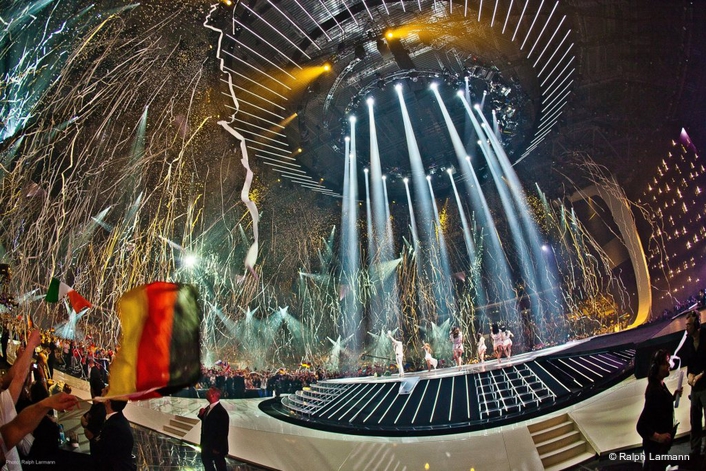 The Sennheiser Group, with its headquarters in Wedemark near Hanover, Germany, is one of the world’s leading manufacturers of microphones, headphones and wireless transmission systems. The family-owned company, which was established in 1945, recorded sales of around €390 million in 2009. Sennheiser employs more than 2,100 people worldwide, and has manufacturing plants in Germany, Ireland and the USA. The company is represented worldwide by subsidiaries in France, Great Britain, Belgium, the Netherlands, Germany, Denmark (Nordic), Russia, Hong Kong, India, Singapore, Japan, China, Canada, Mexico and the USA, as well as by long-term trading partners in many other countries. Also part of the Sennheiser Group are Georg Neumann GmbH, Berlin (studio microphones and monitor loudspeakers), and the joint venture Sennheiser Communications A/S (headsets for PCs, offices and call centres).

ESC 2011: And the Winner is NDR and the whole ESC Technical Team
The Eurovision Song Contest 2011