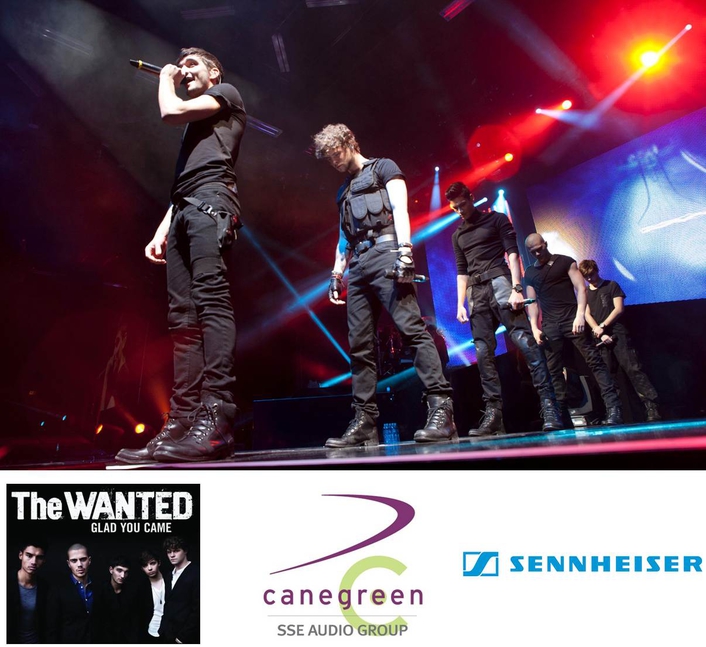 “The main reason I use Sennheiser equipment is for its sound”
The Wanted’s 2012 UK Arena tour drew to a close in Dublin at the beginning of March and notched up another success for the boys. Audio requirements for the tour were supplied by Canegreen and SSE Audio, with Ryan McLean manning monitors and Andrew Thornton taking on both Front of House and production manager duties. Both engineers were unequivocal in their assertion that Sennheiser microphones and in-ear monitors were the right choice for the band.

“The main reason I use Sennheiser equipment is for its sound,” says Andrew, who has specified SKM 500-935 G3 for vocals, with a combination of e 904, e 901, e 906 and MKH 40 for backline. “We’ve tried these guys with all sorts of different microphones and the 935 sounds particularly good with their voices and gives me loads of volume before we have any feedback issues. Plus the boys like the feel, the way the microphone handles and the way it looks.”

“Sennheiser has been involved with The Wanted right from the very start,” adds Ryan. “We wanted them to get used to the quality they could expect for the rest of their careers at the very beginning, with both microphones and in-ears. Today, as well as the SKM 500 mics, we’re using ew 300 IEM G3 for their ears.”

Ryan emphasises the importance of becoming familiar with the nuances of using in-ear monitoring.

“From the moment we started the schools tour and playing nightclubs we’ve had in-ears, just to get the guys used to them and to using them in different environments - people think when they go onto in-ears it’s going to be exactly the same every night, but there are differences in the rooms and the acoustic environment. We’ve upgraded from the G2 to the G3 and they have noticed the change. They don’t necessarily know the specifics of why it is different, but everyone has commented on an increase in quality.”

In the venues where space allowed, a thrust stage was included, so distance was an important consideration.

“One of the main issues when it comes to RF is the guys walking out of my site line. When that happens, I need to know that everything is still going to be OK. We didn’t have any RF problems throughout the tour,” smiles Ryan. “It was rock solid all the way through. There were a few anomalies in certain venues, but that happens and being able to rescan and select a different frequency that worked is very simple on the G3 system.

“The support from Mark [Saunders] and the Sennheiser UK team is also excellent. They’re always on the end of a phone and if we ever do have any issues, they’re resolved extremely quickly.“

“I have been working with Sennheiser for about 14 years now,“ adds Andrew. “I’ve tried out a number of mics for them. In fact, I tried out the prototype of the 935 capsule about seven or eight years ago. The sound quality and the support are the main reasons that I keep using them. I have a sense of loyalty towards them, of course, for the years of good service they’ve provided and for looking out for me. But even so, if the equipment didn’t sound good, I wouldn’t use it.”