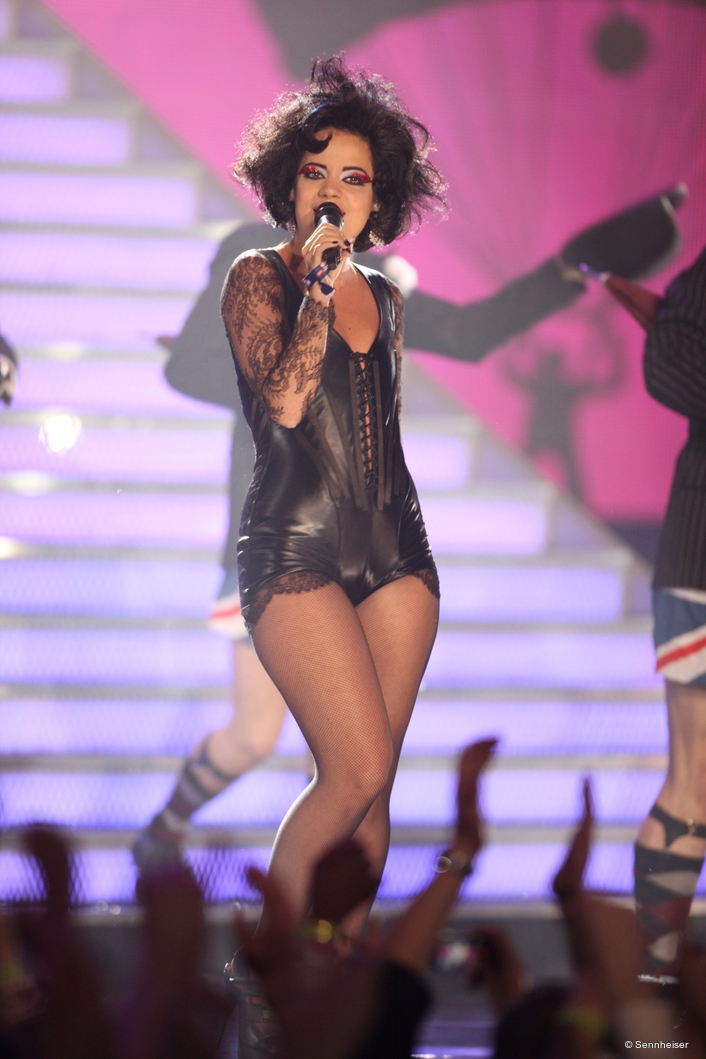 Lily Allen
The annual BRIT Awards are as well renowned for their celebrity escapades – this year Liam Gallagher lobbed his microphone into the audience after accepting his award for BRITs Album of 30 Years for (What’s the Story) Morning Glory? – as they are for honouring the very best in music. The antics do not, however, eclipse the performances and great audio is high on the list of production priorities.

For the 8th year, Sennheiser UK offered the comprehensive technical support that BRITs’ sound designer Derrick Zieba. He relies on for this and other major events he is involved with.

“The BRITs is a very similar type of show to the MTV European Music Awards and relies on similar support,” says Zieba. “The RF requirements are very complex and for that reason having the Sennheiser team on hand is essential in order to have access to all the bands we need to licence on site for the show.”

All audio requirements were supplied via Britannia Row Productions

“As well as the usual high level of service they provide, Sennheiser UK did some extraordinary things for us that we just wouldn’t have time to do ourselves, and that no other supplier would do,” recalls Zieba. “For example, a highlight of the show was the duet between Dizzee and Florence. Dizzee has a special mic, but Florence doesn’t. However, her management decided they would like to have one. So Andy Lillywhite of Sennheiser UK stripped out a mic, gave the shell to one of the Blackfriars team, who took it away and sprayed it gold. Florence used it for the show and it was virtually indistinguishable from Dizzee’s mic.”

“Having been involved with many artists who have performed at large shows over the years, it is always good to know that Sennheiser is on site assisting when and if required, with what is clearly a very RF heavy show,” adds visiting engineer Andy ‘Baggy’ Robinson. ”Both of the acts I came in to mix monitors for at the BRITs used Sennheiser products and, as ever, both the products and the support made things run very smoothly in an environment where radio is a very high priority thing.”

“It’s always an honour to be part of the team that works at the BRIT Awards,” concludes Mark Saunders, artist relations manager with Sennheiser UK. “It’s a high pressure environment, so using equipment we have the utmost confidence in is of paramount importance. The evolution wireless and SKM 5200 radio mics have performed flawlessly again this year – and we know they can even carry on after being thrown into the crowd.”

The Sennheiser Group, with its headquarters in Wedemark near Hanover, Germany, is one of the world’s leading manufacturers of microphones, headphones and wireless transmission systems. The family-owned company, which was established in 1945, recorded sales of over €385 million in 2008. Sennheiser employs more than 2,100 people worldwide, around 55% of whom are in Germany. Sennheiser has manufacturing plants in Germany, Ireland and the USA, and is represented worldwide by subsidiaries in France, Great Britain, Belgium, the Netherlands, Germany, Denmark (Nordic), Russia, Hong Kong, India, Singapore, Japan, China, Canada, Mexico and the USA, as well as by long-term trading partners in many other countries. Also part of the Sennheiser Group are Georg Neumann GmbH, Berlin (studio microphones), and the joint venture Sennheiser Communications A/S (headsets for PCs, offices and call centres).