.
Touring a mixture of arenas and stadiums in Europe and North America since the later part of 2011, Coldplay’s desire to get close to their fans in such large venues could have caused a number of problems for their wireless monitor systems. But with Sennheiser’s high quality customer support, a bespoke solution ensures that the band never miss a beat.

The shows are performed on a main stage with a centre runway projecting out and ending in a second, smaller 'B' stage. In addition there is also a C stage at the back of the arena, right amongst the audience. The entire band wears Sennheiser 2000 series in-ear monitors (IEMs) and in arenas all three stages are usually coverable from the main stage RF equipment. But when comes to stadiums, this hasn’t always been possible.

“In stadiums, the ‘C’ stage is usually at the opposite end of the pitch to the main stage. This, along with location specific radio pollution, meant we needed to come up with a solution for local RF transmission for the band and crew’s IEMs on the C stage.” says the band’s RF engineer Ali Viles. “It was imperative that the radio coverage to all the stages was seamless, without any signal loss or dropout. We looked at several options, but all involved complex additional infrastructure and considerable expense.”

However, Sennheiser came up trumps with an inspired solution, based on the company’s Media Control Protocol. Introduced in January via firmware upgrades to the 2000, evolution wireless ew 500 G3 and evolution wireless ew 300 G3 series, the Media Control Protocol enables rackmount devices of Sennheiser products to communicate directly with control units within an Ethernet network (UDP/IP), allowing them to be integrated into larger audio/video control systems. The units can then be remote-controlled and monitored directly from a central control panel, via an iPad™/iPhone™ or mixing console. 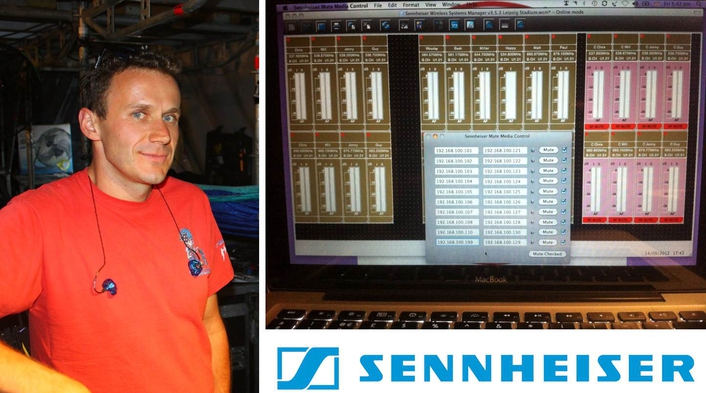 “When Ali came up with this challenge, it was a great opportunity to use the Media Control Protocol to solve a particular problem,” says Sennheiser UK engineering and technical services manager Tim Sherratt. “It was the ideal kind of application for the protocol and there was no sense in employing an expensive hardware solution when we could achieve the same result in software.”

“The software means that it’s possible to have a set of identical 2000 series IEM transmitters, on the same frequencies, located local to the stages at either end of the stadium and to swap which ones are transmitting at the touch of a button from a laptop,” says Ali. “As the band run through the audience between the two stages, it’s possible to switch the RF transmission between the two locations. This means that the band hears virtually seamless coverage as they move between the stages.”

He continues, “It’s a very intuitive system to implement and use, providing us with an elegant and cost effective solution to the problem we were facing.  Working in tandem with Sennheiser’s WSM monitoring software, it is possible to seamlessly switch RF transmission between the two stages at opposite ends of the stadium and remotely monitor this change as it happens. This has been in use on all of our stadium shows this year and has worked perfectly on a daily basis.” 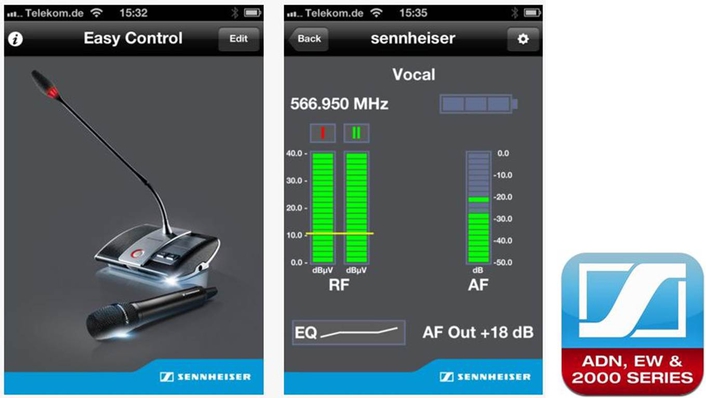 The Easy Control app is free to download from the iTunes store.