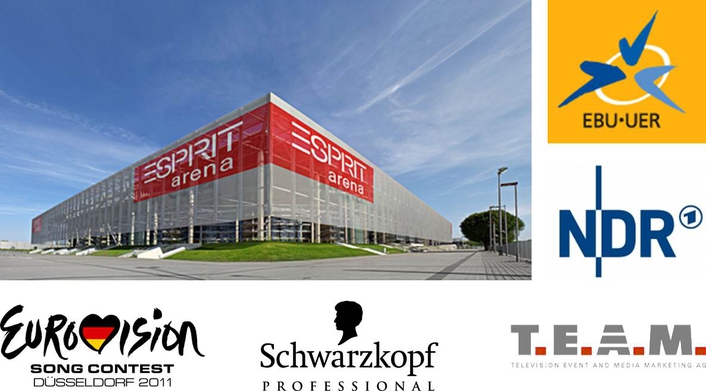 Eurovision Song Contest 2011 at the Esprit Arena in Düsseldorf
The European Broadcasting Union (EBU) on 21 October announced Schwarzkopf, a leading brand of German-based consumer goods company Henkel, as the Presenting Partner of the Eurovision Song Contest 2011 in Düsseldorf, Germany. The three shows, Semi-Finals on 10th and 12th of May and the Final on 14th of May 2011, will be televised live, hosted by the German public broadcaster NDR.

Henkel is one of the world’s largest consumer goods companies and will activate the sponsorship under the Schwarzkopf brand, which is one of Europe’s premier beauty brands, standing for quality, modernity and innovative strength. With annual sales of 1.7 billion Euros, Schwarzkopf is the most successful brand within the Henkel portfolio.

“We are excited to welcoming the Schwarzkopf brand back in the Eurovision Song Contest family, after the successful partnership in 2009” Jørgen Franck, Director ad interim of Eurovision TV says.

"The Eurovision Song Contest is truly a perfect fit for our Schwarzkopf brand as they are both unique in heritage and professional quality, reaching millions of homes worldwide" says Björn Osterndorff , Corporate Director International Media at Henkel.

The Eurovision Song Contest has a rich tradition and heritage, dating back to 1956. It is one of the few truly pan-European television programmes transmitted live via the Eurovision satellite network, in prime time on free-to-air television, as well as online. The three shows attract a total of over 100 million viewers throughout Europe and beyond.

T.E.A.M. is a full-service sales and marketing company that specializes in exploiting commercial rights for televised content internationally. The company employs over 140 professionals at its offices in Lucerne, Switzerland, and is widely known as the exclusive marketing partner of UEFA (the governing body of European football) for its flagship competition, the UEFA Champions League, since its inception in 1992. TEAM has also extended its music portfolio with a mandate to develop, sell and deliver a new commercial programme for the Vienna Philharmonic Orchestra since 2007.

Eurovision TV is a brand of the European Broadcasting Union (EBU)The European Broadcasting Union (EBU) serves 86 national media organizations from 56 countries in and around Europe. It promotes the values and distinctiveness of public service media in Europe and around the world. It brings news, sports, events and music to your home through the Eurovision and Euroradio networks. The EBU develops and shares best practices, media expertise and innovation. It produces and exchanges rich and diverse programmes across all media.