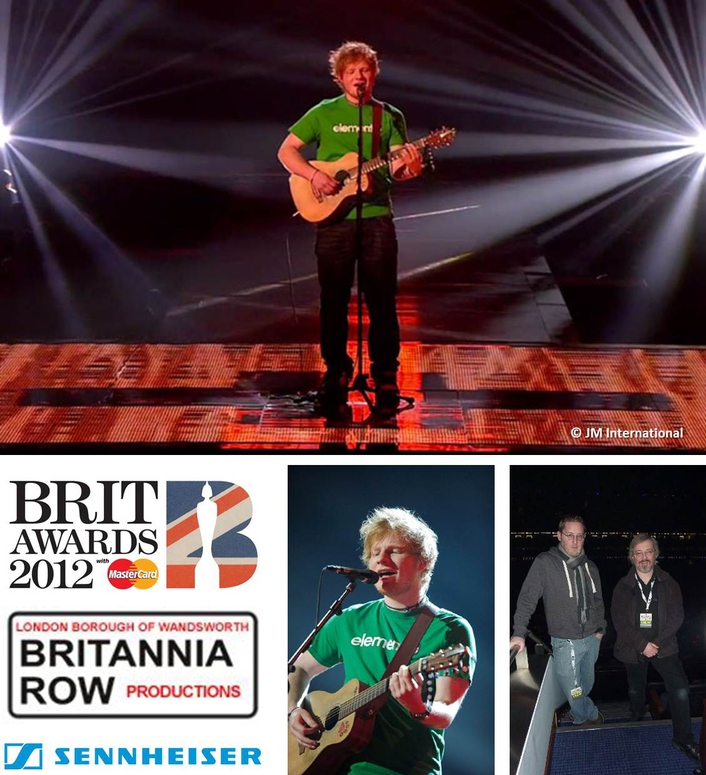 Double award winner Ed Sheeran, with his custom e 935 vocal mic
As The O2 opened its doors to the BRIT Awards for the second year, Sennheiser UK celebrated its 10th anniversary of providing support to this most iconic of British music events.

“Sennheiser has had the pleasure of assisting on the BRITs since being invited by sound designer Derrick Zieba and Britannia Row back in 2002,” says Sennheiser UK artist relations manager, Mark Saunders. “Initially, this was to support the large amount of Sennheiser equipment that was being used on the show. Since then, both Andy Lillywhite [Sennheiser UK’s chief engineer] and I have been on-site throughout the rehearsals and shows, providing technical back up to the Brit Row crews, supplementing odd bits of extra kit and, where required, providing some extra not-quite-off-the-shelf type solutions for specific performances on the show.”

This style of support allows Sennheiser to showcase the quality and reliability of its equipment and also the company’s dedication to supporting the customers who invest in its equipment, especially when specifying and putting it to use in such a critical environment as a live television awards ceremony.

“The support and presence at the BRITs also shows incoming engineers/production managers that Sennheiser takes its support/endorsement programme very seriously,” continues Mark. “Over the years the response has been hugely positive – the crews are always glad to see someone that can provide a back up to the main show crew. Very few manufacturers are in a position to - or choose to - do this, and it helps people understand that they are not just buying a box off the shelf.”

Additionally, Briannia Row’s shout system comprised Sennheiser IEMs/headset transmitter systems with multiple channels of Sennheiser 2000 IEMs in use with Coldplay, who used their own equipment.

“The support from Sennheiser is excellent,” comments James Berry, monitor engineer for Bruno Mars, who was one of the show’s performers. “We only have a two minute changeover time, which is pretty tight, and having Mark and Andy here makes the process much smoother.”

Derrick Zieba adds, "Mark and Andy's consistent support on the Brits for over a decade has truly been invaluable and puts Sennheiser head and shoulders above other suppliers in this industry. As the Live Sound Supervisor on the Brits it helps me put visiting engineers and their artists at ease knowing they have such a skilled and dedicated team working with us on site."

Other performers using Sennheiser equipment included Florence and the Machine, with a custom SKM 5200 with 5235 capsule, and double award winner Ed Sheeran, with his custom e 935 vocal mic.

Having been involved in the show for a decade, Mark recalls some memorable moments: “In 2003, we had to provide a quick fire solution so that the 20 drummers drumming along to Avril Lavigne and her band were in time throughout the performance. We also had to ensure that two side-by-side, full stages (during the years at Earls Court when there were A and B stages flip flopping acts) were fully covered by the RF and didn’t interfere with each other. There have also been various B stages, thrusts and long distances that needed to be covered, including Take That in the roof of Earls Court, and as they descended down to stage level for the performance.

“The move from Earls Court to The 02 presented certain RF challenges, but we have consistently helped to make 60-70 plus channels of RF work in tricky environments over the years and we are extremely proud to have been able to do so.”