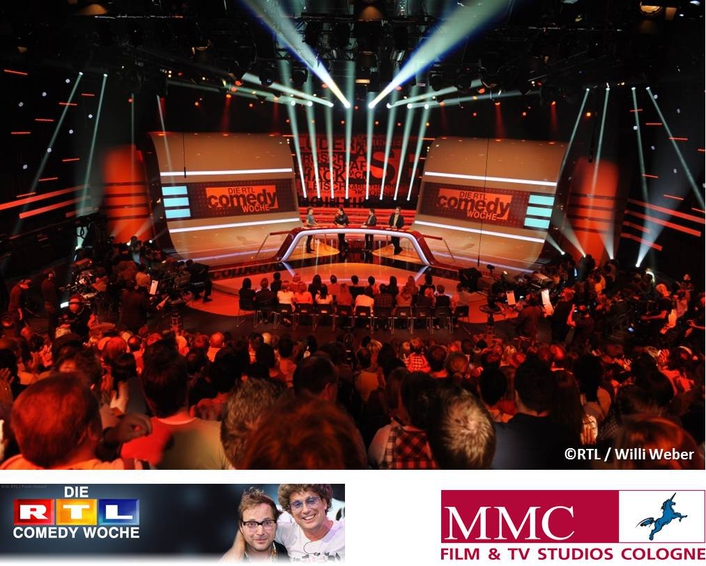 The RTL Comedy Week (Die RTL Comedy Woche) is recorded on behalf of Brainpool TV
The RTL Comedy Week is a new comedy show, where four of Germany’s best comedians meet in the MMC studio 35 and do some plain talking about current topics. Six episodes of the show will be broadcast.

When Germany’s best comedians come together, laughs are guaranteed. They have an opinion on every topic and each of them is a specialist in his field. Together, Atze Schroder, Paul Panzer, Bulent Ceylan, and Dieter Nuhr, along with various guests, will look at the current topics.

The RTL Comedy Week (Die RTL Comedy Woche) is recorded on behalf of Brainpool TV in front of an audience of almost 500 people in MMC studio 35 at the Coloneum lot location. The Magic Media Company (MMC) is responsible for the studio production of the new comedy show, as well as for the set construction—including the media technology used.

Set Construction and Media Technology
The set of The RTL Comedy Week was constructed by the MMC Art Department. The set’s decorative elements are coated with high-gloss laminated fronts. Along with the set’s lighting concept by Jerry Appelt, this gives the desired reflections at the edges and curves of the stage set.

The desk system for the comedy stars is divided into three parts. This allows quick changes on stage for the various presentation formats that are used in the show.

The central element of the set is a high-resolution LED screen, 25.2 x 15.1 ft big, with a pixel pitch of 12 millimeters (0.47 inch) and blackface technology that has an excellent contrast ratio and a particularly high uniformity.

Projections are deployed to the left and right of the LED wall and are run by Barco FLM 20 - 18.000 ANSI Lumen projectors. The feeds are carried out via three Catalyst media servers of the type V4, each of which has one Dual Head DVI output card. Consequently, 6 channels are available. All servers have SDI input boards, enabling the playbacks to be shown on the walls via the servers. All three screens can be synchronously fed.

TV-Production and Post-Production
For the HD production, up to 8 Grass Valley (GVG) LDK 8000 cameras are used – among them are one camera attached to a SuperTechno 30-crane, 4 cameras on Vinten studio pedestals, a static camera in a fixed position, as well as a networked hand-held camera. A wireless camera of type GVG LDK 8000 is used as steadicam.

The video signals are mixed on a GVG Kayenne XL (3.5 M/E) at MMC’s HD control room 13. The playbacks are handled using 4 channels of a GVG K2 Summit Server. 7 Sony XDCAM HD VTRs are used for the recordings.

For recordings on Thursdays the MMC’s tapeless workflow is used instead. When this is done, the signals from HD control room 13 are recorded during the production process onto the MMC’s central server and are immediately available for further processing at MMC’s networked Avid editing suites. Thus, the post-production can be executed very fast and effectively, so that the show can be aired in time on Fridays. 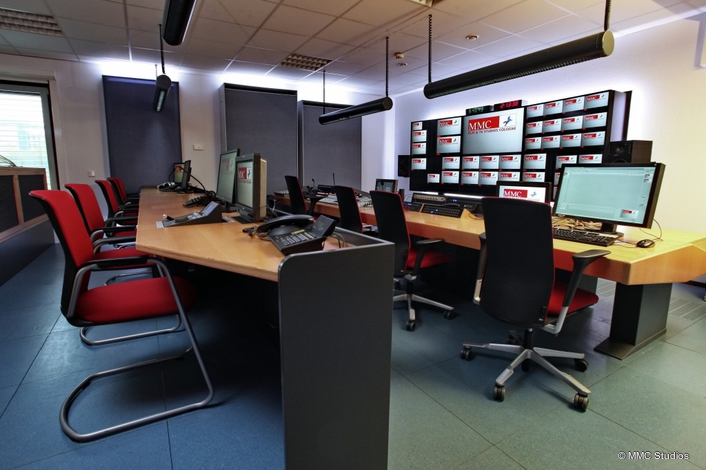 Michael Meier, Frank Hecker, and Mark Achterberg direct The RTL Comedy Week. Theo Kuhlen, of MMC, is the project manager for the show.

The RTL Comedy Week starts with an initial six episodes, every Friday at 10:15pm. Since April, 20th, 2012, the new comedy show has been on air in Germany on the RTL channel.