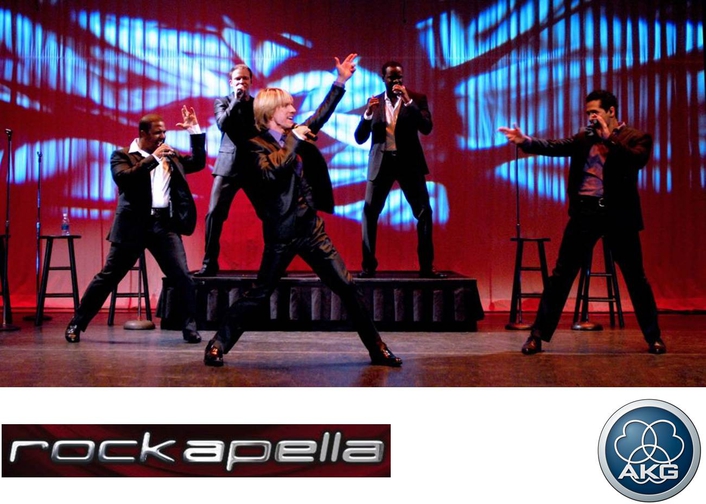 Rockapella starts their nation-wide Holiday Tour with the Boston Pops on November 27, 2011 in Iowa City, Iowa
As Glee and The Sing Off shine a new light on the vocal performance culture, Rockapella is celebrating 20 years of wowing audiences around the globe with a vast variety of musical selections spanning all genres, and utilizing only their voices for melodies, harmonies, and percussion.  Setting the stage for their annual Holiday Show Tour in 2012, the 5-man ‘band’ will travel the nation, backed up by HARMAN’s AKG DMS 700 digital and WMS 4500 wireless systems.

Along with the group’s unique solo performances, in 2012 Rockapella will be teaming up with the internationally acclaimed Boston Pops Orchestra during select legs of its Holiday Tour.  Combining the intricate harmonies of the “Where in the World is Carmen Sandiego?” theme singers with the Boston Pops, the 2012 tour will offer beautiful renditions of the world’s favorite holiday songs, as well as original music, performed a cappella and with the full Pops ensemble.

“Being a completely vocal group, the sound of Rockapella is the most important aspect during all performances, and AKG provides the guys a smooth, natural sound to showcase their talents,” said Fred Schuchman, FOH, Rockapella.  “I love the sound of AKG – it’s the best in the industry.  We’ve relied on so many of the AKG systems - from the early days of the WMS 400 series - and the group still blows audiences away with its amazing arrangements and sound in venues large and small.”

“The highest compliment I can pay AKG is, whether on stage or in the studio, their mics are a completely transparent and natural extension of my voice and performance.  They just make me sound like a better me,” stated Scott Leonard, Rockapella’s high tenor and longest tenured member.

With a 6-channel AKG DMS 700 system combined with WMS 4500 bodypack for vocal percussionist Jeff Thacher’s throat microphones, which pick up the deep tones of a full-piece drum set, Schuchman is able to control the group’s pure sound easily from his FOH position with no worry of cut-outs or interference.  Designed to deliver the best audio quality, channel quality and easy operation, DMS prevents distortion of the group’s voices, providing the audience with an amazing performance.

“When your voices and mouths deliver your entire act, your microphones are everything,” stated Thacher, who has been a member of the group since 1993.  “Having the studio-quality response and reliability of AKG’s DMS 700 mics really makes a difference.  It’s a real pleasure hearing the final product.”

“It’s very easy to warm up to AKG, which is very important when we are on the road, both across the nation and round the world,” Schuchman continued.  “When Rockapella is performing with AKG, you know the band is comfortable and confident with their sound – you know it’s going to be a great show.”

Rockapella starts their nation-wide Holiday Tour with the Boston Pops on November 27, 2011 in Iowa City, Iowa and concludes on December 18 in Massachusetts.