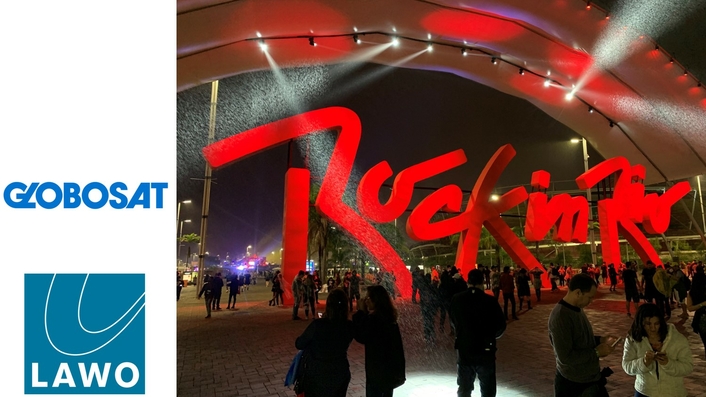 Drawing 1.5 million people to its first instalment in 1985, Rock in Rio has since ranked among the world’s largest music festivals and moved beyond its native Rio de Janeiro with events in Lisbon, Madrid and Las Vegas. It is also broadcast live by Globosat using IP infrastructure based on technology from German IP broadcast pioneer, Lawo. Rock in Rio 2019 was a ten-day event at Barra Olympic Park in Rio and featured Drake, Foo Fighters, Bon Jovi, Red Hot Chili Peppers, Iron Maiden, P!nk and Muse on the Palco Mundo stage, with Seal & Bahian Xenia, Whitesnake, Jessie J and Slayer among the acts rocking the Sunset stage.

With an audience of over 45 million viewers across Brazil, Globosat is the largest pay TV operator in Latin America and the market leader in Brazil. For producing the 2019 edition of Rock in Rio, GloboSat furnished a remote production set-up connecting the TV compound—a.k.a. “Cidade do Rock” (Rock City)—at the Barra Olympic Park with GloboSat’s production center approx. 15km away via two 2x 80Gbit/s optical fiber paths (Red and Blue). 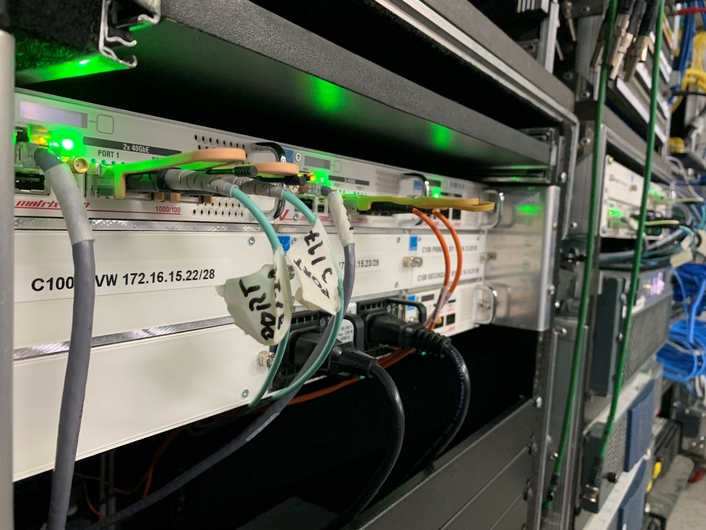 The TV compound was designed as the central point to collect all signals coming from the various stages. The smaller stages including the Sunset Stage were equipped with Lawo V__remote4 units for Video and Audio to IP conversion and signal processing, relaying the feeds to the TV compound located closely to the “Palco Mundo” main stage. 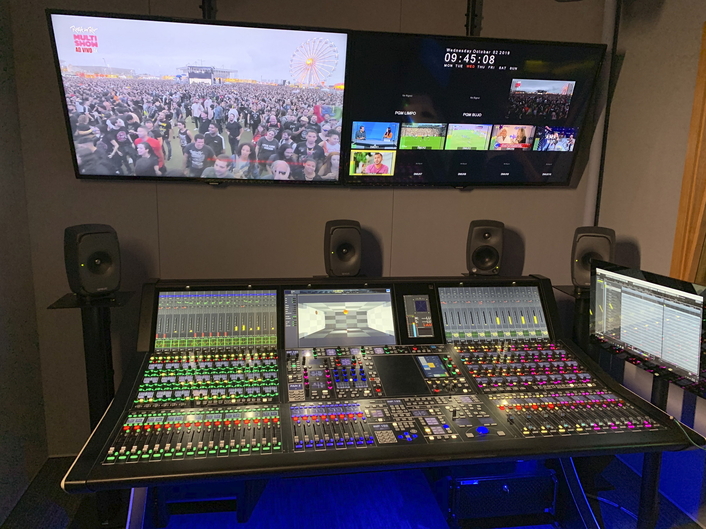 Given the relatively small distance, all 16 cameras and the audio feeds from the main stage were transmitted to the TV compound’s infrastructure via SDI. The TV compound’s redundant IP infrastructure was built on Arista 7280 switches and Lawo V__matrix for converting baseband SDI signals to IP, processing and compression of video signals and furnishing the multiviewers. One of the V__matrix C100 blades was used to generate a multiviewer mosaic with 24 PiPs whose layout was prepared with Lawo’s theWall software. The other software-defined C100 blades were dedicated to processing and conversion tasks. In total, 28 1080i HD feeds and VC2-compressed 4K feeds were used for the video production. At GloboSat’s HQ, the facility’s V__matrix infrastructure received the HD & 4K feeds plus the discrete audios from the TV compound for remote production. 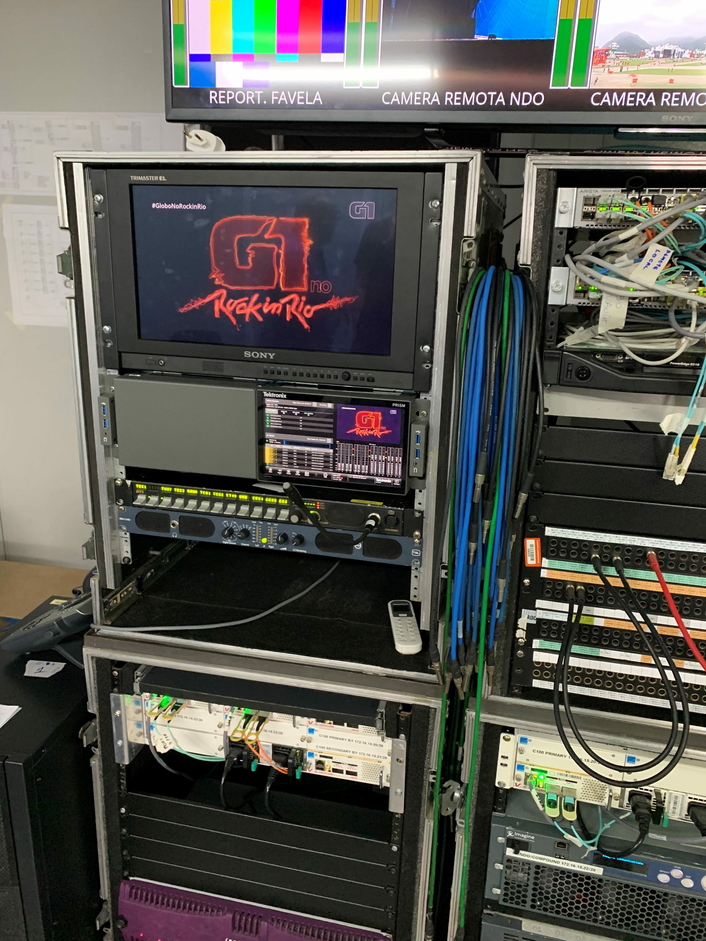 “We used Lawo to encapsulate the signals and transport them to the Globosat HQ, which allowed us to work from home, in our familiar infrastructure and to record everything,” commented Alexandre Torres, Globosat’s Development Manager. He continued: “IP has become a necessity for us. We operate dozens of channels originating from different contribution locations. IP furthermore allows us to engage in remote production, to easily automate certain routines and to share our signals with external parties. Setup times shrink and a significantly larger number of channels can be transported over a single cable at a much higher quality than in the past.”

For monitoring and ensuring signal integrity of all the ST2110 feeds of the production, GloboSat utilized Lawo’s smartSCOPE Deep Packet Media Inspection & Network Analyzing solution. Being installed on a server at main facility, it also allowed easy access and on-site monitoring at the remote TV compound via smartSCOPE’s web interface.

The immersive Dolby Atmos audio mix was produced at Globosat’s HQ using a Lawo mc²96 production console. The console and it’s Nova73 HD audio router also handled all audio routing for the complete 4K and HD productions. The sound engineers worked with 256 audio channels (128 per stage), which were recorded and distributed to various locations. The router inside a Lawo mc²96 console allows to manage up to 256 IP streams, making it ideal for routing in complex multi-site audio set-ups. 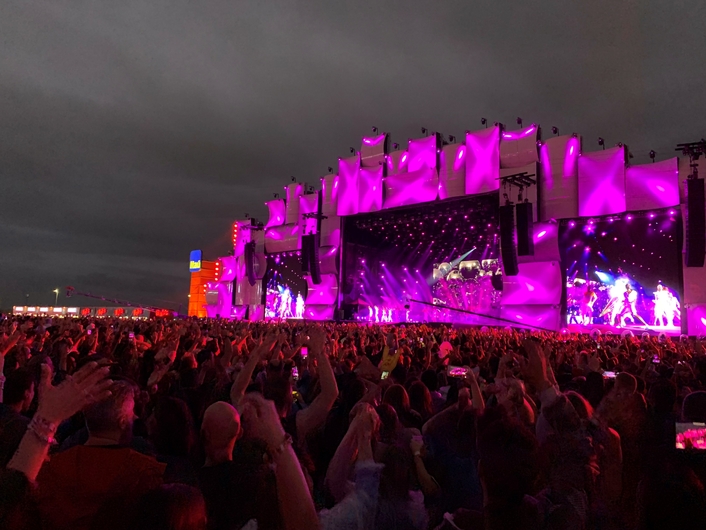 “We recorded up to 256 audio channels. We received streams, we generated streams, routed them to various locations and converted RAVENNA streams to MADI and DANTE or vice versa. This is only possible with a router like the one in the mc²96,” said Gabriel Thomazini, Operational Audio Coordinator at Globosat. “One of the aspects I particularly love about the Lawo consoles is their authentic, clear sound that is a faithful reflection of an instrument’s timbre. I suspect this can be attributed to the manufacturer’s German precision…”.

The Rock in Rio remote production was not 1st of its kind for Globo. Being renowned for pioneering broadcast in Brazil with the 1st broadcast live in 4k and Dolby Atmos in 2015, the broadcaster has been utilizing remote broadcast at various occasions including the 4K broadcast of Carnival in Rio and the coverage of the Brazil Football League.