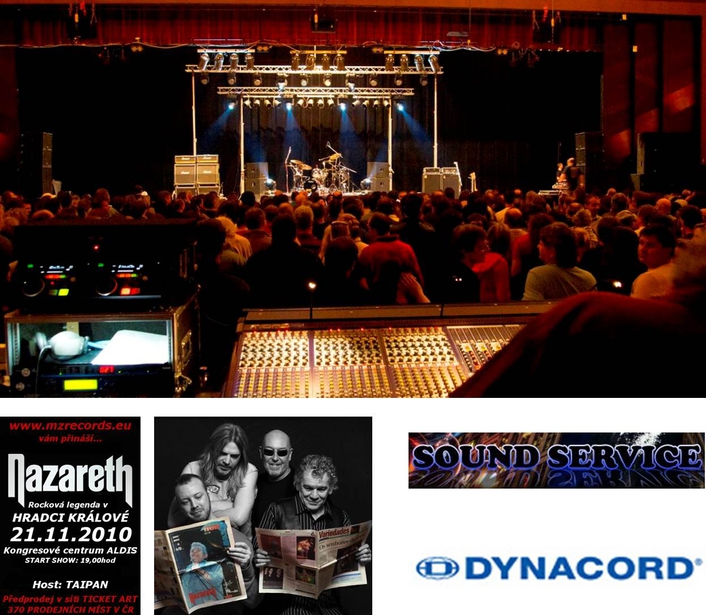 Extensive DYNACORD PA deployed at Nazareth show in Hradec Králové
2011 The legendary Scots rock group Nazareth enjoys cult status in the Czech Republic, a fact that was once again evident at their show in Hradec Králové where they sold out the 1,500-square-metre, 3,000-seater Aldis Congress Centre for the last stop of their "Still Loud 'n' Proud" tour. The ACC is a venue notable not only for its impressive size but also for the quality of its infrastructure, acoustics, sightlines and artists' dressing rooms, all of which comply with the highest international standards and make it the ideal environment for live music.

To ensure the sound was worthy of the setting, the tour organizers contracted the Dvur Králové nad Labem-based rental company Sound Service to handle the sound reinforcement. For the prestigious Nazareth production, the team led by company chief Oldrich Skalický opted for an extensive DYNACORD system, with a combination of horn-loaded DYNACORD F12, FX 20 and FX 12 boxes combined with a Cobra 2 line-array system proving the ideal solution for the Hradec Králové venue.

The system included six F12 CHW, two F 17 PWH, eight FX 20 and four F18 PWH enclosures stacked on each side of the stage. To ensure, however, that the sound was not only powerful but homogeneous, these were complemented by a cluster comprising two DYNACORD FX 12 and one Electro-Voice ZX5 enclosure flown centre-stage. "This cluster allowed us to reach the furthest row of the balcony," explains Sound Service's Oldrich Skalický. For the foldback, two DYNACORD CXM15 and two D12 speakers as well as a pair of Electro-Voice TX1122 FM wedges were used. Control and supervision of the loudspeakers was provided by three DYNACORD DSP244 controllers.

The sound reinforcement concept involved approaching separately the needs of audience members standing front and side of the stage and those of the seven hundred seated in the balcony. A further challenge was posed by the enormous size of the stage, which required the deployment of a Cobra compact line array system from DYNACORD to plug a hole in the coverage. "We used it to provide side fill," explains Oldrich Skalický. "Despite the breadth of the horizontal coverage required, we were able by this means to ensure that the stage and the area directly in front of it were supplied with powerful sound – much to the delight of the performers as well as that section of the audience." Apparently Nazareth FOH man, Phil Griggs, was equally impressed, and said so, praising specifically the "performance, sound pressure and headroom" of the system – a compliment from one who knows whereof he speaks!