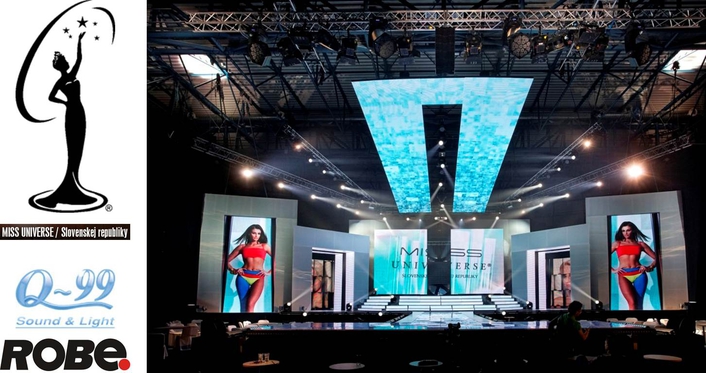 On top of the general looks, there were the specific requirements of any beauty pageant
The 2012 Miss Universe Slovak Republic was staged at the National Tennis Centre in Bratislava, and saw an aesthetic departure from previous years with a stripped back, streamlined, high-tech look onstage with multiple LED walls and panels and a shrinking perfective set.

Kubánka was given an open brief as to how to light the show. He used Daniel Šichman’s raw, stripped back set as the visual starting point, complimenting it’s clear linear cuts and shapes with a futuristic styled lighting rig to match.

On top of the general looks, there were the specific requirements of any beauty pageant, including  to light the girls in flattering skin tones and with no shadows on their faces for the cameras. As always in a colour temperature sensitive environment like this, the CRI of the fixtures was crucial  – another area where Robe scores really well. 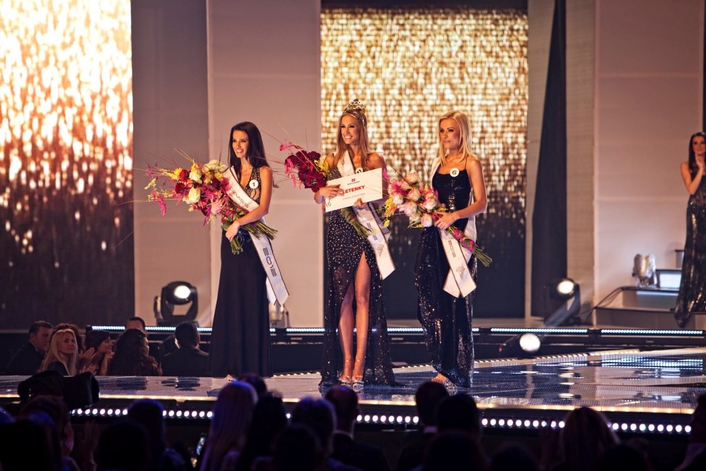 The challenges included lighting first and foremost for live TV and also for a capacity  audience of 3,500 people.

In addition to the contestants, there was live entertainment from an award winning line up of bands including  Chinaski from the Czech Republic and  Slovakia’s popular Desmod and No Name, all of which needed their own distinctive lighting.

This was no problem for someone of Kubánka’s experience and savvy .. specially with the help of all the Robes!

The fixtures were dotted around on five trusses arranged in a fan shape above the stage, with some on the deck below and around the set.

Robe has been Kubánka’s moving light of choice for some years. He specifically likes the latest ROBIN products and the idea generally of smaller, lighter and brighter fixtures, which is a key aim of all Robe’s on-going product development.

“They are reliable, powerful and really well designed,” confirms Kubánka, adding that the streamlined look of the fixtures themselves also makes them ideal for being in full camera shot. 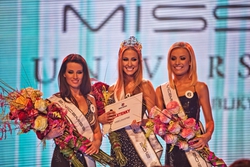 The ROBIN 300 Beams were placed on the floor around the steps of the stage – their expedient size perfect  for this positioning. They were used for powerful in-camera aerial effects.

The MMXs were rigged upstage and used for powerful back lighting effects and painting the stage floor with various patterns and textures.

Kubánka introduced enough glamour and magic to the picture, but also kept it clean and free of distractions,  all achieved with great style and flourish.

All the lighting was run via a grandMA2 full size console operated by Martin Kubánka and the show was directed for TV by Tomas Eibner and broadcast live on STV1.

The DOP was Vladimir Durkansky and the video effects were operated by Michal Brna using another grandMA2 full size.

Once again it was one of the highlights of the year for Slovakian TV attracting record viewing audiences.

Twenty-four year old Ľubica Štepánová was crowned Miss Universe Slovak Republic 2012 and will go on to represent her country in the final in December.

It’s a Beautiful Thing for grandMA
Miss Universe Crowns Clea...Com as Queen of the Scene
Robe the Exclusive Moving...ght for Carmen at Masada