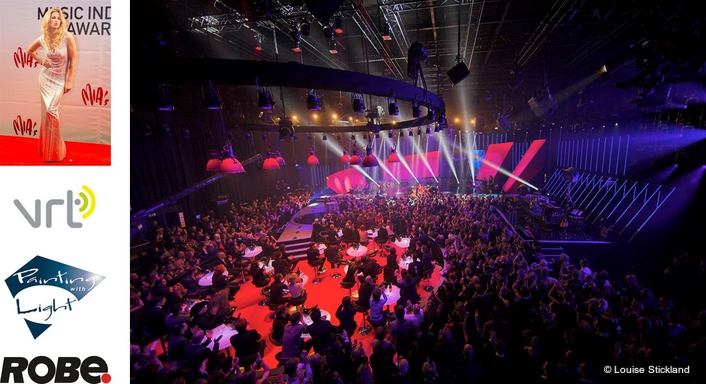 Lighting was designed by Luc Peumans from Painting With Light. The rig included 60 x Robe ROBIN Pointe and 36 x ROBIN LEDWash 800 moving lights which were a vital element of Peumans’ vibrant design for the all-action show that included nine live performances and saw the presentation of the Awards.

The studio space was designed with a circular Green Room Area where all the artists and nominees sat for the show. There were three stages as well as a very enthusiastic live audience of 800 music fans and multiple cameras in the space.

Above the main stage, two curved trusses were installed, sub-hung on the studio’s trussing mother grid, and 35 of the Pointes were rigged onto these and used as the main effects lights.

“They gave me so many possibilities in terms of look, colour, etc.” says Peumans, who really appreciates their powerful beams, numerous effects, and the fact that the Pointe can be used as a wash, a beam, a profile and an effects unit. It’s an absolutely ideal tool for this type of show, where the pressure is on to make all the artists look different for their live slots and cover all areas of the studio for multiple camera angles.

Another 16 Pointes were positioned on the larger of two elliptical shaped trusses above the main stage, and the remainder were on the floor along the back of the main stage where they made striking aerial effects.

The LEDWash 800s were dotted around the studio for set and audience washing,  with nine in a 3x3 matrix for side lighting the B stage and for additional general audience filler. The LEDWashes were all fitted with the top hat attachment for extra diffusion.

Peumans likes the LEDWash 800 for its enhanced brightness, small size and zoom range which goes from 8 to 63 degrees giving a really tight, punchy beam. He finds the beam shaper module useful for lighting set pieces and other specific areas.

Peumans has used  Robe products in his work – which embraces a heterogeneity  of genres like concert touring, large scale musicals, special events, theatre and TV - for some time, and particularly since the launch of the LEDWash series in 2010.

The first time he used the new Pointes was in November on a TV special celebrating 200 years of the Dutch Kingdom (monarchy) at the Scheveningen Circus Theatre.

The Pointes and the LEDWash 800s were all supplied to the MIAs by PRG Belgium, and will stay in the studio for another four weeks for the Eurovision Selection series of programmes …  also being lit by the very in-demand Peumans!

After this year’s MIAs, the winners, VIPs and guests partied well into the night in an extensive three-roomed after-show area set up just across from the studio which featured another great lighting design … this time by Thomas Boets, another leading Belgian LD and well known for this work on the I Love Techno event. 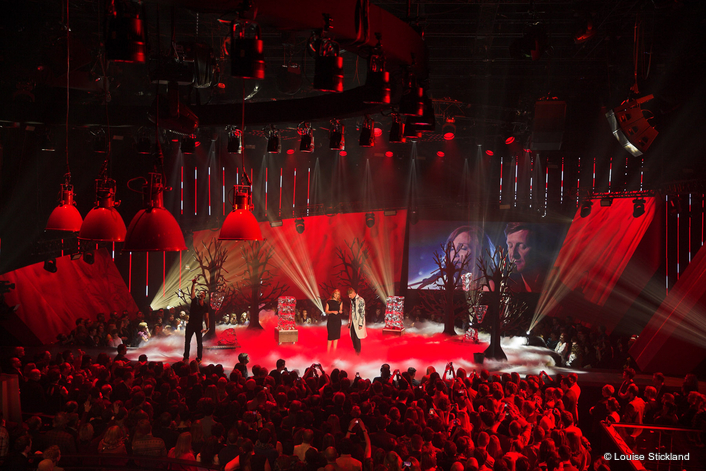